One thing that I deeply admired about old Sony Online Entertainment was that it strove to experiment, innovate, and take risks. Sometimes those special projects panned out, sometimes they did not — but it was always a wild ride, giving us things like Player Studio, SOEmote, and pizza integration with EverQuest II.

Another thing that I clocked about the studio was that it was shameless in expanding its franchises. Not only did several of its MMORPGs get sequels, but they also got several spin-offs, including solo video games, board games, novels, and a whole series of digital card games.

It’s this last project that I wanted to cover today, because I’ve always been fascinated by how SOE not only created these titles but integrated them with the MMOs themselves.

In 2006, SOE acquired digital card company Worlds Apart Productions and renamed it SOE Denver, putting it to task on an intriguing project. World Apart had created online card games for LOTRO, Star Trek Online, and Auto Assault, and John Smedley figured that this would be a perfect fit for the studio. “This is a way to expand SOE’s business into a very attractive market that is consistently growing at a fast rate,” he said in 2006.

The studio’s initial foray into adapting SOE’s titles came with 2007’s Legends of Norrath, a spin-off of both EverQuest and EverQuest II which was developed by SOE’s Denver studio.

As with most Magic the Gathering-like games, players would buy packs containing cards of various rarities (or earn them via gameplay) and assemble decks for duels and tournaments. Legends of Norrath wasn’t a complete rip-off of Magic, as it offered a few different win conditions and the ability to create a customized avatar, but overall it didn’t stray far from a proven formula.

“Great care was taken to capture popular characters, items, monsters, and even raid encounters from the EverQuest games,” said the studio in a 2008 interview.

The actual innovation didn’t come from the gameplay but rather how the card game related to its MMO parents. Some of the most desired cards in the game were loot cards that actually unlocked items in EverQuest and EverQuest II. And the MMOs themselves would encourage players to jump into the card game with the ease of a single click of a button. There definitely was a symbiotic relationship going on, expanding the franchise while keeping players within this connected ecosystem. However, if players wished, they could access the game separately via a standalone client.

SOE pushed to elevate Legends of Norrath to the esports level, hosting a GenCon tournament in 2008 with a $100,000 prize pool.

Legends of Norrath proved to be popular, with over one million matches played by the summer of 2008, and SOE started churning out new sets at the rate of three per year. The first set was 2007’s Oathbound, while the last set, the game’s 16th, was 2013’s Drakkinshard. Following this, the game coasted without any active development (SOE Denver was closed in 2011) until it was shuttered on August 17th, 2016 following SOE’s transition to Daybreak Game Company.

It wasn’t long at all before SOE Denver started working on its second adaptation, this time for Star Wars Galaxies. In August 2008, the first set of the trading card game, Champions of the Force, launched with over 100 cards. As with Legends of Norrath, SWG: Trading Card Game offered integration with the MMO in the form of loot cards. Also like its forebear, Champions offered both a single-player mode and PvP duels.

Players could pick either a Jedi, Rebel, Imperial, or Sith to play and form up a deck that contained both archetype-specific and archetype-agnostic cards. There were quests to be completed, tricks to be used, and fights to be won.

In 2018, we received word that some fans were working hard to create an emulator to run the trading card game. It’s still being worked on, and you can play it today if you don’t mind a few bugs!

Following the release of the first two games, SOE went on a tear to see where else the trading card genre might take root. Free Realms got its own simplified version in 2009, which continued through five series (sets) of cards.

What was really interesting about this card game was its “Duelist On Demand” service, thanks to a collaboration with Topps, that allowed players to create cards using their own Free Realms characters. These cards could then be used and traded within the game itself. 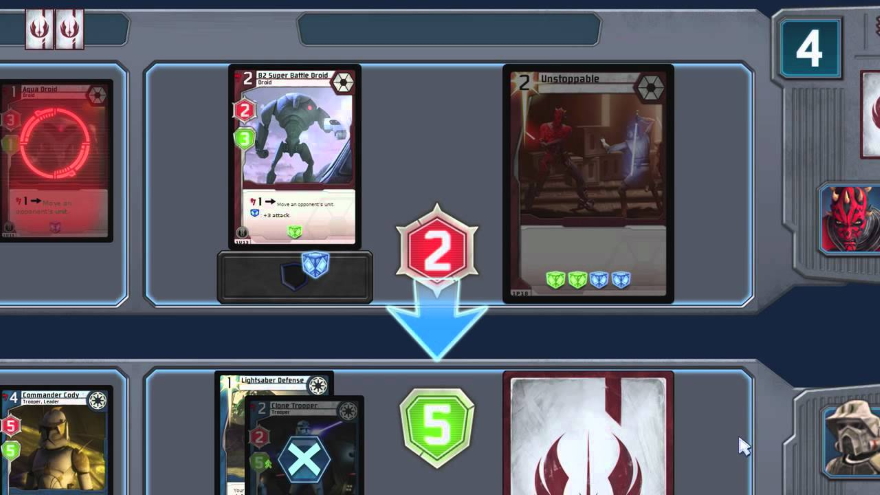 Another one of SOE’s kid-friendly MMOs, Clone Wars Adventures, dabbled with two different card games that were included in the game itself. These were Card Commander (a sort of rock-paper-scissors minigame) and Card Assault, which was very much like the Free Realms Trading Card Game.

One oddity that I wanted to include in this column was a mention of the Stargate: Trading Card Game, which had nothing to do with Stargate Worlds (which wasn’t an SOE thing anyway) but rather existed as a standalone online card game that SOE ran for a few years. It came out in 2007 — mirroring a physical version that also released that year — and expanded to include a total of three sets. By 2009, SOE took the game offline, leaving only the physical card game behind.

Of course, this is all the cut-and-dried history of these games — I’d like to hear the living stories of your experiences! Did you play any of these digital card games? What are some of your memories about them? Take some time to share those thoughts in the comments below.