It’s been a couple of days since Mortal Online 2 made its way into launch, and the devs at Star Vault are starting the process of turning knobs to reflect the reality of a released game. The latest hotfix has addressed matters like client crashes after players are stuck in login queue for 20 minutes as well as adding in more wildlife for players to hunt in the world, lowering the amount of gold that can be taken out of Haven, and reducing the sale price of Haven bandit heads in an attempt to make the starting area less competitive than the mainland of Myrland. 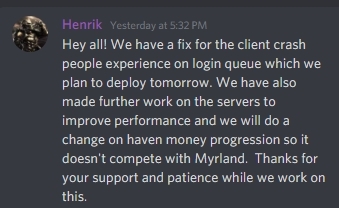 Meanwhile, the game itself seems to be coming together well overall: The Reddit community for the game features some excellent memes and some helpful replies and tips, while Steam Charts shows the game hitting nearly 8,000 players in the last 24-hour peak and over 4,000 players online at the time of this writing. There are detractors, of course, with posters in the MMORPG subreddit calling attention to the game’s monetization and its laggy experience due to server location. Steam user reviews, meanwhile, sit around the “Mostly Positive” mark at the moment.

For more impressions on Mortal Online 2, make sure to check out our latest Fight or Kite article as well as yesterday’s brief starting experience stream.

Lost Ark’s Destined for Destruction drops the Destroyer and Deskaluda

Flyff Universe can now be accessed via a browser, plans to...