While I like many survival mechanics, I’ve struggled to get into actual survival games. Despite that, I’ve kept one eye on the early access title Craftopia, as I was impressed by its broad feature list and attractive art style.

Thanks to yet another free month of Game Pass for PC (they give those out like candy), I finally got my chance to try Craftopia. And let me tell you: Absolutely nothing could have prepared me for what awaited me in this beautiful dumpster fire of a game.

When I first logged in, I started by going through and tweaking the settings, as I do in any new game. I immediately noticed there was a toggle to disable your character’s “feces production.” When a game starts with a poop toggle, you know you’re in for a wild ride.

When a game starts with a poop toggle, you know you’re in for a wild ride.
After character creation, I was confronted with a jolly, candy-like button. Seeing no other way to progress the game, I hit the button and promptly discovered that it triggered a nuclear holocaust that destroyed the planet Earth. My character than arrived in heaven(?), where she was told that the gods(?) were granting humanity a second chance in the paradise world of Craftopia.

I swear that I am not making any of this up.

Not that it really matters, but I’d also like to point out that while the central conceit of the game is that your character comes from the Earth we know, it does still offer the opportunity to play as several fantasy races. My character was an Elf — you know, one of those Elves we see all the time here on Earth. 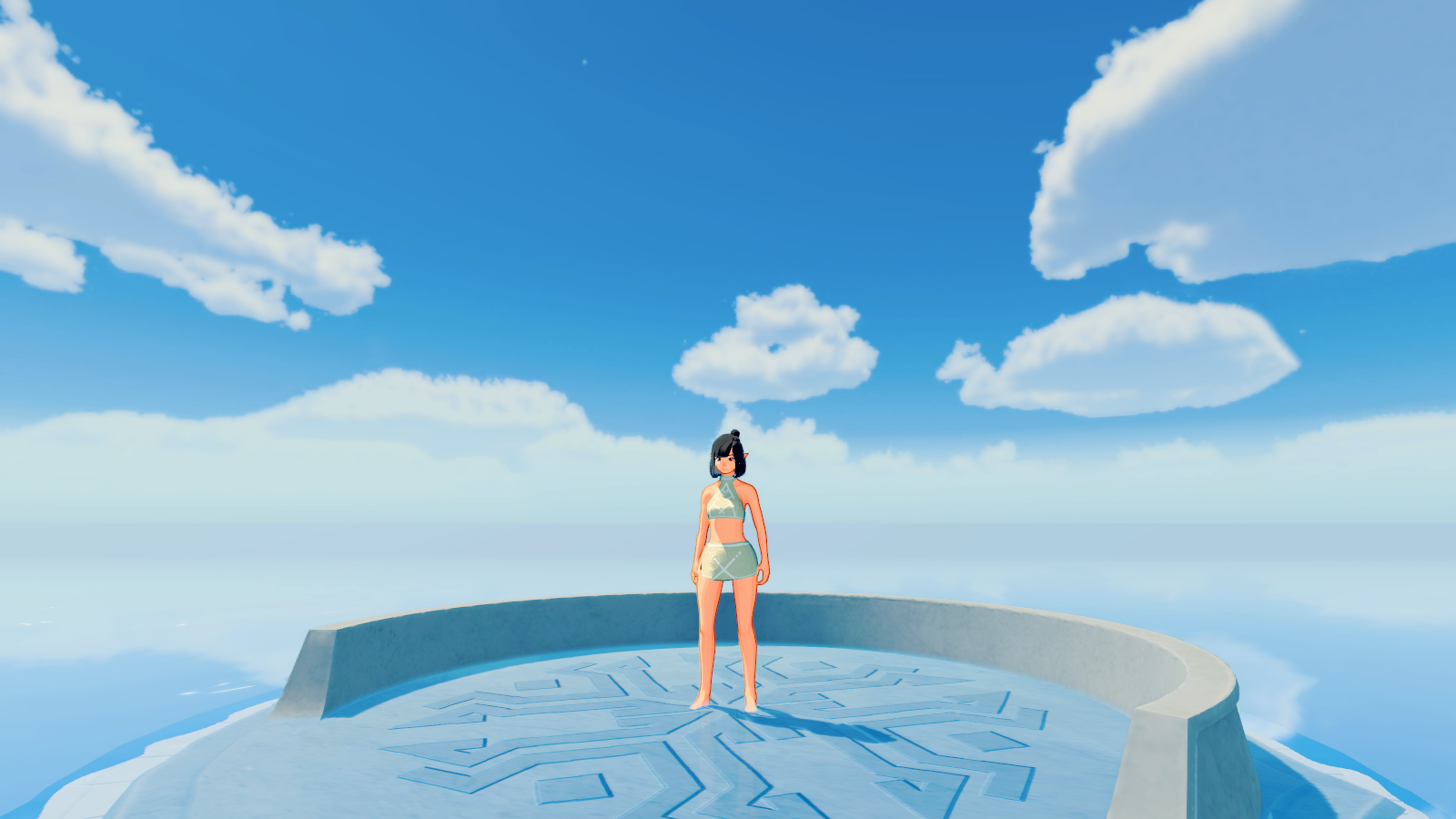 As a further aside, the game also features four sex options instead of the usual two, including “unknown,” which I guess is pretty progressive. This doesn’t appear to have any gameplay effect — even visual — but I’m sure some will appreciate the option. You can also equip both male and female clothes on any character, though it will change your character’s whole body shape if the clothes don’t fit the body type you choose at character creation. Might be a good option if you want to role-play a non-binary character, I suppose.

Anyway, after being vaulted out of heaven, my omnicidal Elf girl arrived on a tutorial island covered in resources to harvest and set about the standard survival game grind, including literally punching rocks and trees to harvest logs and stone.

Leveling is breezy, and I quickly had a build combining magic and archery that I was pretty happy with. I couldn’t stop thinking about how it took less than an hour for Craftopia to deliver a more satisfying Arcane Archer than Fifth Edition Dungeons and Dragons, but I digress. There’s also a “high five” skill that lets you buff your allies by hitting them with melee weapons, so… there’s that.

It never felt all that challenging; my hunger meter went down so slowly it might as well not have been there, and the monsters didn’t feel particularly threatening. But that was kind of nice as this definitely feels like a game that’s meant for relaxation, not testing your mettle. Before long, I’d arrived on my second island, which was much the same as the first but for being more spread out and featuring some NPC villages.

By this point it was already clear to me that Craftopia is, in a word, a mess. Animations are sluggish and awkward; half the time my attacks missed targets that were directly in front of me. Also, stairs don’t work. Your character just flails between going into the wall-climbing animation and running into them like they were a brick wall. The only way to get up stairs is to try bunny-hopping up them and hope for the best. 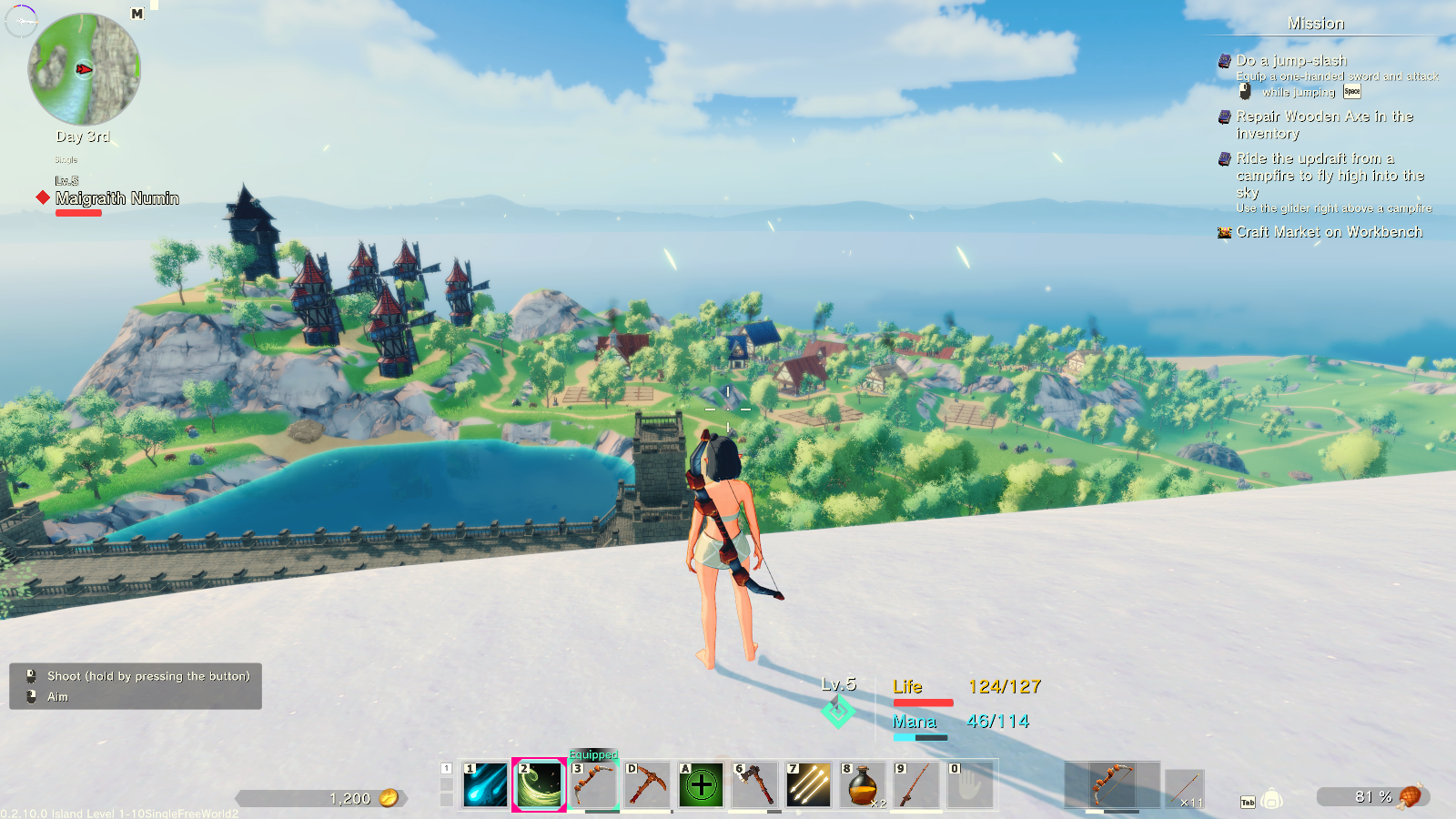 Early access is early access and all, but Craftopia has been around long enough you’d think they’d have gotten stairs working by now.

By this point all hope of my taking the game at all seriously had gone out the window. Here’s a fun fact about me: I almost always play absolute goody two-shoes in games. The worst I usually get is somewhere around what D&D players would call lawful neutral. But if my immersion in a game is completely broken and I just stop caring, then I go full psychopath murder-hobo.

So anyway, I started hunting villagers for sport.

Becoming a murderer is as surreal as anything else in Craftopia. I attacked women and children in broad daylight in the middle of town, and none of the other NPCs reacted at all. My victim did flee in terror, the first woman letting out anguished cries of “Do not interfere with the watering!”

I also discovered that every human NPC appears to have the exact same loot table. They all drop a single chicken egg. Nothing more, nothing less. Although I think I forgot to murder any merchants, so I suppose they might have better drops.

From that point on I just sort of wandered and did my own thing. Craftopia features both climbing and gliders, so traversal can be quite enjoyable. The climbing animations can be pretty janky, but it mostly works, most of the time.

At one point I spotted a tentacle poking out of the water near the shore, so I pulled out my fishing pole and promptly fished up a kraken that out-leveled me by an intimidating margin. I thought I was done for, but I then discovered the kraken couldn’t get out of the water, so I was able to just pepper it with arrows from the shore until it stopped moving. 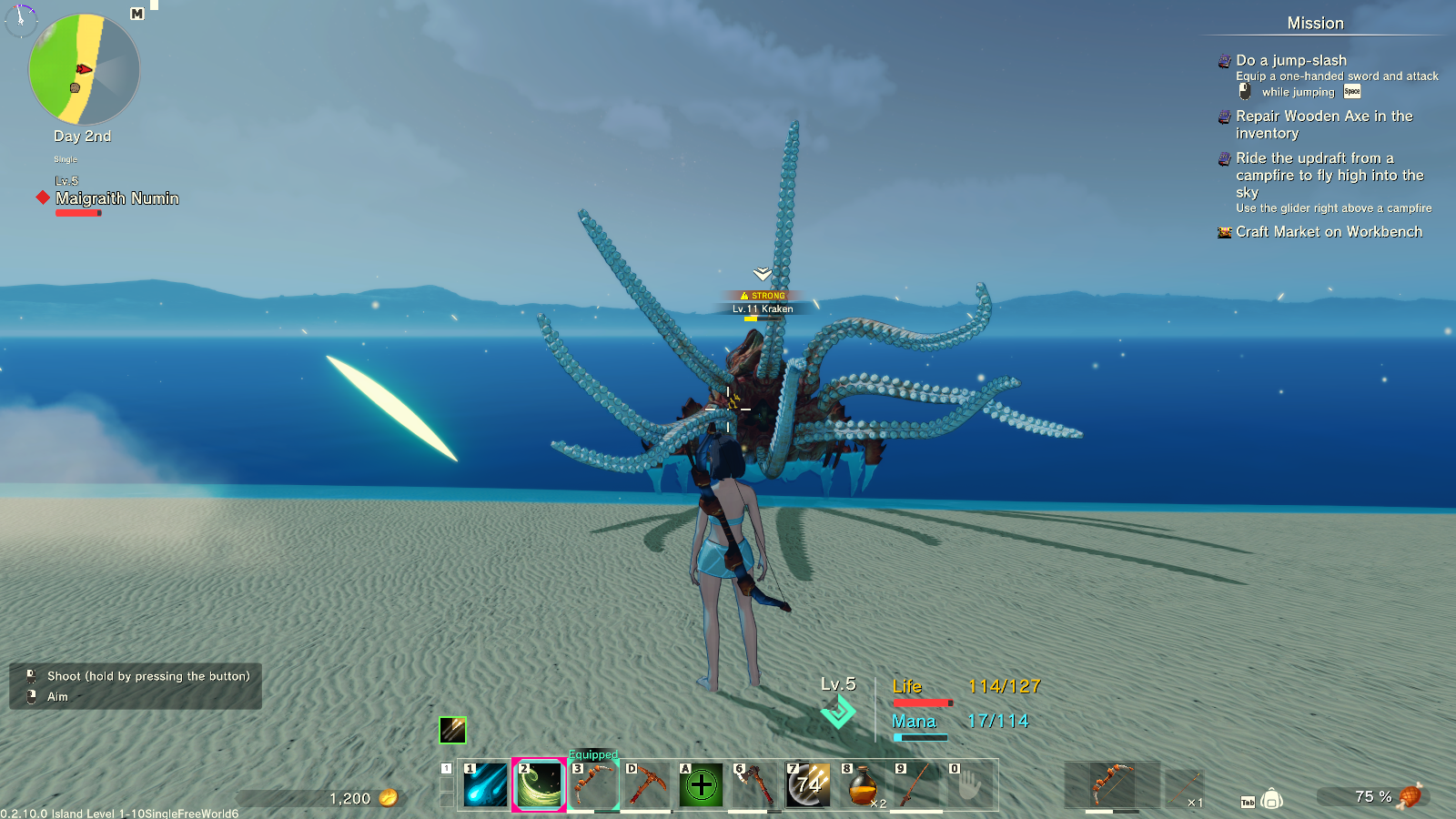 Later I run afoul of a stone giant in the hills, and I thought it I was really doomed that time, but it randomly de-aggroed mid-combat and just let me walk away. Very neighborly of them.

And that’s pretty much where I left it. If you’re wondering whether Craftopia is a good game, the answer is, “Good gods, no, not even close.” But it is memorable. This is a game that started with a poop toggle and then got weird. It’s surely not boring.