Ask veteran MMO gamers who the star of Guild Wars 2’s first living world season was, and you’re not likely to hear names like Braham, Marjory, or Mai Trin. The most memorable character from Season 1 was definitely Scarlet Briar. She has, thus far, been absent from the story, but with today’s release, Clockwork Chaos, players who missed this originally limited-time content will finally be introduced to the unhinged Sylvari engineer!

END_OF_DOCUMENT_TOKEN_TO_BE_REPLACED
Queen Jennah has invited everyone to Divinity’s Reach — which NPCs keep referring to throughout the episode as “DR,” which somehow sounds like a perfectly natural thing when a player says it, but feels weird and forced coming from an in-universe character for some reason — for a celebration of the fact that Humans are, despite all odds, still alive. Among the attendees, the commander spots new friends Rox and Braham. As a part of the festivities, Jennah is showing off her spiffy new watchknights, mechanical soldiers who are here to prove that Asura don’t have a monopoly on magi-tech robots. Unfortunately, the demo is rudely hijacked by the Aetherblade pirates, this time led by a mysterious hooded figure, who soon identifies herself as Scarlet Briar.

Scarlet has often been compared to DC comics’ Joker or Harley Quinn — the brightly colored pigtails certainly underscore the latter comparison — and I think it certainly fits; Scarlet is just so gleeful and giddy about the mayhem she’s sowing, giving the impression that she is completely insane, and yet she always manages to be three steps ahead in outsmarting and out maneuvering our heroes. She is probably the most fun villain ArenaNet has ever come up with, if not the most deep or original.

Can I just say that I had forgotten how much I love the design of the twisted watchwork enemies? The watchknights themselves are cool, but I love the way that Season 1’s designers made Scarlet’s twisted versions look like someone has chopped up the knights and kitbashed their parts into something completely different, and so much creepier.

As for the actual content of this episode, it felt a bit shorter to me than the already barebones previous episodes in this season when I dipped in for the press preview this past weekend. I know that the teams at ArenaNet are working with what they’ve got, restoring content rather than creating it from scratch, so there’s only so much that can be done, but this was definitely one of those releases where I got to the end and said, “Wait, that’s it?” Some of that is down to the fact that there is less busywork than in the previous chapters – that is, there isn’t as much “go out and do events in this zone until the bar fills up.” It’s always a balancing act when designing (MMO)RPG content, trying to find that sweet spot between giving players something to do and making them feel like their progress is being blocked by a grind.

Completing the story awards another 20-slot bag, as we’ve come to expect from these releases. Completing enough achievements during the episode will also award players a pair of shiny watchknight-inspired boots and a watchknight sword skin. There are also a couple of new ways to earn the endless watchknight tonic, which was previously available on laurel vendors. The fact that this reward is recycled is a little disappointing. It would have been nice to have something a little more unique, even if it just had that green glow that the twisted watchwork mobs have. That’s a minor nitpick, though, especially given the other two unique items. 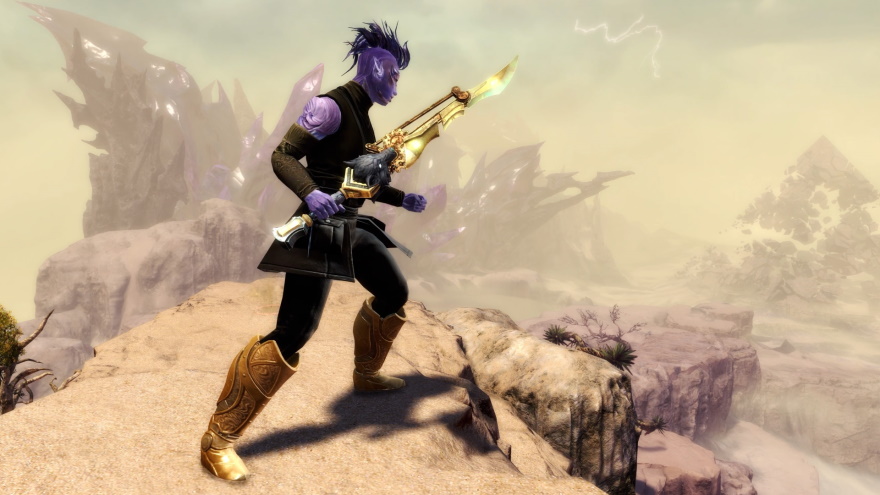 As I’ve said before, this isn’t the most compelling content you’ll play all year, but the story context it provides is incredibly important for new players, which was the whole point of reviving the season in the first place. The current story may be separated from these events by several years and a number of much bigger crises, but Scarlet’s spirit is very much alive in the recent End of Dragons story — both literally and figuratively — and it would be a shame if newer players didn’t understand the significance of those references.

If you’re excited to see Scarlet again, as well as Lord Faren in his underwear, then now is the time to log in and play Clockwork Chaos!