After these few weeks and hours playing V Rising in its early access state at the time of this column’s publishing, I can pretty confidently say that the vampiric power trip that I was enjoying is not the injection of nitrous I was hoping it would be to the overall gameplay engine.

Don’t get me wrong, I was still having a great time running roughshod on fools out there. The polling kind of worked out to a three-way tie, and with the fourth selection being so close to the other winners and a necessary step, I elected to take down all four along the way.

The V Blood hunts were all surprisingly serendipitous, actually. On the way to take down one Nicholaus, I managed to take a wrong turn and stumble my way into a fight with Polora the Faywalker, and since I was kitted up to take her down, I did so, netting myself a couple of nifty powers in the process. After a bit of random wandering, I took down Nicholaus and plopped down my study. Along the way, I managed to get myself a horse to ride around on, learned how hard steering a horse could be, and plopped down my study. I was not ready for how big that workbench was, by the way. 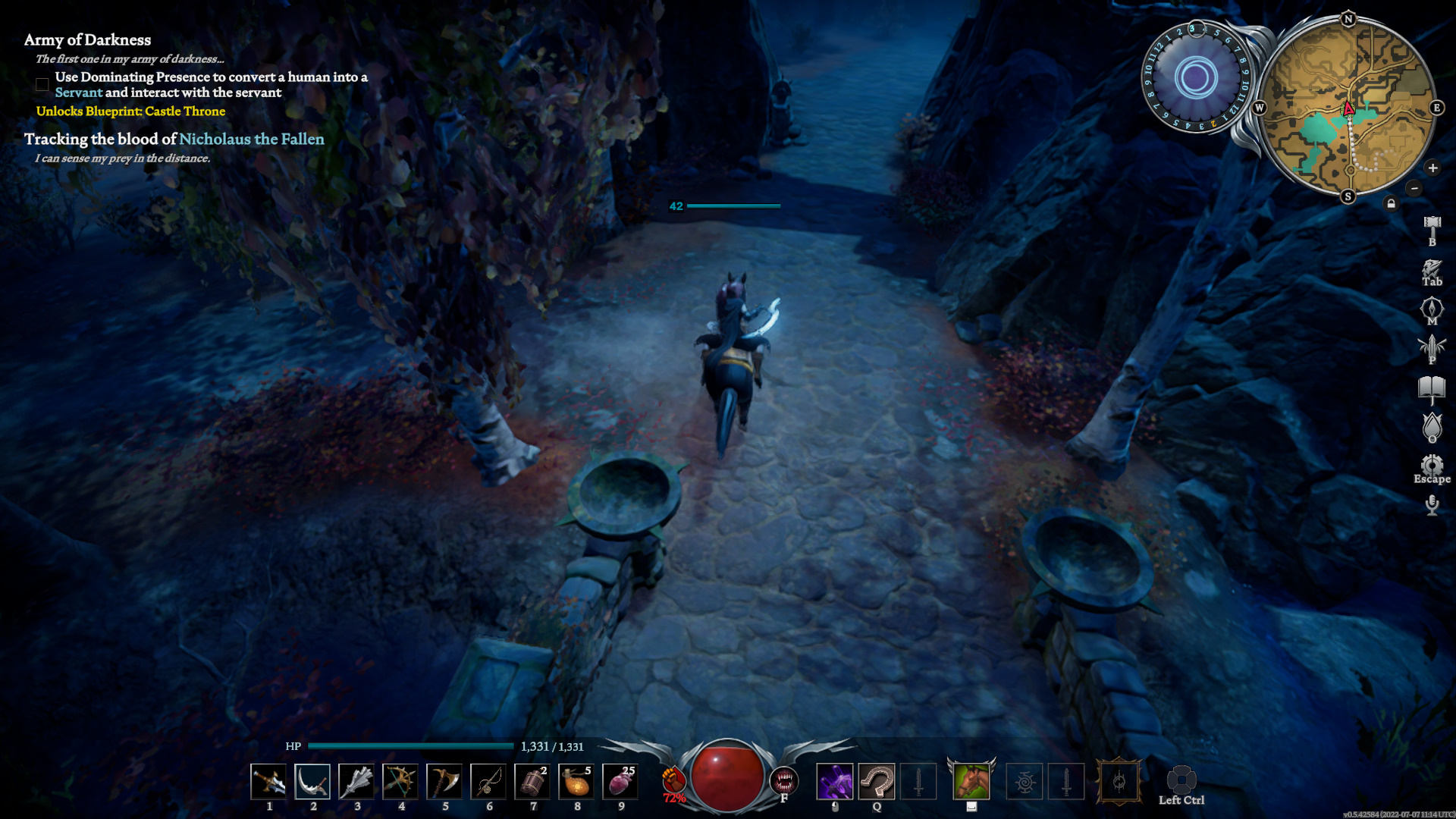 After that, I elected to track down Beatrice the Tailor simply because I wanted to get the next set of armor put together. Once again, fortune kind of inadvertently smiled upon me as during my travel to her location I ran across Christina the Sun Priestess, who just happened to be walking along the road I was traveling down. This was a pretty stern fight owing to the fact that she was healing up the adds that were once again swarming the battle, but eventually I just facetanked her, cut her down, and took her juice.

The “fight” against Beatrice was extremely entertaining. Riding into a village, effectively ransacking it, and chasing down the tailor as she tried to run at every single person she could was kind of amusing. It didn’t do her much good, of course. Nor did it do the town any favors; like any good vampire lord, I razed the village to the ground. Or at the least took down all of its denizens. 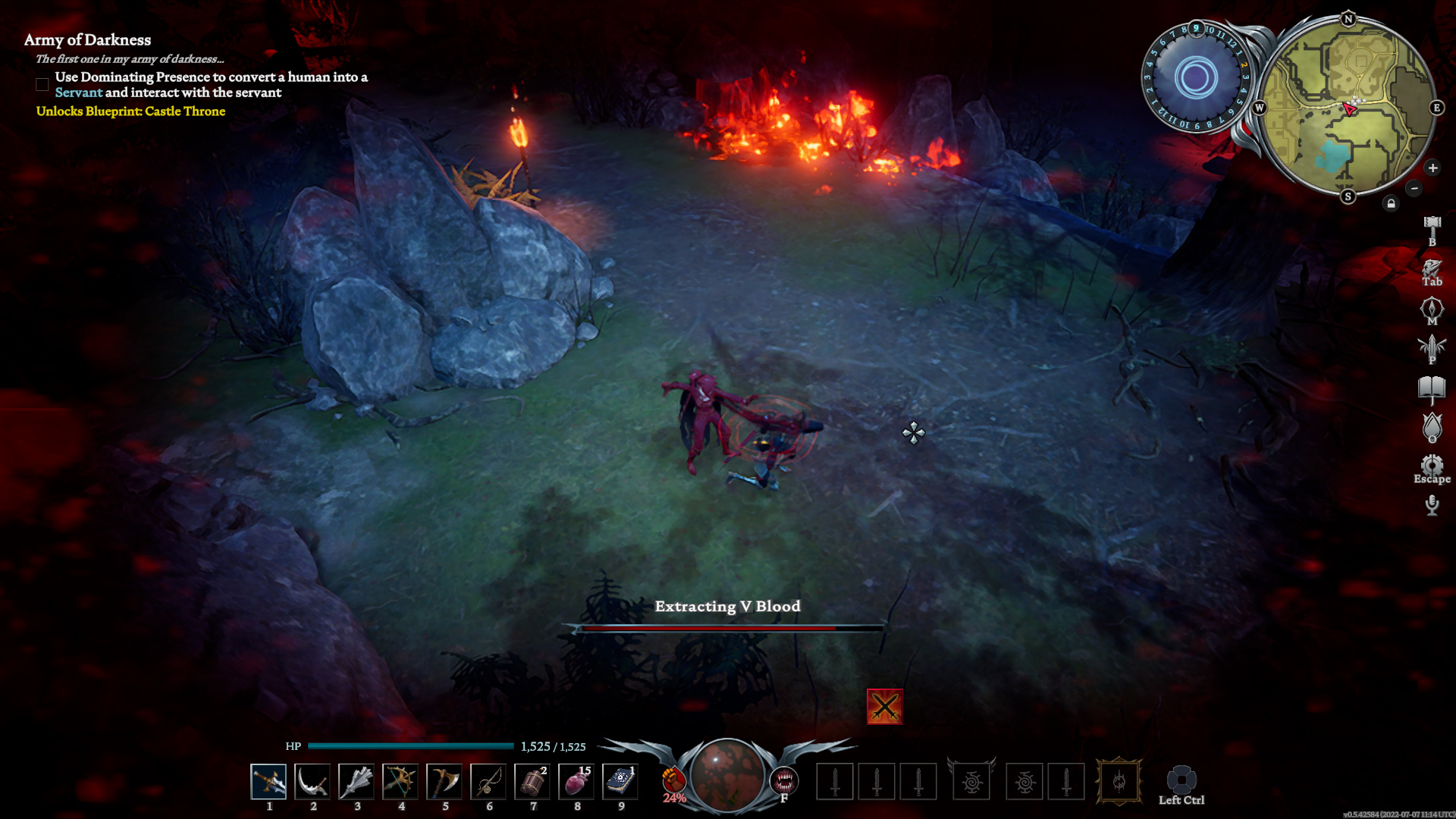 With pockets full of cotton and materials aplenty, I put together the next tier of armor. At long last, my character was starting to look a bit more like a vampire lord. At least, I’m pretty sure she was; the isometric camera angle was not really doing me many favors. Still, I was now dressed to literally kill and moved to take on Tristran the Vampire Hunter.

Even disregarding my own souped up character, the fight with Tristran was probably one of the simpler ones of the lot. he had some pretty big telegraphs and the abilities he threw out seemed to be generally pretty avoidable. Of course, having the right gear is what probably ultimately won the day, but I was kind of expecting more out of a vampire hunter.

With all of those targets taken down, the presumed final layer (or at least penultimate layer) of gear advancement was laying before me, and once again it was just another series of honey do lists to unlock the itinerant pieces and put them together. Like buying a LEGO set but with only a few bricks at a time. It was becoming tiresome and boring and ultimately not interesting, leaving me feeling like V Rising had pretty much shown its entire hand. So I uninstalled and moved on with my weekend. 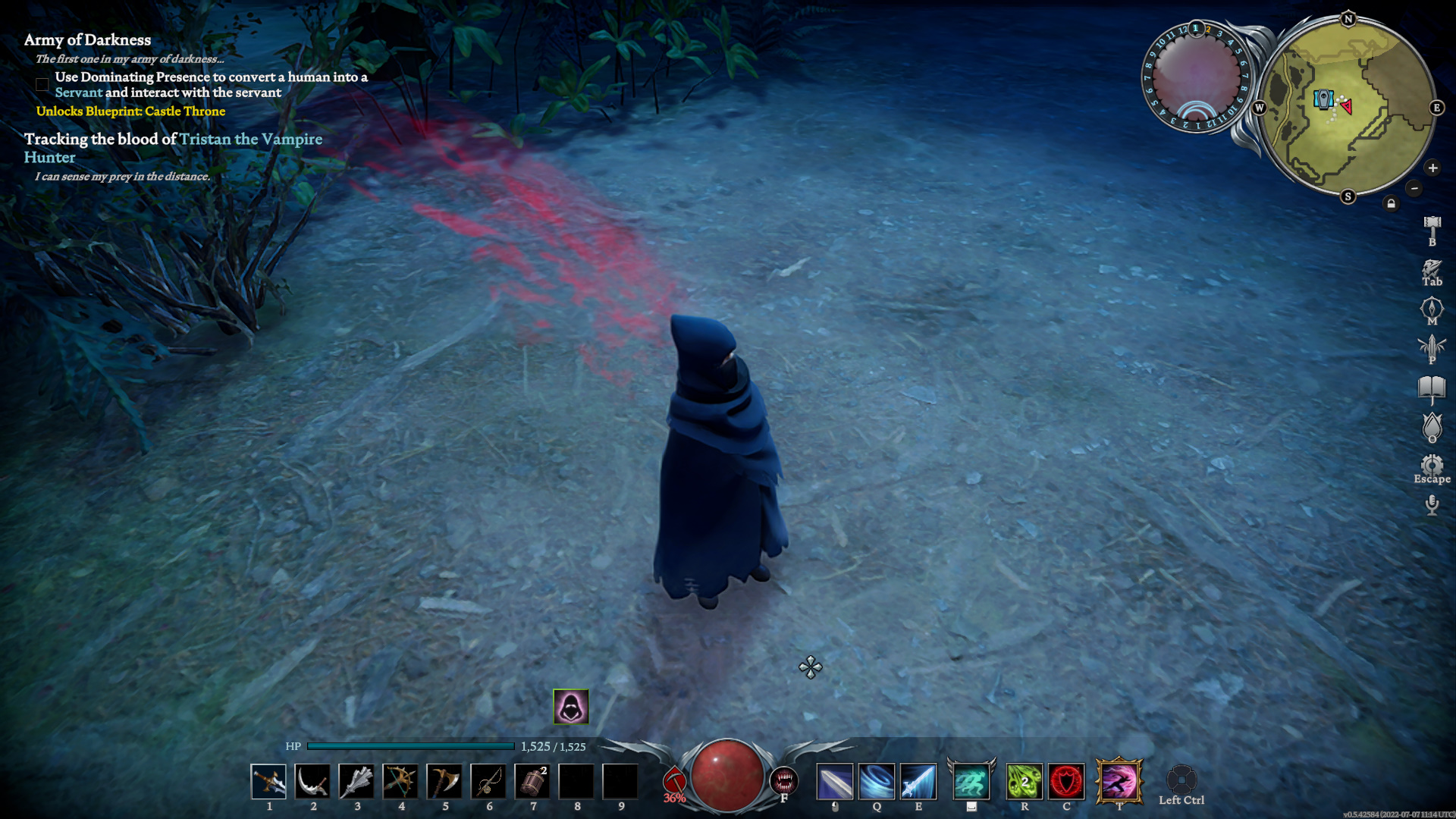 To be fair, the gameplay loops of survival sandboxes are very much short and repetitive, but the bigger problem I’m having with the way V Rising does it is the unlockable things are just so damn boring. Even by this sub-genre’s standards. Combine that with the fact that every single piece was needlessly chopped up, and then those pieces being gated behind fights that felt poorly tuned or low effort. On top of that, the move from tier to tier all felt like immense gulfs instead of a gradual curve.

All of these problems combined to make the gameplay beats of V Rising incite aggravation and annoyance as I went through the power tiers instead of feeling like I was improving. These feelings were only made more glaringly obvious after I jacked up my neck nibbler. The only way I felt like a vampire was with making myself a demigod, but even so I was still being walled off from progress. I could have been a fish monster or a celestial being or a machine gun-toting duck and it still would have been the same sensation.

Of course, there is the bookend of noting that V Rising is still in early access and so things could improve given time. However, this game also feels like it’s fallen into the same trap that Valheim has: It became a mega-hit, blew up immensely, and now the devs have to keep pace with that rapidly grown and likely very voracious playerbase. And if those appetites aren’t filled with more stuff to do – more interesting stuff – it could all just peter out as quickly as it burgeoned.

For now, V Rising is off of my hard drive and out of my life until I see some substantial progress made on the game. Maybe next time I won’t feel the need to play as a vampire on steroids. 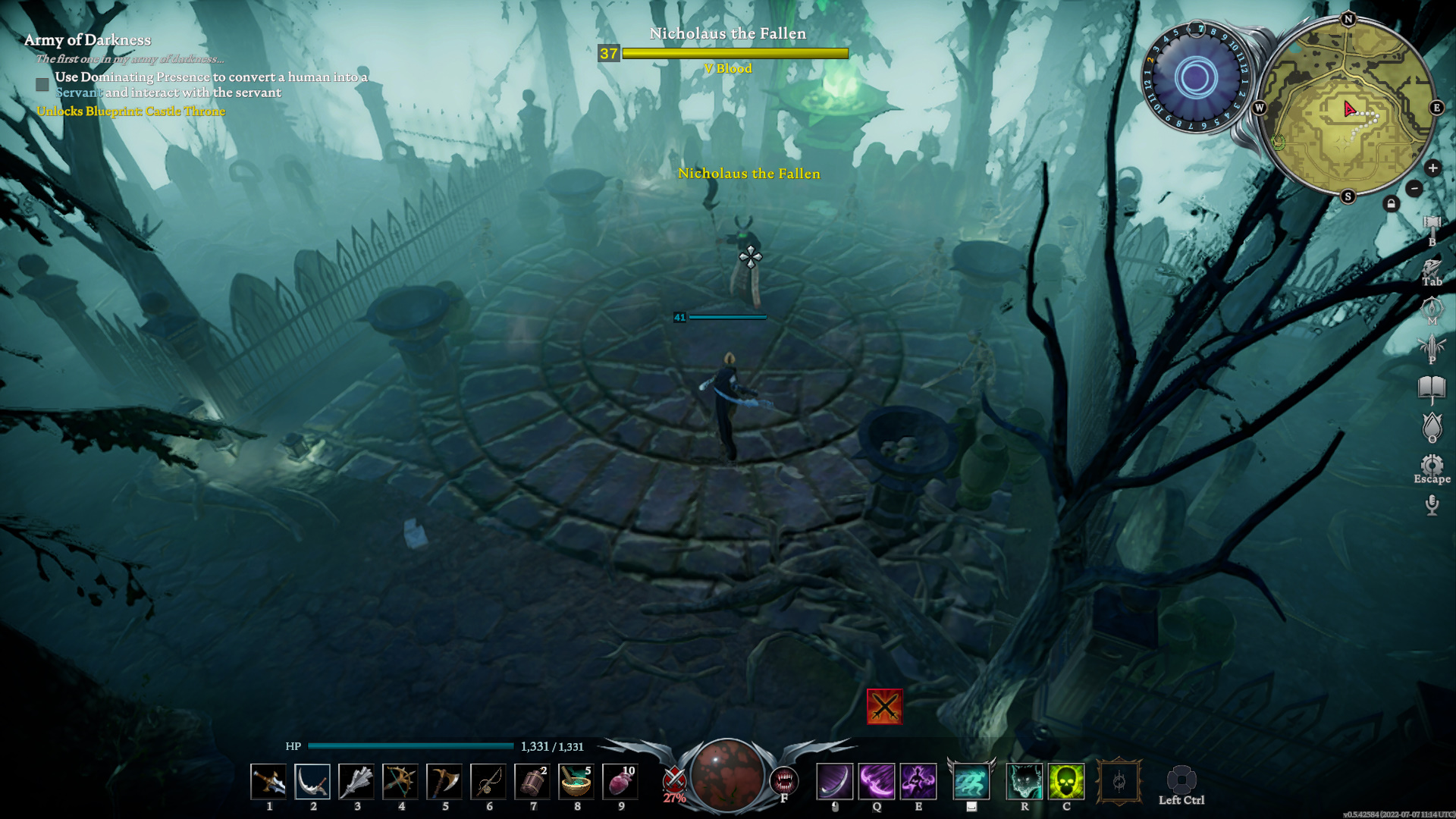 Since I’m moving on, it’s time to look forward to next month’s game, and I have to admit that I feel like I may have accidentally steered the voting. See, when I asked to choose my weird adventure, I was using the word “weird” to mean “aberrant to the usual sorts of experiences MMOs, MMORPGs, and multiplayer titles offer,” but that would have been too long to write out. Still, it doesn’t get a whole lot weirder than Chimeraland.

Don’t believe me? You can check out my recent stream of the game. Or better yet, check out this week’s poll choices, which are honest-to-goodness decisions I have to make.

What kind of character should I make? 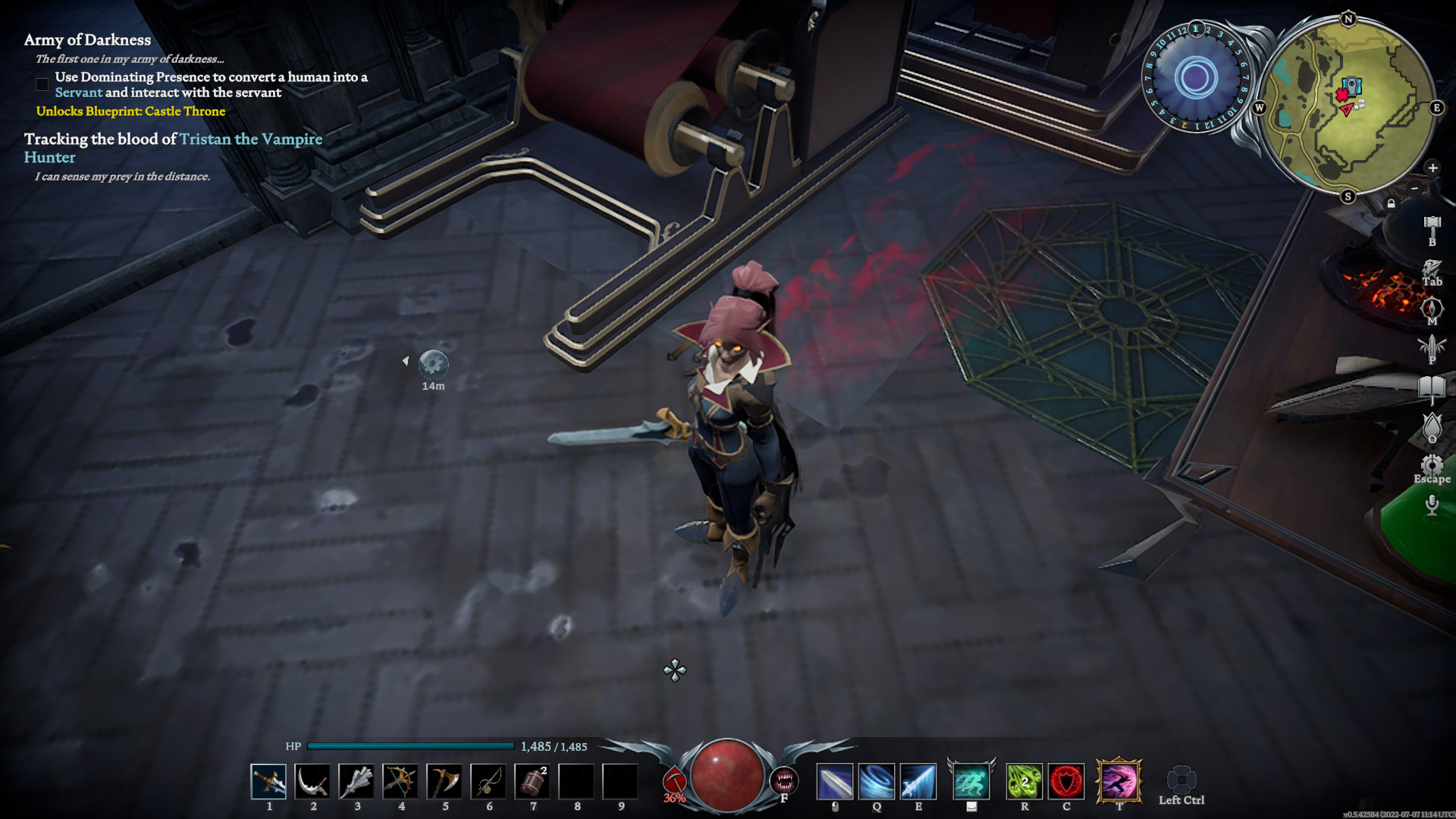 You all have until Friday, July 28th, at 1:00 p.m. EDT to decide the kind of monstrosity I’ll be making as we walk the world of Chimeraland. We’ll see how this all shakes down, but I suspect that this is going to be a trip one way or the other.