Virtually every MMO contains dangerous places that are filled with other players or NPCs that will attack characters on site, and many also feature destructible terrain or objects that must be destroyed. With all that smashing, crashing, and bashing, it’s clear that the mechanics employed by our favourite genre must be as diverse as the array of titles that comprise the big bad world of MMOs.

I started my MMO journey in much the same way many players did, testing out the traditional combat offered in the classic MMORPG. Tank, DPS, and healer systems were the first I was exposed to, and standing still to cast was totally normal if more than a little bit frustrating. I really enjoy newer action combat mechanics that reiterate on the traditional MMO combat experience to make it that much more involved and intuitive. In this edition of MMO Mechanics, I’ll talk about some of my favourite action combat MMOs, providing a little bit of insight into why each one made my mechanical roundup. 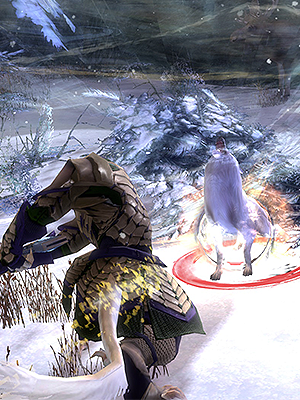 I couldn’t write this article without mentioning my MMO pet Guild Wars 2. I’ve played a handful of other action-combat MMOs, but I find the combat mechanics in this game to be particularly innovative. I really enjoy the fluid use of movement casting and evasion: I was frequently frustrated in World of Warcraft when I had to break my casting to avoid AOEs, particularly back in ICC during the Lich King fight, but ArenaNet has successfully eliminated this issue.

Bundles are a fantastic addition to each zone that are interactive location-based objects that can usually be weaponised to help make combat much more unique, especially since some bundles are weapons that your chosen profession may not naturally have access to. These objects replace your currently equipped weapons-related skills in the same way equipping a different weapon type would, which most definitely refreshes the combat mechanics. On-the-fly switching between weapon sets is deeply encouraged by both this access to different skills and the benefits gleaned by doing so: Some runes and specialisation choices actively reward the player for switching weapon set mid-combat.

Guild Wars 2 also departs from the “holy trinity” of DPS, tank, and healer without losing the distinction between professions. Professions’ combat styles are divided into three types — Soldiers, Adventurers, and Scholars — defined by the armour weight that they can use and how they should approach combat. Soldiers, as the name suggests, march on into combat on the front line and don heavy armour. Adventurer professions are the flexible midfielders who don medium armour, and the Scholars are a little softer in Light armour and take on a ranged backline role. With grouped professions like these rather than professions shoehorned into a more traditional mould, players can adapt to the combat at hand much more readily, which encourages the exploration of more content. 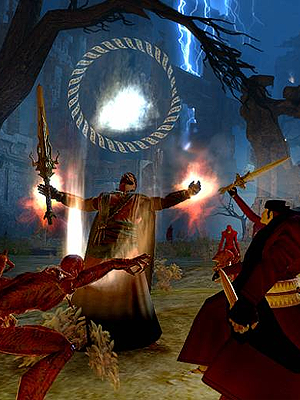 I adore how targeting works in Age of Conan: Slashing and hacking my way through opponents in strategic combinations for that all-important speed or extra damage keeps my attention firmly on the fray at hand. The Real Combat System makes the in-the-moment decisions all the more important, especially since each enemy is broken down into targetable areas. Items don’t play as strong a part in determining character beefiness as they might in more traditional combat systems, making the swift analysis of each encounter all the more vital. Players cannot rely on the best gear to carry weak application of tactics in tougher combats, especially when gelling those tactics with other players. This system forces combat to leap away from its bland algorithms and stats, putting the player in the hot seat for blow-by-blow engagement.

Battlekeeps and towers are great focal points for guild-based PvP in the Border Kingdoms, and combat is spiced up considerably by the involvement of mounts. Any game that includes killer rhino mounts is fabulous in my book! Make no mistake about it: Age of Conan is positively vicious in its combat, much to my delight. Mounts can trample opponents into the ground and hurtle your character at intense speeds towards a foe, spear ready to pierce straight through the target. The notion of gritty battle never leaves in this MMO, which is why it makes my list. Blood spatters, beheadings, and general brutality are definite themes, just as they should be for such a brutal IP. 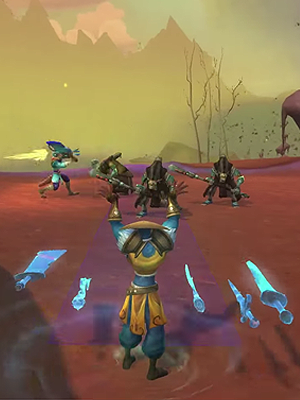 I just adore systems that ditch the auto-attack monotony and really place the pressure to secure success back on the players. I remember reading about WildStar before its release and finding the proposed mechanics quite exciting, and although I don’t find it to be as groundbreaking as its beta advertising had hinted, I have been generally impressed with the game’s version of action combat. Agency over the character’s success is at the core of the WildStar combat system since some content is easier for those who have honed their reactions. A persistent sense of danger permeates the MMO’s combat mechanics, and players will definitely die more than a few times as they get to grips with the system and specific timings that are intrinsic to WildStar.

Telegraphing is not new, but I feel that the game uses them very effectively in that a player can always find an escape route through the incoming attack, know when to stall for an AOE heal, and know exactly where each personal attack will fall. Each type has a unique colour for easy distinction in the middle of battle, and different types of abilities are shown by the direction of a moving line inside the telegraphs. I haven’t yet played an MMO with such a clear telegraphing system to guide the snap decisions required in action combat.

The moving bar is very helpful: Usually, telegraphing runs the risk of reducing the combat field to a boring “don’t stand in the red stuff” deal, but the bar means players pay more attention to the finer details. Instead of simply immediately avoiding or dashing away from the bad stuff, players can make an informed strategic decision on how or when to act because the timing is made so clear. I know this split opinions as many people find it to be too much handholding, but I find it strategically interesting.

The MMOs I have selected that highlight my favourite aspects of action combat are worlds apart from each other in terms of overall mechanics and feel. There overarching trend seems to be that each game has done its best to make combat more compelling than can be in usual MMOs in which players can be guilty of button spamming, relying on auto-attacks, or preventing fluid movement during combat. I don’t particularly enjoy bland combat and tend to pick other options when levelling such as gathering, fetching, or travelling quests. With clever action combat mechanics, I don’t shy away from bopping things around the head because it doesn’t get so stale. I don’t know about you, but I would never stand still while a crazy beast was attacking me, so why should my badass hero character? Diving, dodging, and planning my next move in the moment keeps my head in the game.