Let’s go ahead and get this out of the way: Tower of Fantasy, the new shared world RPG from publisher Level Infinite and developer Hotta, is effectively what would happen if Genshin Impact put on a Phantasy Star Online 2 costume. That summary is both reductive and accurate in a lot of ways, but it’s really hard not to draw the comparison, particularly when the DNA between the two titles is almost inextricably linked. They both share some UI elements in a few ways, they of course share the same gacha monetization model, and more importantly, they’re both made with a great deal of care.

The comparison to TOF and Genshin is pretty hard to break up during the opening segment, as you initially choose either a male or female main character and play through the experience of an ambush. From there, you apparently have enough of your memory wiped to forget what was going on, help out a nearby small town, and kind of go through the motions of following some breadcrumbs interspersed with some open-world exploration. 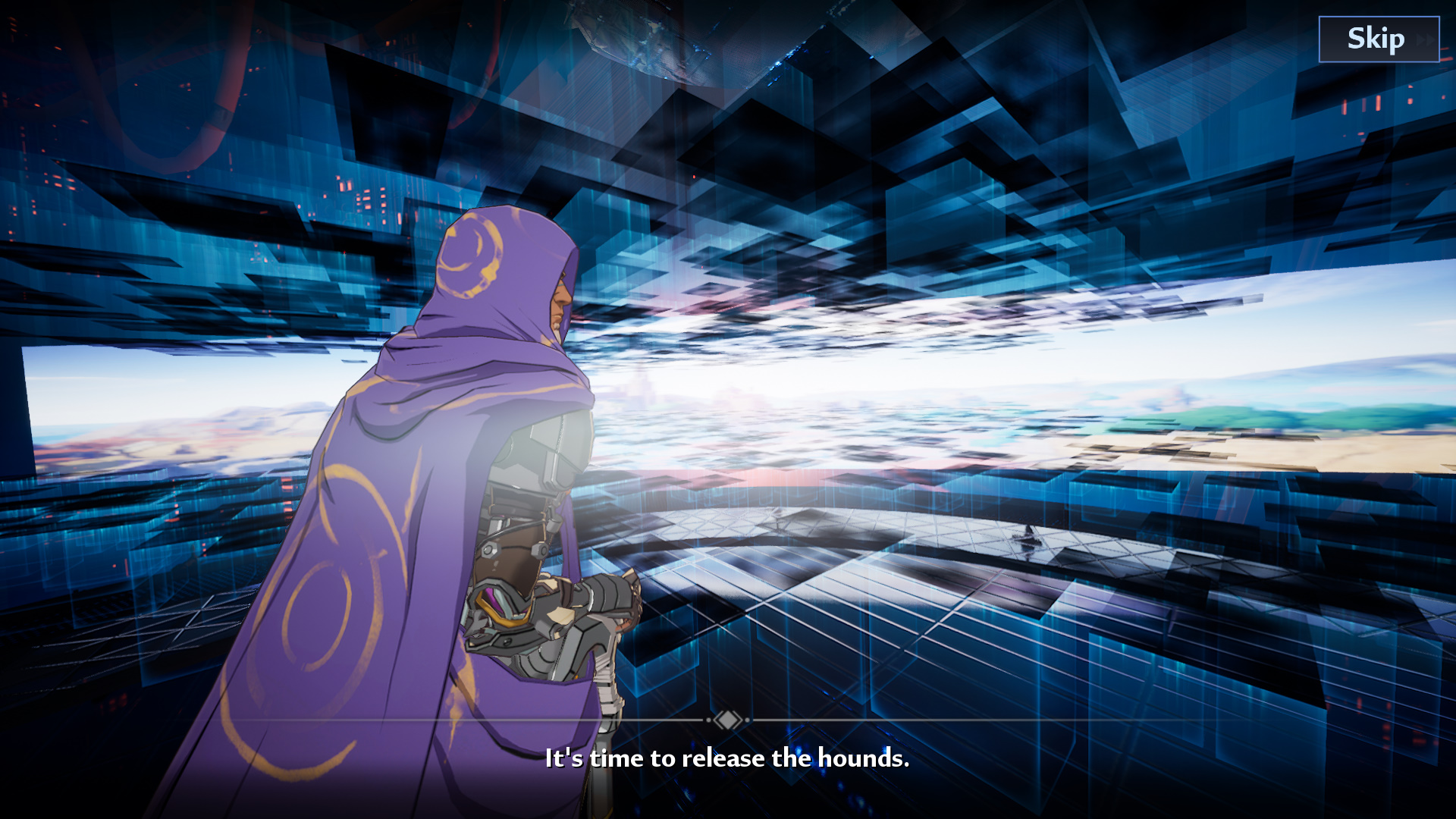 The narrative here is just enough to make me remember names and events, but not enough that I feel like I need to elaborate on it further; at the end of the day, your character is meant to stop some villainous organization from doing some subterfuge against the ruling class of Hykros, a city in the clouds. It’s anime tripe, but at least it’s cooked well.

Where the story is entertaining enough, the combat is the big flavor that kept me coming back, and it’s also where TOF strays from its major contemporaries. While Genshin forces me to assemble the Waifu Avengers in order to deal with threats, here I was able to keep my primary character active and instead swap between three different weapons on the fly. Once more, elemental interplay is a factor in combat, but through the 20-odd levels I’ve climbed so far, it’s mostly been a way to kill enemies a bit quicker rather than what feels like a hard requirement. That, of course, could change in higher levels, but so far I’ve been getting the job done.

The other – and in my opinion bigger – feature of combat is how the player enters a Phantasia state whenever he times a dodge maneuver correctly. This sends up a bubble around my character that slows down time for enemies and keeps time regularly ticking for me, meaning I was able to peel off a lot more attacks in a very short amount of time. The timing for when to make these dodges kind of feels inconsistent, as if the window to pull off the move is a bit too wide, but that, combined with taking advantage of elemental weaknesses and using different weapons, makes fights a good time. 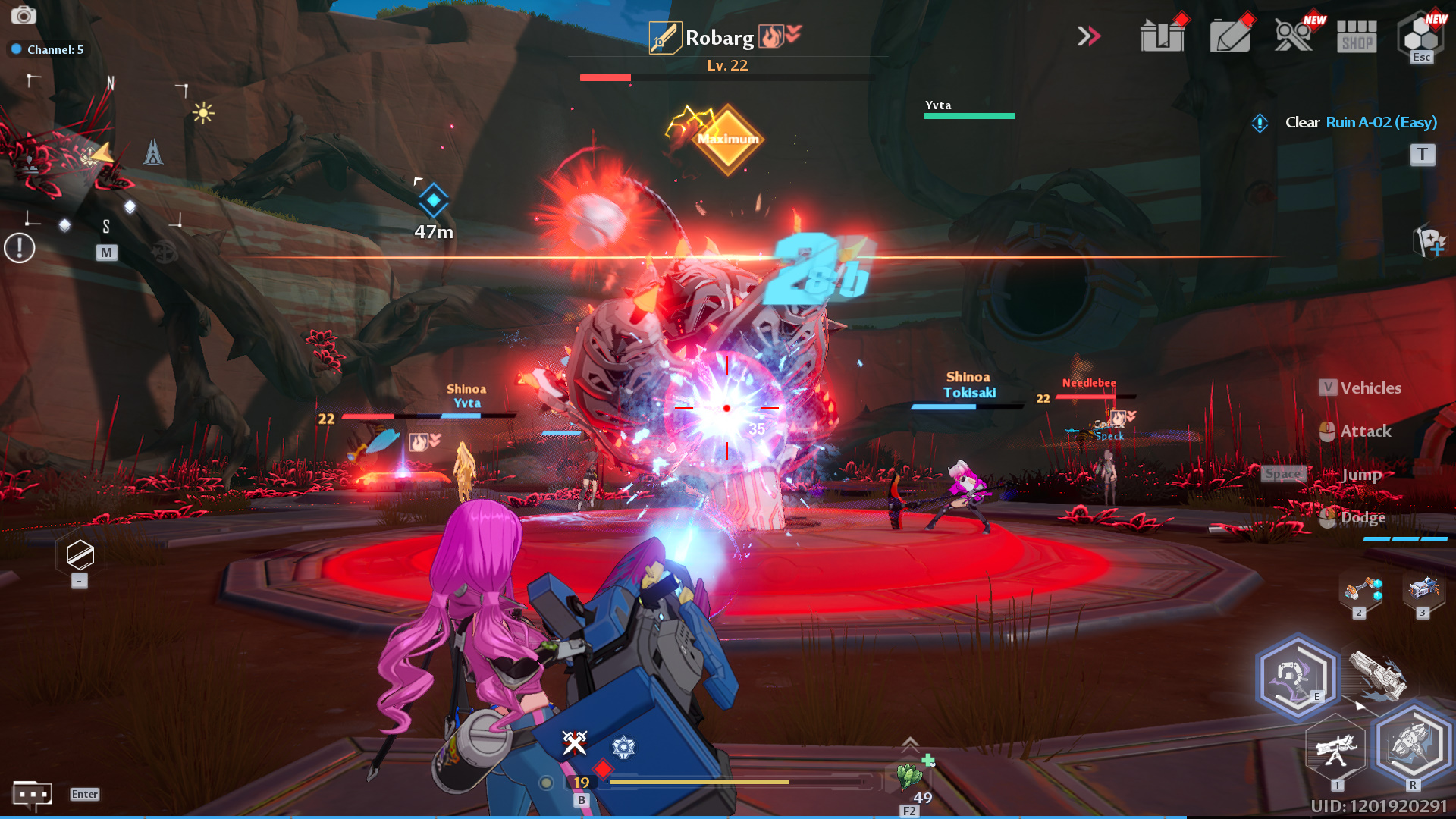 This does get even more fun with others, though the multiplayer experiences have been sadly sparse for me thus far. I’ve run into some random people running around the open world plenty of times (especially at Hykros), but the only time I’ve actually played with others was when I joined in an open world boss fight and hopped into a dungeon run. In both cases the idea of having trinity roles seemed to be non-existent, with encounters feeling less like party cohesion and more like a Guild Wars 2-style special effects explosion-fest, but I still enjoyed being in the mix.

On the subject of weapons, that kind of leads into the gacha element of the game. Just as in Genshin, there are pulls you can take of a big splashy slot machine-like animation to either get weapons, upgrade materials, or in a few rare cases a new character to the roster. For me personally, these character unlocks are interesting primarily because I get to use their weapons without being forced to use whatever nonsense anime trope puppet the weapon arrived with: If I get an edgy psycho boy with a bow, I can just take his bow and stuff him into a box where he stays blessedly out of sight and out of mind.

That’s not to suggest that the added characters are entirely useless. If you want to, you can take on their personalities and operate them as Simulacra, effectively replacing your main character with the chosen roster member. Doing so does mean you get some distinct attacks for the weapons they arrive with, but this feels much less like the hard requirement for survival like it is in GI and more like selecting a desired Warframe, and to extend that analogy even further, I’ve been feeling plenty powerful with TOF’s version of Excalibur. 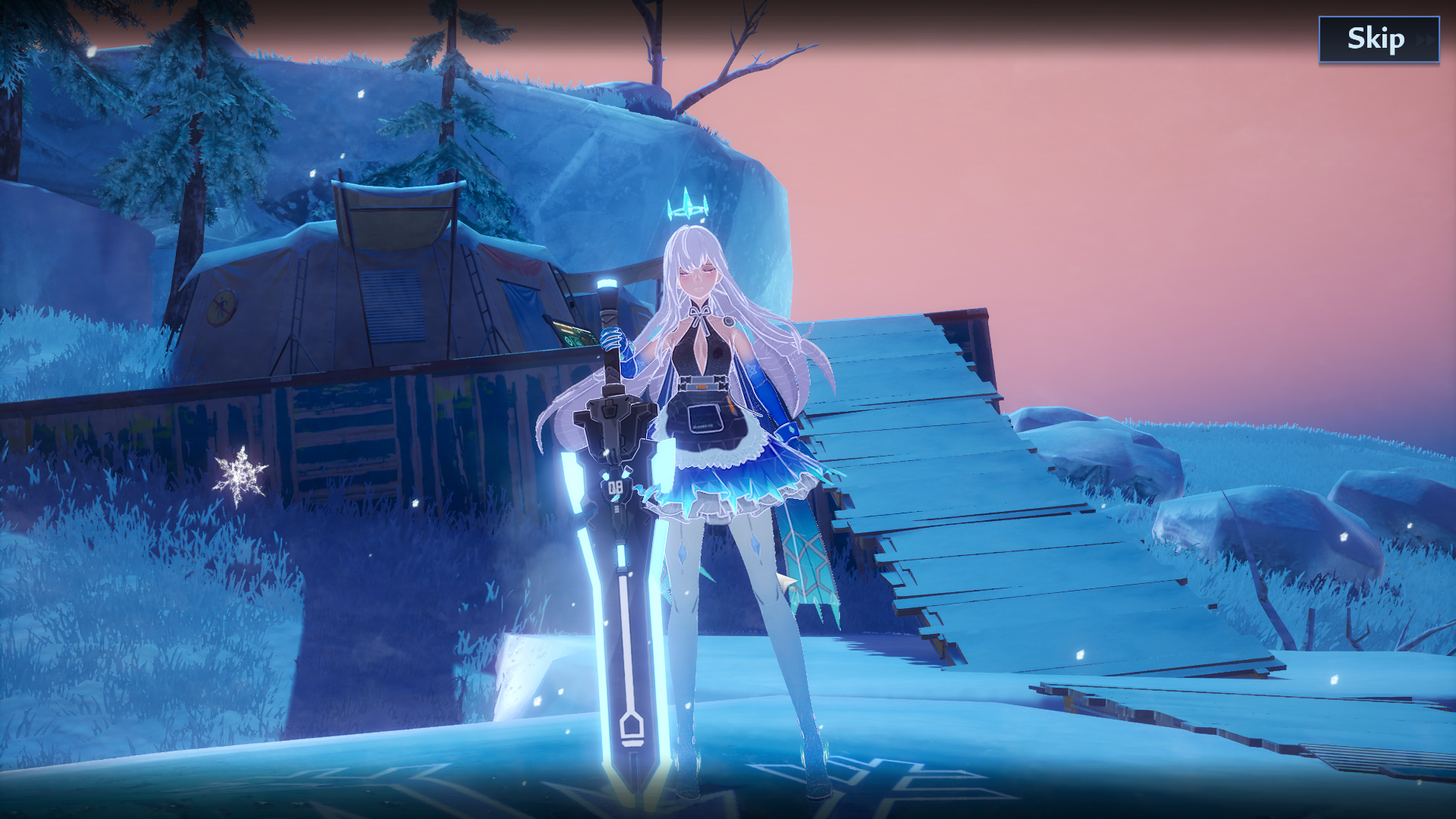 Much of this sensation of character improvement is linked to the many advancement systems that TOF has to offer. There are weapon upgrades and enhancements to chase for, there are buff-granting Matrices that can be slotted to weapons that confer bonuses (even more if they’re of the same set), the suppressors that guard you from some form of dangerous radiation can be upgraded for more stat boosts, and Relics – a series of super weapons that get unlocked over the course of play – can be upgraded. There are a lot of systems in place that kind of keep the whole thing moving along.

Of course, the process of upgrading all of these things gets resource-intensive, requiring a wide number of raw materials either gathered through questing, harvested from the world, or melted down from repeated weapon types. Many of the more rare materials can be gotten from a couple of different in-game shops, but to this point TOF has been spectacularly generous with the currencies and the boxes that let you choose what material you need. In addition, the currencies for gacha pulls are fairly readily dished out as well.

Granted, getting to these freebies is a bit of a chore, requiring you to navigate the wide litany of UI elements that are the sad part and parcel of the mobile gaming experience, but even wading through all of those, I’ve not felt the need to spend a cent. The more cynical side of me, though, is kind of expecting that other shoe to drop and the well to dry up at any moment. So far though, I’ve gotten to the mid-20s in level and haven’t felt nerfed or hamstrung, and I’ve been able to keep all of my kit up to date. 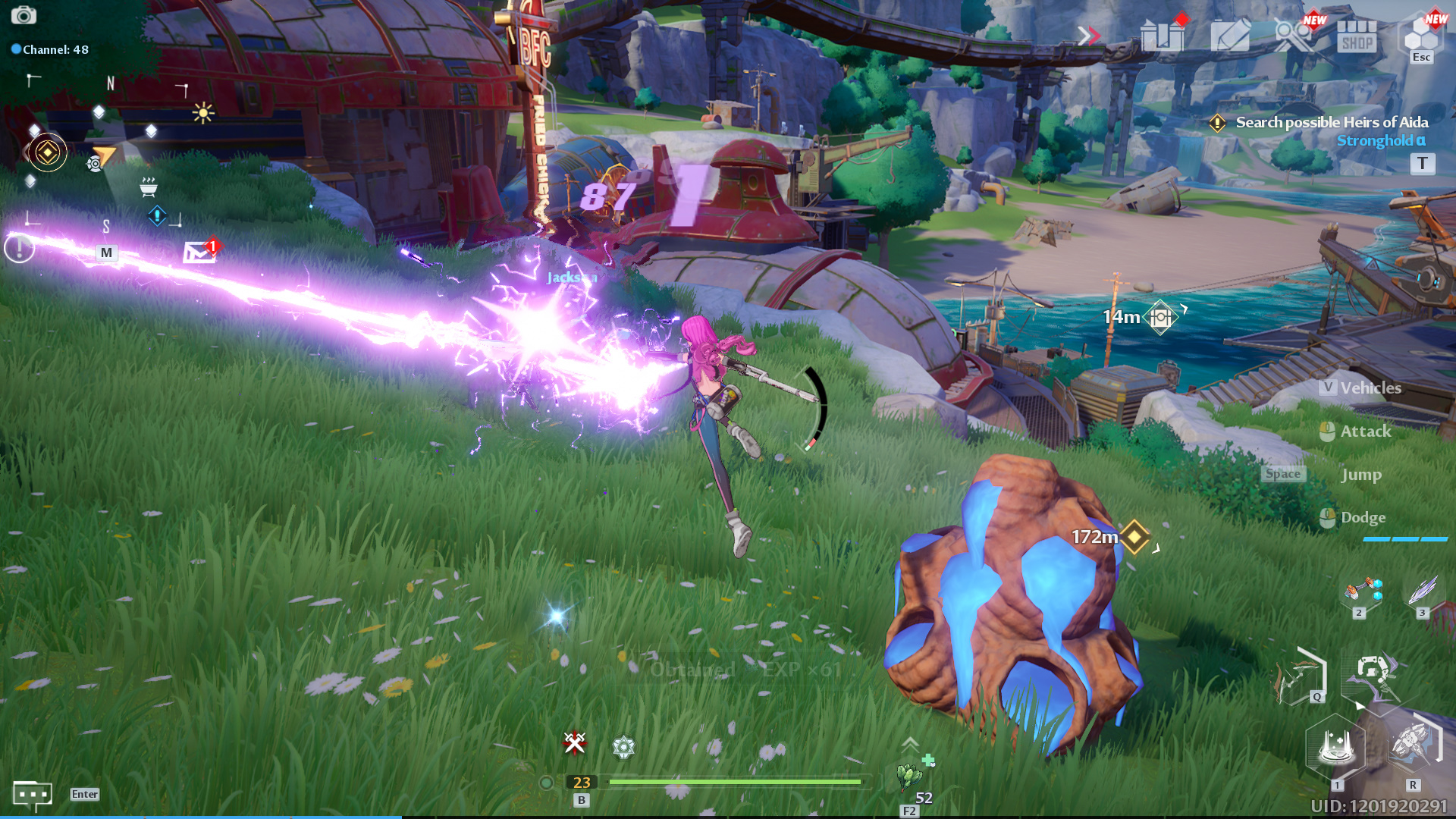 Obviously, the myriad good experiences and all of the fun I’ve been having in TOF will not change many minds. If you’re already invested in Genshin’s kind of multiplayer RPG, there’s nothing here to talk you away. If you shun gacha monetization out of hand, then that’s understandable. If you hate anime RPGs, this one will absolutely not win you over.

Still, for someone like me who kind of fell off the GI wagon, has been finding the story enjoyable enough, and has been having a good time with fighting and progression, TOF has been surprisingly enjoyable. This game is, in the purest sense, pretty good so far.