One of the main things that keeps me coming back to New World despite its many rough edges is the fact it’s one of the few MMOs on the market with a genuinely challenging open world solo experience.

But to survive the wilds of Aeternum, you’ll need the right equipment, as in this game your character’s build is largely determined by their weapons and armour. Over the past year I’ve tried every type of both at least a little, and now I’m here to give you the rundown on the pros and cons of them all from a PvE soloist’s perspective. There’s a lot to say, so this guide will be split over two columns. Today, we’ll focus on ranged physical and melee weapons.

Being able to fight from range is always a strong advantage in solo play, and any of New World‘s ranged weapons can be an asset. Adopting mechanics more akin to that of a shooter like Destiny or Warframe than anything in the average MMORPG, they offer devastating damage from a distance.

However, there’s a price to be paid for this. Ranged weapons can’t block, and the stagger from enemy attacks will throw off your aim, so picking up a bow or musket will leave you extremely vulnerable to enemies who can close the gap on you. Bow has strong mobility tools for kiting, and musket has traps to slow their advance, but sooner or later something’s going to catch up to you, and you’re gonna have a bad time.

For this reason, despite their power, I would not recommend relying purely on physical ranged weapons when soloing in New World. It’s best to have a melee or magical weapon as your secondary, even if only as an emergency back-up.

Bow scales purely off dexterity, so you can really only pair it with other dex weapons if you don’t want to hamper your performance. Rapier and spear are both ideal choices. Sword and shield or hatchet can also work, as they have dex as secondary attributes. 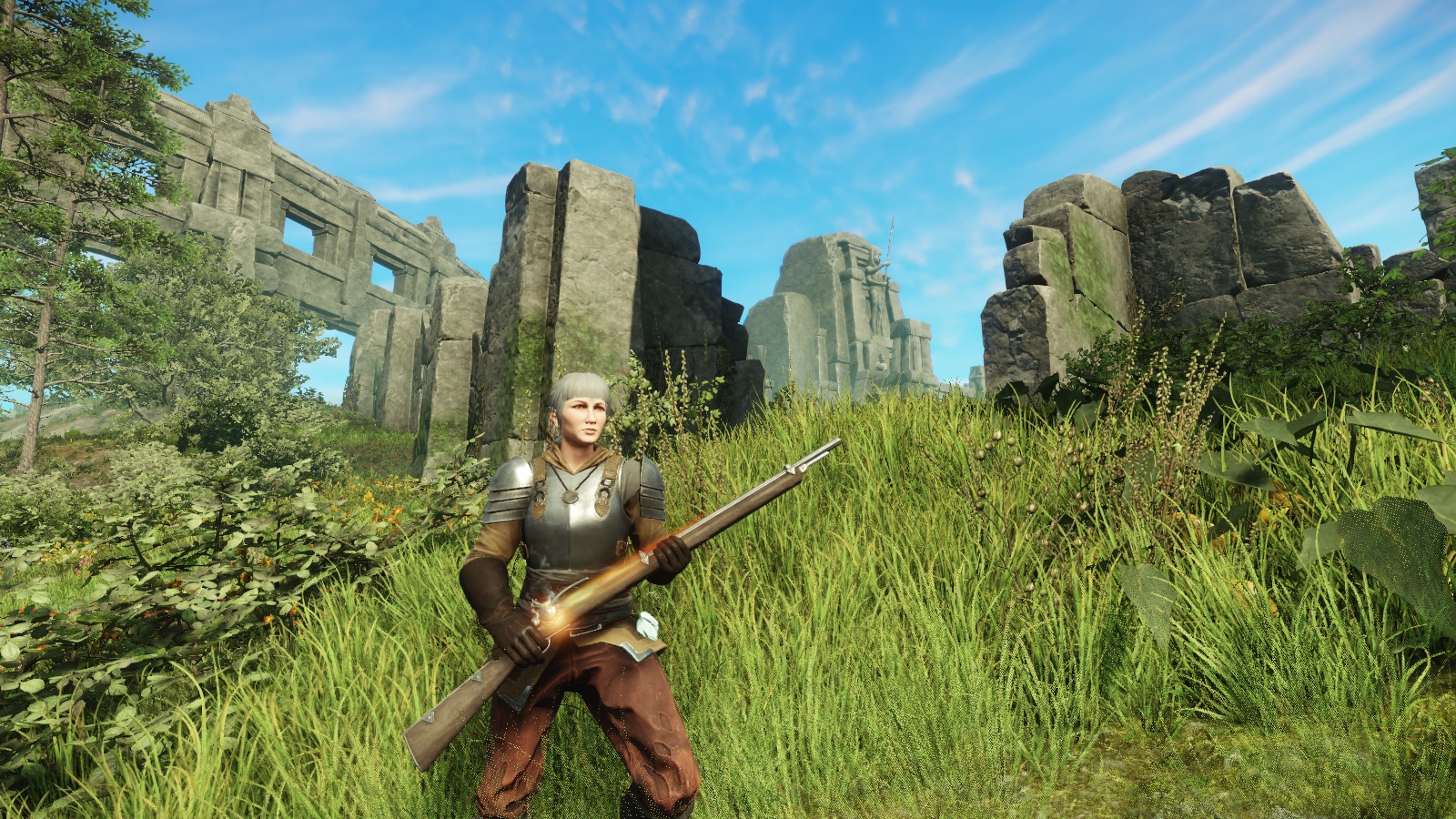 Musket scales primarily off dexterity as well, but it has intelligence as a secondary. Again, rapier is a perfect pairing, and the other options mentioned above can work as well, but intelligence also opens up most magic weapons as options. Prior to the release of the void gauntlet, my main used a musket and ice gauntlet build that worked well, the AoEs of the gauntlet complementing musket’s single-target focus.

There’s one ranged option I haven’t mentioned yet, and it’s the new kid on the block, blunderbuss. New World‘s equivalent to a shotgun, it’s not so vulnerable to melee attackers. It still can’t block, but its broad cone attack means you don’t need to worry about missing many shots, and running and gunning can be a good strategy.

Unfortunately, blunderbuss scales primarily off strength and secondarily off intelligence, so it’s a poor pairing for the other ranged weapons. An intelligence build with a musket is possible, but neither weapon will be at its maximum power. It’s best to pair blunderbuss with a strength weapon or use it as back-up to magic.

The great axe and war hammer both scale solely from strength. This somewhat limits their potential pairings with other weapons, especially if you don’t want to go double melee. Even blunderbuss is more of a mid-range option at best.

The great axe is a solid choice that boasts strong AoE damage and crowd control, excellent for turning the tables if you find yourself swarmed by mobs. The war hammer is one that I’ve not had much success with, mainly due to its extremely low attack speed. That said, I’ve always been the type to prefer light, speedy hits to slow, heavy strikes, so it might just be a personal preference thing. 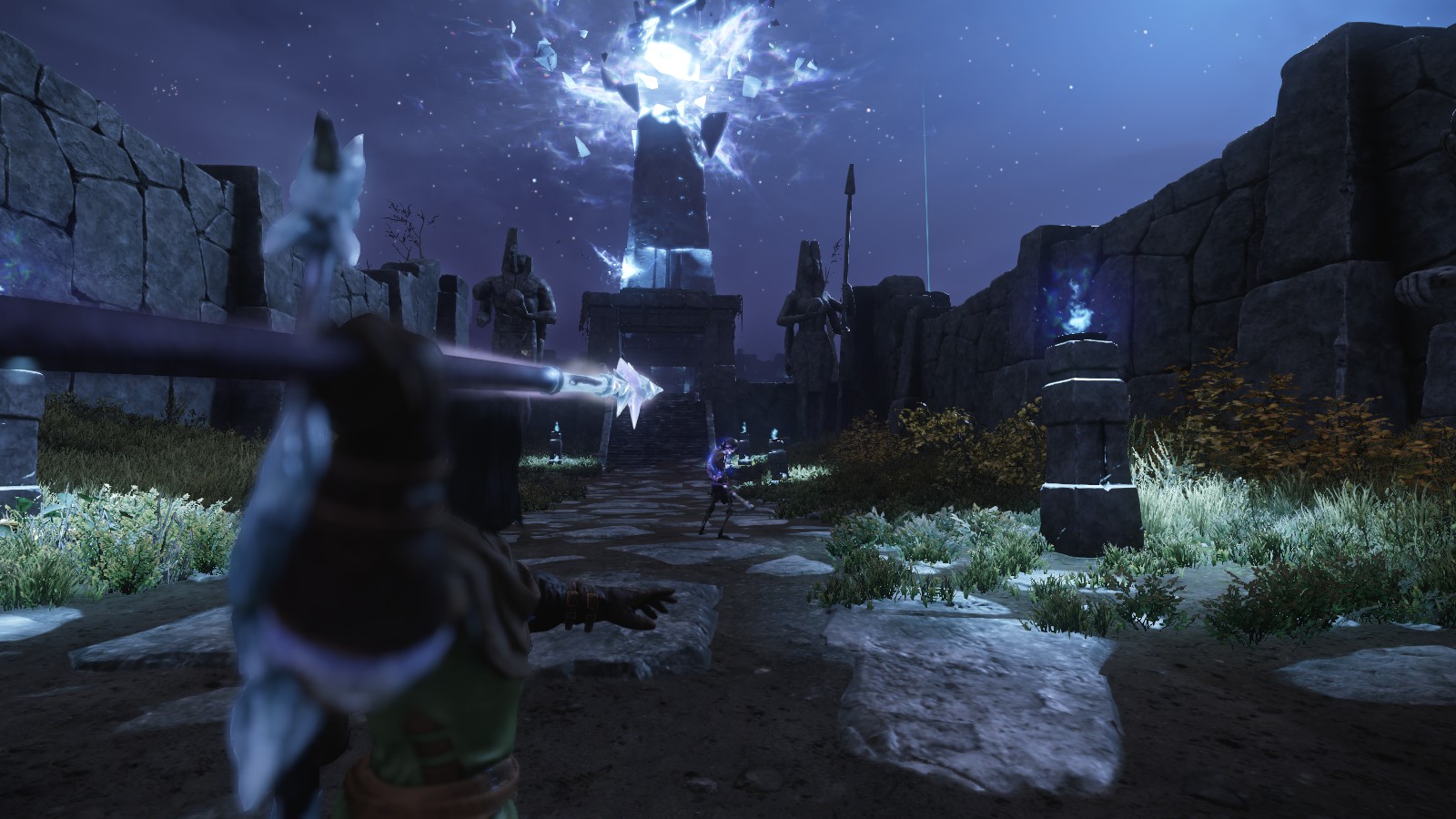 Rapier, as mentioned above, scales off dex first and int second, making it a versatile pairing with a wide variety of weapons, especially ranged ones. It’s potentially a very strong weapon, with good damage and some CC, but it is one of the more challenging weapons to play well, in my experience. Most of its abilities require careful aim or precise timing. If you can manage that, rapier is an excellent weapon, but honestly, I’ve struggled to maximize its potential.

Spear is the other dex primary melee choice, with strength as its secondary. I’ve been using it paired with a bow on my alt, and in my estimation, it’s one of the strongest solo weapons in the game. It boasts both a variety of crowd control abilities and powerful cooldown reduction passives that let you spam them almost constantly. Enemies end up being hit by so many stuns and knock-downs they can barely fight back.

Spear’s only weakness is that its attacks and abilities tend to have a very narrow area of effect, so if you find yourself facing multiple foes, it can be a bit of a struggle. But against a single-target it’s almost too strong.

That leaves hatchet and sword and shield as weapons that use strength primarily, and dexterity second. I still remember back in the pre-launch days when hatchet was so strong it was considered game-breaking. It’s one of the leading contributors to the controversial removal of stagger from player basic attacks.

Hatchet isn’t quite so OP these days, but it’s still one of the strongest solo weapons. It can be specced to double as a ranged weapon, which adds a lot of versatility and makes it a viable ranged back-up for pure strength weapons. Just be aware that speccing into the ranged option does prevent you from using the weapon to block.

Hatchet also has Berserk, an ability that could just be a soloist’s best friend. Initially a powerful damage buff, it can later be upgraded to heal you and make you immune to stagger. Berserk alone would be enough to make hatchet one of the game’s finest solo weapons, nevermind its other strengths. 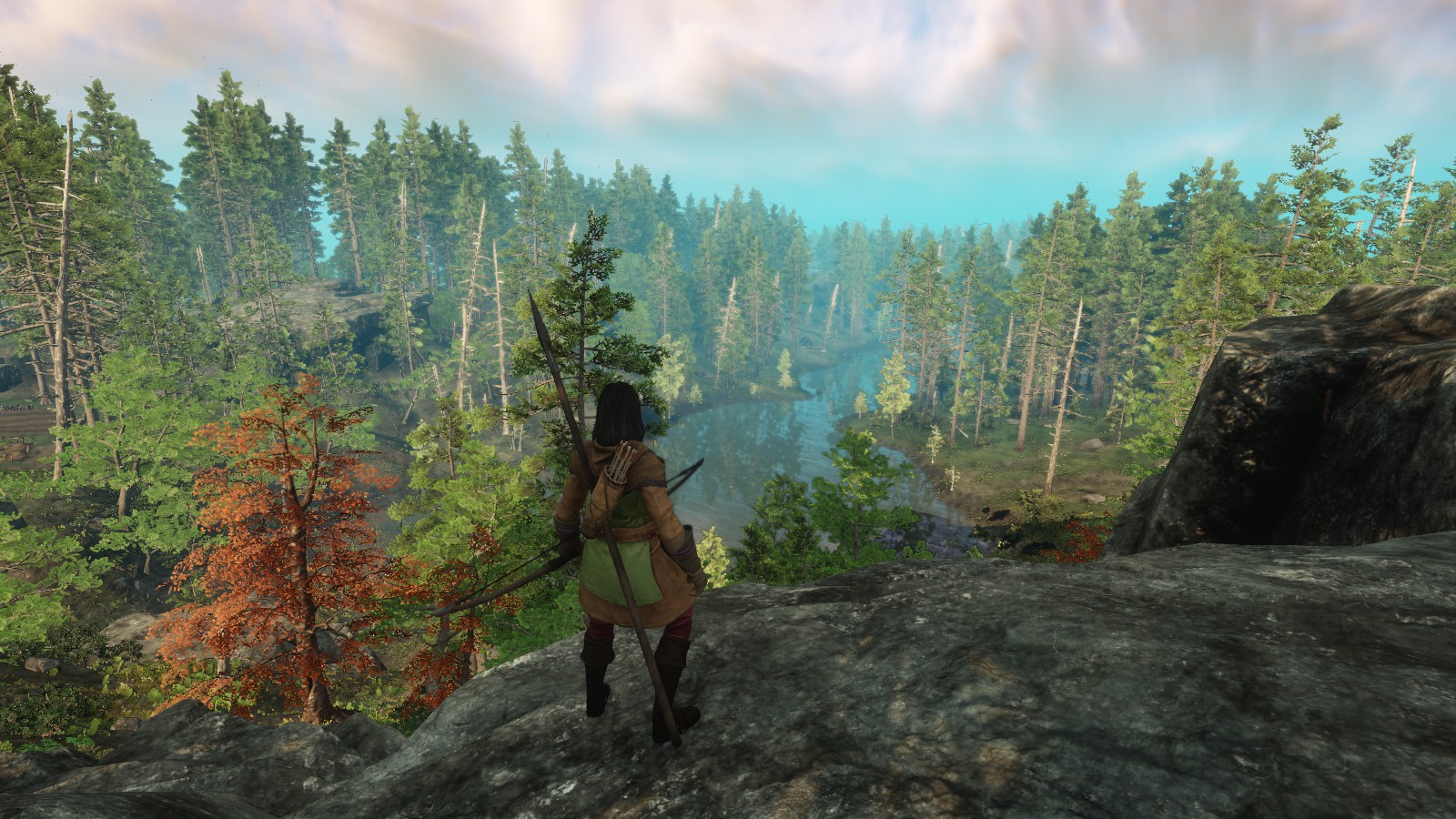 Between its versatility and raw power, hatchet is one of the few weapons in the game that could theoretically be used exclusively, without ever swapping weapons, without significantly compromising performance. If you don’t like the weapon swap mechanic, consider a hatchet build.

Meanwhile, sword and shield is less flashy than some of the other options, but it gets the job done. There’s a reason the devs chose it as the default starting weapon for new players. It’s easy to use, effective, and versatile. While other weapons may outclass it in specific areas, sword and board also doesn’t have much in the way of weaknesses. If you want a weapon that’s just generally good and easy to use, it’s a great choice.

That’s enough for today, but in a future column, I’ll analyze magical weapons as well as armor choices.