Windward is an oddly endearing little duck that escaped my wandering game eye prior to the moment developer Tasharen Entertainment dangled an early access key in MassivelyOP’s general vicinity. It’s not strictly an MMORPG, which you might have guessed given its presence in this column, but it shares enough of the genre’s DNA to both be worth mentioning on MOP and to please fans of said genre.

If I had to sum up Windward in a single pitch, it boils down to Sid Meier’s Pirates plus multiplayer minus those dance-with-the-governor’s-daughter minigames.

Windward bills itself as “an action-filled multiplayer sandbox game that puts you in control of a ship sailing the high seas of a large, procedurally-generated world.” You can fight pirates, complete quests, trade goods, or explore the map using the game’s top-down perspective, and of course there’s a lot of ship progression, component upgrades, phat lewt, and so on and so forth.

Upon loading the game client, I came upon a pleasingly presented menu and opted for an internet game rather than the single player or direct connect options preceding it. If you choose single player or choose to host a direct connect game with your friends, you’ll go through the world generation process, which entails several choices relating to map size and faction customization. My experience, on the other hand, consisted of logging into the Beginner – East Coast 1 server that typically resides near the top of the public server list and boasts between 30 and 40 players in Eastern prime time.

I picked the White Dragon faction to start, mostly because I liked the name and because the verbiage indicated a focus on trading and questing that agrees with my delicate carebear sensibilities. Faction choice doesn’t seem to make much of a difference in your day-to-day gameplay, though, at least from what I can tell over the first few hours. That said, different factions have different starting abilities and items (Sojourners get a dive suit that allows for looting wrecks, for example), so choose wisely.

Controls are solid and intuitive, with WASD moving your ship by default. Alternatively you can position your cursor over the spot of ocean you’d like to traverse and hold down the left mouse button. Spacebar drops your anchor, and you’ll see an MMO-style hotbar that fills with abilities as you earn them via the XP-based talent tree.

The tree is fairly diverse, you can put points in everything from combat abilities to ship maneuvering to diplomacy and trading bonuses, and there’s a handy (and pricey) respec option at the bottom.

Windward’s interface is a minimalist’s delight. It looks fantastic, and everything feels properly placed; I’ve spent next to no time hunting for functionality. Perhaps I did miss a tutorial, though, and if not, a basic one wouldn’t be a bad idea. I played for several sessions before I realized that right-clicking on various ships offers options ranging from bribery (pirates) to job offers (friendlies).

Gameplay can be broken down into questing, trading, and combat, and in true sandbox fashion, it’s completely up to the player how he or she chooses to spend time. In addition to the talent tree, progression involves money and lots of it, since surely you’ll want to upgrade your starter sloop to something that carries more guns, more cargo, and more potential for impressing newbs and intimidating frenemies. 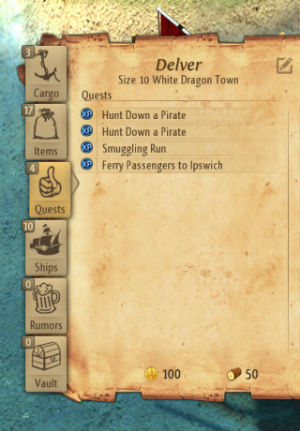 Trading is the best way I’ve found to make bank thus far, and it involves the same basic principles found in everything from EVE Online to Elite: buy low and sell high. Windward even helps you out with a “Rumor” tab located on each port town’s interface. Depending on the size of the town (which is affected by player activity such as trading and questing), you may get some helpful nuggets that say something like “Ipswitch is in dire need of cotton.” You can also quickly determine commodity demand by mousing over towns on the world map.

Questing is standard MMORPG fare. There’s a lot of ferry-X-to-Y or defend-the-town-from-NPC-pirate-ships. Despite how rudimentary it seems at first glance, there’s something strangely satisfying about logging into Windward for 20 minutes and completing a quest or two. I guess I’ll chalk that up to my Age of Sail obsession, the simple yet beautiful top-down presentation, and the top-notch soundtrack.

I’ve only dabbled in combat to this point, though I can say with certainty that circling around pirate ships with my Brigantine and my max-range talents is quite a lot of fun. At my level (22 talent points as of press time), combat is basically like turn-fighting in a flight sim. There’s no real skill involved other than picking and choosing my engagements. I only have two special abilities at the moment, chain shot and volley, so I just make sure to stay in front of or behind my enemies and pummel them with my side-mounted cannons before using my repair ability if necessary.

If you’re on a public server, you’ll occasionally see shout-outs for heroics, and I recommend you get in those early and often. Heroics are basically high-level instances in which several players band together to clear the map of any and all pirates. Even for a newb like me, they’re worthwhile in terms of loot and XP, plus it’s fun to watch accomplished players in badass ships mowing down pirates left and right.

PvP is available, too, primarily via hosted servers where the admins can choose to enable it globally at map creation. Alternatively, some servers may allow for faction-based conflict based around particular regions of the map. Players may also opt out of said conflict by flying their white flag.

Windward’s playerbase is a jolly bunch, at least on the newbie US shard. I’ve been gifted more high-level items than I know what to do with even though I’m on my anonymous definitely-not-a-game-journo account, and one chap named AccidentByBirth even gave me the aforementioned dive suit as well as the tools to customize the logo and the color of my sails, along with plenty of helpful advice. Thanks, man.

Ultimately, Windward looks nice and plays really nice, though there’s no trace of what I mockingly refer to as MMO story. There’s just a procedurally generated world, addictive mechanics, and other people. Unless you choose single-player, naturally!

Windward is that rare indie sandbox gem that does a bang-up job of appealing to almost everyone. Whether you’re a casual with limited time, a carebear who prefers exploration and trading and questing and atmospherics, or a combat-focused grinder with an insatiable desire for PvE and PvP, there’s plenty of high-quality entertainment here.