END_OF_DOCUMENT_TOKEN_TO_BE_REPLACED
One of the big additions with Final Fantasy XIV‘s patch 3.2 was tomestone gear with materia melding slots. This is something very new for the game; up until now, materia melding was something that existed entirely outside of the high-end gear. You melded materia on crafted gear for specific purposes, but you didn’t usually have access to them at the topmost levels. Now that materia actually has a use again, and you have plenty of encouragement to do Void Ark at least once a week because you do not want to spend the money on those Savage Aim Vs.

Honestly, though, the addition of materia melding changes a lot about how the uppermost gearing works, even with tomestones. Materia becomes far more relevant and useful, and it also makes gearing more expensive in every sense of the word. I don’t need to tell you that I have thoughts about all of this, and I think it’s the sort of thing that’s going to have a big impact on the community over time. So let’s talk about these melds, whether or not they’re worth it, and what the ups and downs are.

Let’s start by establishing the basics for those who just know that they’ve got slots on tomestone gear. A full set of gear from Midas or from Lore tomestones will offer you 18 slots, one each for accessories (right side pieces and the belt) and two each for main armor pieces and weapons. (The exception are Gladiators, who have one slot on their weapons and one slot on their shields, but the numbers are the same.) These slots can be melded with secondary stats, and overmelding is not possible, thus freeing you from the permanent hell of crafting and gathering gear in 2.0.

For Lore gear, when the item is upgraded you will lose all of the melds already in your gear.

Aside from the existing ways to get materia, you can also get Grade IV materia as an optional reward from Amalj’aa, Sylph, Sahagin, and Kobold beast tribe quests at the highest rank. You also get a weekly turn-in item from Void Ark to get a free piece of Grade V materia. The weekly item is automatically awarded, same as the Mhachi Farthing. All melding requires a level 60 crafter of the appropriate discipline.

Stat-wise, I ran a quick bit of numbers with Determination and the upgraded Ninja set. The full Scouting set sports about 363 Determination; fully melded with Determination materia, you add 216 additional Determination, or about 60% more of the stat. You should probably not do this as Determination is not great for Ninja, but the point here was stat values and how much you’re adding if you focus in on one stat. I am not diving into the hornet’s nest of formulae which lies in damage calculation.

One of the things that you have to consider when melding is that all of your melds are going away. It’s going to take a while, definitely – if you’re not doing Savage, you’re not upgrading until patch 3.3, and I wouldn’t expect that until June at least – but the acquisition of Grade V materia is still slow, expensive, or both. Thus, you probably don’t want to fill up your 220/230 gear with Grade V pieces unless you somehow have them raining from the sky. The stat jump is appreciable, but there is nothing in the game that actually requires that stat jump at this time.

Grade IV materia should serve your purposes quite nicely for the lower gear, which is helped by the fact that you get a fair bit of that just going through the main scenario and can pick up several more pieces on a daily basis. It also provides a significant boost even beyond the natural enhancement provided by having gear far above the “recommended” gear levels.

If you can’t meld everything immediately, however, it’s important to note that the melds are pretty strictly a bonus. It’s going to become far more prevalent as 230 gear becomes more common on players, but for most of the world you only “need” unenhanced Esoterics gear to clear everything. Other bonuses are just that: bonuses. Boons. Benefits. You do not need to be fully melded to clear out dungeons, and the odds are high that you will not ever need to be fully melded to do so. 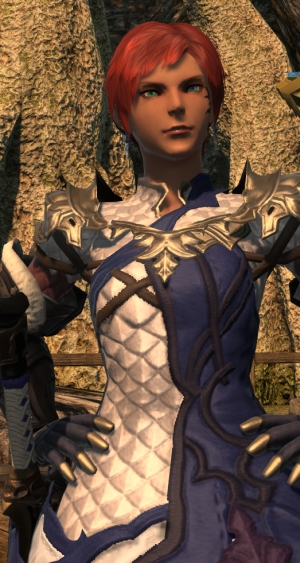 I’m of two minds about the addition of this system. On the one hand, this is additional customization for your gear and character in a game that sorely needs it. You get to make a choice if you want to have your Dark Knight focus on Parry or Determination, for example, making decisions about damage or defense that don’t necessarily require you to wear gear that makes you more squishy. Healers can prioritize different things based on individual preferences, with healers who aren’t comfortable stance dancing get more out of Determination, healers who do stance dance using Accuracy, or both splitting the difference with Spell Speed.

However… when I say that there’s “customization,” it’s not particularly deep. At most, we’re talking about five stats to weigh for tanks (Parry, Determination, Accuracy, Critical Hit, Skill Speed), and there’s a pretty clear set of winners even there. Accuracy in particular is going to be largely irrelevant except for healers, since DoW gear already usually winds up with more than enough Accuracy to handle non-Savage content. Realistically, your job of choice will have one or two stats to choose between… and you will want to choose, since as mentioned above, the state bonus is only sizable if you devote your gear to one particular stat.

Despite all of that, though, I come back around to that first point, that this is customization. It’s not tremendously deep, and I don’t think for a minute that there won’t be a rather unambiguous answer about what you should be melding in any given slot for maximum efficiency. But so long as you understand the basics of your job, it’s difficult to make outright wrong choices so much as sub-optimal choices, and it’s far better to be, say, a PLD with all Skill Speed melds than one with maximized Intelligence via bonus points.

Like almost everything in the game, it’s an experiment and a test for what can be done moving forward. It’s a new way of handling a specific sort of gameplay and addressing a sizable gap in player options and the utility of materia. It’s not yet refined very well, but it at least has an eye toward improvement over time, and it’s the sort of thing that may very well fit into the next expansion comfortably if it’s designed to be present from the start.

Feedback, as always, is welcome in the comments below or via mail to eliot@massivelyop.com. Next time around, I want to talk about the development plans that have fallen silent and whether or not we’re likely to ever see them happen.

I’ve never been a fan of enchantments/runes/gems/materia/slot gear/etc. Specifically because it’s extra money and effort (that’s usually required) that all gets lost when you upgrade. I hate the idea of working hard for amazing gear… and then having to dump money into it anyway. If I wanted to do that I’d just buy crafted gear!

So I just stuffed whatever III/IVs I had applicable to my job in there, and I’m hoarding/selling the Vs. I’m basically ignoring it as much as possible.

I have honestly forgotten that Materia melds were possible in this patch, that’s how far removed I am mentally from the addition. I have never cleared a Savage-level anything and am perfectly cool with that. I’m familiar with my personal skill ceiling, and Materia does nothing to improve the content I do play.
Still, though, I have a bunch of IV’s and V’s in Retainer storage…just incase they do something genuinely revolutionary with Materia.

More than any other aspect of FFXIV, the Materia system makes me pine for what could have been. Materia could have offered much more customization than just being able to choose what stats you want (aka: the most boring form of customization for the type of MMO FFXIV is). In my perfect world, FFXIV ditches Classes in favor of only having Jobs, and Materia is used to further customize those Jobs. I have more thoughts on the subject besides that one, simple sentence. But this is supposed to just be a comment.
I understand that there are a good handful of reasons why FFXIV isn’t structured that way. It’s just that the Materia system, specifically, is at the crossroads of my disappointments, so mention of it always brings up a lot of thoughts.

I didn’t find the materia very interesting in FFXIV… and now it’s a mandatory “enchant” on everything? Blegh.
I would have liked to see something more in line with FFVII.

We all know what’s going to happen if you bring the “wrong” materias on your gear anyway, it’s not like you’ll have any choice when joining groups.
Man that model really is a way to push for even more grind in MMOs, it would be better as account bound buffs that you have to choose depending on the situation. Could be a way to bring back elements in FF, in this case.

Mostly because they used the most boring aspect of Materia in FFVII: Stat increase. I wish they would have given it a bit more flavour like different stats, different attack potential (Elemental Resists/Attacks, mini regen/lifesteal, etc etc etc) or just something to add an extra bit of flavour to the game. I understand that if you choose to make some of the attacks or skills in the Materia too powerful, you still pidgeonhole someone into getting that one only, but the game wouldn’t be hurt by a bit of diversity in its forms of equipment.

Just kinda bummed out they went stats only. I was hoping for more than being able to socket all armor/weapons/accessories when they said they would “revolutionize” the Materia system.