The season to end all seasons has come and gone. The Secret World’s Samhain has faded back into the fog, and it will be another year before it returns. So how was the event that everyone looks forward to throughout the year? I have to say Samhain 2016 broke the mold — just not in the way I was hoping. No, the mold that broke was Funcom’s streak of topping itself every year with better and better Halloween missions. It was bound to happen. Just look at last year’s The Seven Silences; that set the bar pretty darn high. The whole year I have found it hard to believe that devs could possibly out-do that phenomenal mission, even though I still believed they could because each year, they have pulled it off. It set a precedent that was impossible to keep up indefinitely. Sometime, it had to stop.

Sadly, this is that year.

To say that 2016’s event is a disappointment to many is an understatement. The teases and lead-up that had players speculating on clues and puzzling things out were pretty cool. Then the event itself started, and the unhappiness spilled forth on the forums. What’s The Rider Cometh got — or not got — that had folks in such a huff?  Here’s the lowdown on the event.

After so many years of increasingly more amazing missions, where did Samhain 2016 go wrong? It’s more the lack of a mission. Like that old catchphrase, “Where’s the beef?” this year’s Halloween event had folks asking, “Where’s the story?” Past years had missions that were woven all through the characters, the backstory, and the lore of the world. This year’s didn’t. As such, the event felt very disconnected from TSW, whereas the others have felt more integral. This year the only real mission was a single side one you picked up in Agartha that rewarded the 2016 event bag. Quell the Curse had no cutscenes and no story to it. That’s where the problem was.

As an event, The Rider Cometh itself was not terrible. People were not up in arms because the devs tried something new. A big community-wide investigation is actually great. It’s the timing. Any other time of the year, this would have been more awesome. In fact, if it were just put in randomly in a different month, I believe the players would have praised Funcom for the additional content. Unfortunately, the event has rankled folks mainly because it was missing the pinnacle ingredient that everyone looks forward to all year, the thing that brings folks back for Samhain: the story. You don’t mess with our Halloween story! 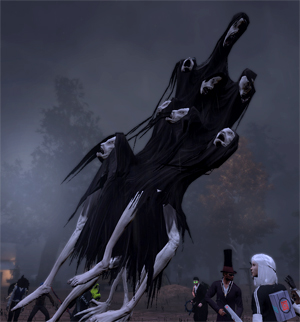 How much do folks anticipate the Halloween story? When nothing new was introduced during Krampusnacht last year (a real disappointment for sure), folks mostly shrugged it off because there was next Halloween to look forward to. We all know that’s when the best story comes! We forgave lack of content in anticipation of content 10 months away because we knew it would be worth it. Instead, we got a world boss raid.

Don’t get me wrong: The boss raid is not a totally bad/hated event. Plenty of other times of the year (anniversary celebration, golden weeks, and even Krampusnacht that has the summoning and dispatching of Hel), we have to kill world bosses for events. That’s OK… for those times. Just not for Halloween. Samhain has always been all about showcasing and experiencing the most amazing aspects of TSW: the ambiance and story. Lagfest world bosses are not the heralded ambiance. And we already know there was not much of a story. Nothing about those fights was a personal experience like you get when working through a deep story mission, and I was so looking forward to personally experiencing an amazing story. Sadly, there was nothing that really delved deeper into the world. I couldn’t even participate by discovering a part of the puzzle; the clues themselves dropped so rarely that many players never even got one.

I can’t even tell you how much I personally hyped up the holiday to folks as the best time to try or come back to the game. And I feel a bit guilty about it because I feel as if I misled them. At least the new folks could immerse themselves in all the previous Samhain missions to get the awesome experience.

Another part of the big disappointment has to do with the let down of no Little Springs High. It may have only been one year, but you can’t deny that Funcom set a bit of a precedent when it connected Samhain 2015 (and superbly at that) to its TSW-themed single player experience The Park. So of course when the studio put out yet another Secret World spin off game at Halloween, folks were going to anticipate a connection. And with Hide and Shriek involving Innsmouth Academy as well as introducing a rival school, who wouldn’t be bubbling with excitement for the prospect of learning more? With no connection to be had, it was — and still is — a major let-down. Hopefully we see that connection sometime in the near future anyways, even if not for Halloween.

The possibility of lore

The other thing that had rubbed folks the wrong way was the gating of event lore behind RNG boss loot drops. Like story, lore is something people crave (lore is a little microcosm of story after all), and making it possible that people could miss out despite putting in all the work they can is just not acceptable. Not getting rare loot is fine, but not getting lore?

I am all about seeking high and low for those hidden little gems of golden goodness. I am just fine finding out one is a loot drop from an event mob. What is not OK to me is that RNG was added to the mix. Some of us have, and I am not even joking, totally abysmal luck with RNG. You can do everything right, and do it over and over and over and over… and still not be rewarded for your efforts. I didn’t like when it happened in a previous event either, but at least then those SD cards became tradeable and folks had a possibility of acquiring them even when totally out of favor with the RNG gods.

One of the best aspects of TSW comes to the rescue here: the community. Not only did the community piece together the clues but — as always — it actively helped folks do the event and obtain the lore by calling out in the event channel when the little golden goodies dropped. 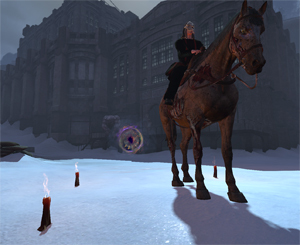 The Rider Came, and it went

All that said, just because the event didn’t soar above last year’s didn’t mean it wasn’t worth doing at all. Figuring out the clues was fun — I daresay the best part. I am totally up for doing an event like this again (hopefully a different time of the year, though)! And of course, there was lots of cosmetic loot to be had between the side mission, the boss missions, and the store-bought loot bags. I participated, and I don’t regret it. But I do still mourn what could have been as far as story. And I still have some hope for next year’s event to return to the formula of Halloween stories that top everything.

Speaking of hope, there is another little tidbit of hope that a friend introduced to me. In TSW, you suspect everything, and you never discount that things aren’t tied together. So, he wondered whether The Rider might somehow be tied to the big TSW update that was hinted at during the event. Could The Rider actually be a part of a story to come instead of a part of a story from the past? If so, that would make the event a bit more fitting into the formula, even if we won’t see the result until we can look back. And that is something to look forward to! Maybe we will have more hints and teases over the months leading up to this update. We will see.

The Daily Grind: What old inventory items in MMOs do you keep around even though they’re dead weight?

The MOP Up: Naruto Slugfest steps up to bat