Greetings, men and mer. It’s that time of year again when I take a look back on everything that Elder Scrolls Online has given us and give it a rating based on my opinion. However, I don’t just want to grade arbitrarily; I like to use one of the oldest measurements for online roleplaying games: Bartle’s Taxonomy.

Those who haven’t been a part of the online world since the ’90s will likely not recognize the name Richard Bartle, but he was one of the founders of online roleplay gaming. He co-created MUD1 and wrote many papers about online gaming and the people who inhabit that world. Besides the original taxonomy, Bartle’s work was famously turned into a test that asked a series of questions that would fit you into the taxonomy grid of four categories: Socializer, Achiever, Explorer, and Killer.

Unfortunately, the original test no longer exists, but 4You2Learn has a similar one to find out where you fall. Of course, few people will sit 100% in any one category, but it’s the balance of all four that make for a fun game for the largest number of people. I will explain what each group is about as I give the grade.

Although I like many aspects of all the categories in Bartle’s taxonomy, the socializer category is probably where I fit the best. I enjoy doing things with other people. I like group content, guilds, and other group related content both casual and strategic. However, Elder Scrolls Online resonates differently with me: I play the game mostly by myself. It’s not because ESO is lacking in the group content department or that it’s difficult anymore to group up with people. I think it has to do with the series as a whole. I’ve always played that by myself, and it just seems natural to play this game by myself. But that’s not to say that ESO hasn’t made great strides with its social-friendly content.

I think the biggest thing we have to look at is One Tamriel. Of course, it’s not perfect. The storylines can seem a bit wonky because you’re picking them up in the middle, and there is no more ROFLstomping your friends through some of the lower-level content. But One Tamriel has allowed players to do pretty much whatever they want with their friends regardless of level or faction, which was the whole point, right? As I’m a social-focused player, this hits me in the feels, and I’m extraordinarily happy with the results.

Personally, I still play the game solo, but I have seen the effects of One Tamriel in social activities in the roleplay community and group-finder activity, in general. I like to think that One Tamriel is exact what the game needed.

Unfortunately, the Achiever has always been a bit of a difficult one to measure accurately in ESO. Without a straightforward achievement system, the game must be measured in rewards and shinies given to players for accomplishing specific goals. Achievers like to fill up bars or make numbers bigger, but they also like the rewards of filling up those bars. ESO isn’t short of bars to fill. The level system alone adds more bars than can be filled in a lifetime, and each of the expansions added to those nonlinear skill trees.

There are plenty of motifs and other collectibles in the game that will get the Achievers mouth watering. Unfortunately, those items are usually offset by a similar or better item being available in the Crown Store, especially the mounts. Although the achievement system — if you can call it that — in ESO isn’t bad, it’s not great either. I will call this one slightly above average because it’s still fun but it doesn’t stand out as a great system. 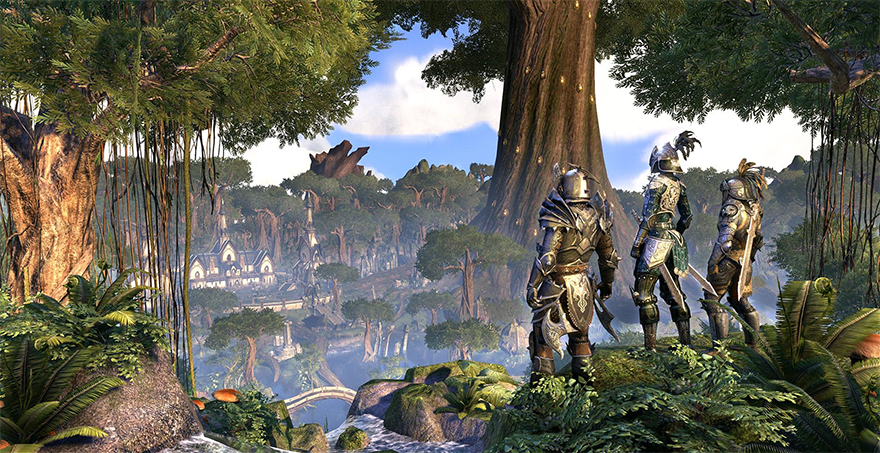 I’ve been rather harsh on the Explorer category in the past because this is probably number two on my list of favorite things to do in an MMORPG. In the single-player Elder Scrolls games, one of the best things to do was to stumble on quests, items, and points of interest completely on accident. However, ESO has always seemed to be more of a guided tour than actual exploration. All the POIs, quests, and other items are always pointed out on the map. But I might have graded the game a bit too harshly in the past. As one commenter pointed out last year, the minimap and location mods so many of us use actually take away from the exploration factors of the game.

Although I think that allowing those map mods should count against the exploration factor of the game as a whole, the game is quite different when you don’t use them. And with the level-syncing addition of One Tamriel, an Explorer can look off into the horizon, say, “I want to go there,” and actually go there. That’s really the lifeblood for the Explorer: What’s over the next hill? Because of this, I have to give ESO high marks in the Explorer category.

I’ve always looked at Bartle’s Killer category a bit differently than the name suggests. I’ve always looked at the Killer as a competitor: someone who is compelled to pit himself or herself against the other players in the game. The Socializer looks for a cooperative way to interact with other players, while the Killer looks for competitive ways. That means a game needs ways not just to directly engage with other players but also to measure player vs. player.

Although I think the RvR of ESO is great, I don’t know that the Imperial City actually added to the solo-centric PvP ZeniMax might have been hoping for in the long run. The developers also missed a phenomenal opportunity to create another open-world PvP system with The Dark Brotherhood DLC. The Maelstrom arena from last year’s Orsinium DLC still stands a great way to mix PvE in the Killer’s competitive nature. But it’s older content at this point, so activity has dropped overall.

Of course, the discussion only begins here. These are my thoughts, but what are yours? Did I hit the marks in my assessment, or am I way off? While you’re down in the comments, let me know where you score in the Bartle test.