I like naval combat in my MMOs. That’s my weakness. Vehicle combat is great, but for some reason, I especially like boats. When I heard there was another pirate multiplayer game being revealed at E3 2017, I knew I’d have to check it out. Fortunately, I’d already been scheduled to check out Ubisoft’s press section of their booth, giving me a rare opportunity to see Skull and Bones behind closed doors.

Let’s get this out of the way upfront: Skull and Bones is not nearly the same as Sea of Thieves. At all. Sea of Thieves is a good pirate simulator. You get drunk, you swing a sword, you dig for treasure.

In Skull and Bones, you’re a pirate ship, not a captain. Your ship is your class, like a tank or a sniper. It’s much more about boat play than character play. Don’t think of the triad though, as I didn’t see any “healer” type boat. And don’t think you’re just in a death match, as the pirate aspect was still there, even in my battleground-esque demo. 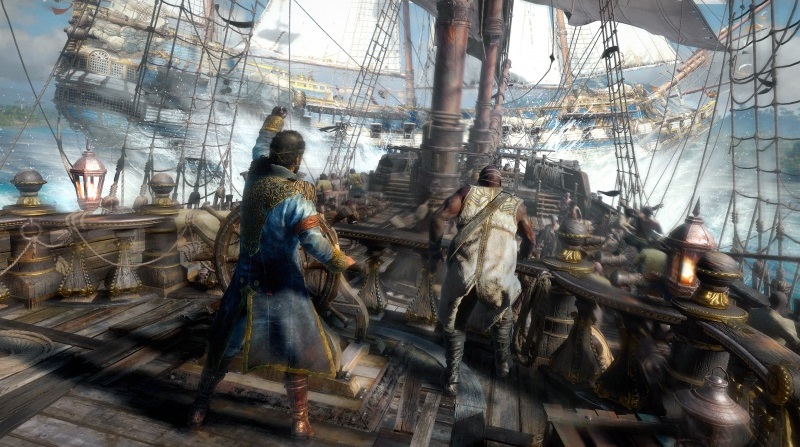 Out of the three ships we could play, I found I was enjoying the Enforcer the most. The long-range Marksman ship was appealing after one destroyed me, and the quick-moving Bruiser seemed decent, but as a tank man, I was all about the bulky Enforcer. The close-range firepower was nice, as was the high durability of the ship. Boats have two “health bars,” represented by each side of the ship. Getting out of combat lets you regenerate your health back to about 50%. However, when you’re low on HP, it’s easier to be boarded, which seemed like instant death. I never was boarded myself, but every time I boarded an opponent, NPC or player, it ended badly for them. Boarding resulted in a rather brutal cutscene of your pirates doing pirately things to the boarded vessel’s crew — the violent kind of piratey stuff, though, not the funny Johnny Depp stuff. Yes, mechanically you get more treasure, and I think I recovered some HP, but let’s just say the cutscene is not for a Disney audience.

Although it’s slow-moving, I felt as if the Enforcer had an easier time turning and blasting opponents down as a survival technique than the other two ships had at escaping my reach. That being said, it also required more teamwork. That’s important to consider because unlike my Sea of Thieves demo, this one didn’t allow breathing room to carry someone while explaining controls or tactics. Our demo leader suggested targets and strategies, but the game required our separate units to act as a fleet rather than as individuals. I think that made casual teamwork a bit harder, at least on me and my teammates. I prefer being an avatar controlling a vehicle as I usually can juggle a few gameplay controls decently to appear above average, rather than deep mastery of a single style. 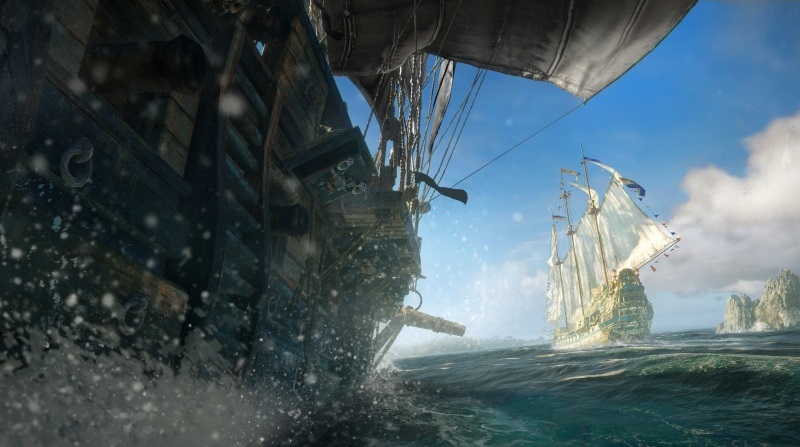 While my personal preference is working with several people on a single vehicle, being my own boat still has some appeal. For example, one tactic we encountered was ramming the enemy, which is like a double-edge attack that can hurt you both, but a feature called “bracing” reduces that damage. As in Sea of Thieves, there’s a need to check the crow’s nest, but you do this yourself rather than asking someone to communicate with you. The balance between seeing what’s immediately near you vs. what’s around is still important, just in a different way. You may spot enemies from far away but miss that they’ve already got someone blasting your starboard side.

One reader suggested that combat in naval-style games is about knowing how to circle and unload, and while this did give demo-goers some advantages, I suspect a few factors may ensure that Skull and Bones doesn’t devolve into this. The long-range Marksman, for example, can be used with Enforcers and smart terrain management of jutting rock formations and islands, which encourages players to use tactics like circling around the back of a blockade or sending a small Bruiser out as bait.

The demo made the game seem lobby-based, not so sandboxy, as have the previews we’ve seen. Maybe I’m wrong, but more so than in Sea of Thieves, I was getting a lobby feel. We weren’t in a death match, but it was similar enough. Our objective wasn’t just to kill each other but to take out the merchant ships and enemy pirates, then escape with the loot before the pirate hunters got us. This meant that we were trying not just to avoid death but to hold onto something. Once the Pirate Hunters arrived, it seemed like respawning was out of the question, a feature that often doesn’t sound fun but I personally enjoy. Risk vs. reward and all that. Surrounded by a much more powerful enemy than our combined mights, both of our pirate teams scrambled to escape with our booty intact. Fights still broke out, and last-minute escapes and plundering did occur, but again, it never felt like a death match. In fact, my final match ended with me so very, very close to the exit moments away from death by Pirate Hunters — but alive at the buzzer.

The addition of NPC targets with PvP may not be new, but it’s something I’ve been enjoying in recent lobby titles like Evolve, Titanfall, and pretty much every MOBA. Having secondary targets that are a bit easier to predict ensures there’s at least something for both PvE and PvP players to enjoy if your friends’ tastes don’t match your own.

The current plan is for players to essentially have a fleet of ships they can choose from and outfit. I didn’t see any examples of ship customization/outfitting, but I can see the appeal, even if it may not be my preference. If the game will have more exploration, I’d love to see it, but for now, Skull and Bones is looking more like a quick way to experience piracy rather than a detailed, grog swilling romp. Battleground enthusiasts will probably have a great time, but explorers and sandboxers may want to wait for more details.