END_OF_DOCUMENT_TOKEN_TO_BE_REPLACED
Proving once again there’s no end to the Hearthstone gimmicks and pranks it will pull, Blizzard has announced Ice Cream Citadel, a pop-up ice cream stand at San Dieco Comic-Con this week, all in honor of Knights of the Frozen Throne.

“Located in the PetCo parking lot just a short walk from the San Diego Convention Center, Ice Cream Citadel will provide visitors with free ice cream in two flavors: ‘Villain-illa’ and ‘Scourgeberry Sorbet.’ In partnership with Yelp, Blizzard has also created a Yelp business page for the pop-up, titled ‘The Lich King’s Ice Cream Citadel,’ where users can rate, review, and post photos of their experience. Starting July 18, those brave enough to call the business (1-855-LIC-HKNG) will be greeted by the Lich King’s chilling voice.”

Of course there’s a live-action trailer to go with it. Maybe fallen Arthas will be better as a soda jerk than as a game dev? And you guys thought our puns were terrible! 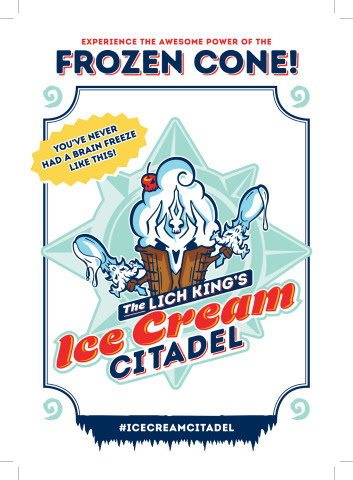 Source: Press release. With thanks to Eliot for the awesome/terrible title!
Advertisement

RIP I can’t use this joke anymore. That’s ok I stole it from Nixxiom anyway.

Knights of the Frozen Cone?