Heading into Shroud of the Avatar for the first time was a bit of a strange experience for me, right from the start. Usually, when I start playing a new game, I start forming impressions and then spend the next few weeks refining those impressions in either direction. This time, I am utterly unsure of how I feel about the game, and I suspect that the next few weeks are going to make that more complex, not less.

And part of me can’t help but wonder if some of that is just a matter of missing vital reference points.

I don’t mean that in the sense of the game being actually impenetrable; it’s just that I find myself constantly asking if something that bugs me is, in fact, exactly the way it’s supposed to be for fans of the genre and Garriott’s prior work. Which is a trip, let me tell you that. I’m staggering through dark woods, getting my throat chewed on by a wolf, and I’m seized with the urge to ask the wolf if this is, in fact, an intended portion of design. You know, between bites of my trachea. 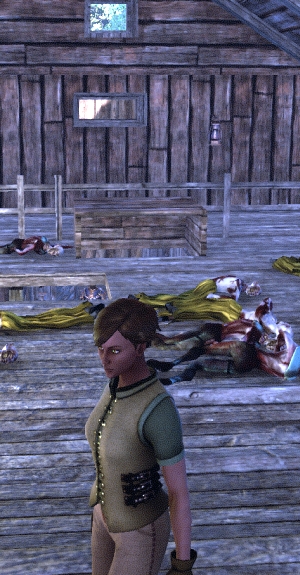 The game starts off by informing me, of course, that I’m sitting at my computer reading about fantasy things before getting sucked in. This is something I was vaguely aware of and also rather dislike. It’s a video game telling me that the video game I’m playing is me in a video game. There’s a curious feeling of simultaneous self-aggrandizement and lack of creativity, like the best thing they could think of was to make you super-important.

It’s also the worst sort of hero narrative possible, since it relies entirely on the notion that just by showing up, you’re awesome. Boy, it will suck for these dudes if the “avatar” turns out to be a self-interested slopstop, won’t it?

What I definitely liked, though – to my surprise – was the design of the Oracle. I’ve also seen at least one of her Watchers, and that honestly proved more effective at making me ask questions than anything else. The Oracle looks like a robotic fair attraction from the not-too-distant future that somehow went off the rails, and everything about her appearance and aesthetic manages to look wrong in just the right ways.

Seriously, it feels sinister and alien and wrong while being completely welcoming on the surface. I was digging on this and also was pretty fond of seeing one of her scurrying Watchers later.

As the vote went to Truth, I started out at the site of the Blood River massacre, where it looks like a whole lot of humans decided to stomp in and slaughter the heck out of some elves, most likely because Justin was leading the charge. This, unfortunately, is where a few bits of the game kind of rankled me. There’s a lot of emphasis on talking to NPCs and typing responses to them, but the parsing is… mixed. When someone asks you what your name is, apparently responding “You can call me Ceila” results in the NPC reading that entire phrase as your name, leading to shouts of “This way, You can call me Ceila!”

Being who I am, I immediately grabbed a sword and knife as soon as possible and began dual-wielding my way through combat as it came up, which wasn’t for a while; I had to investigate a fair bit through the town. The down side is that there are no real sparkly bits to prompt investigation and almost everything can be picked up, taken, or moved around at will; the up side is the exact same thing.

Here’s one of those places, in other words, where I found myself asking “is this bad or is it supposed to be this way?” on multiple occasions. There were lots of bits that felt unclear or strange, often requiring an arcane series of actions to progress, but I’m not really clear on whether that’s a problem or if it’s purposefully keeping close to the game’s origin points. It’s not user-friendly, but this may well be a sort of hostility that the target user expects from the game.

Ditto combat. I wouldn’t say that combat is one of the worst systems that I’ve encountered, but it consisted mostly of casting a spell when it had cooled down and then clicking a lot to whack at things with my weaponry. Not exactly what I consider engaging… but I suspect it’s intentional? To emphasize choosing odd builds and ability combinations over specific close-quarters efficiency? I don’t know.

I also managed to get lost on my way to the city of Aerie due to the way maps are structured; I wound up in the Blood River Outskirts and getting rather lost about where I was supposed to go, not realizing that I was supposed to go further in a different direction to wind up on the world map. I certainly did want to avoid combat as much as possible, I wasn’t even very clear on what I was supposed to do with combat, which made it a bit frustrating that it seemed so difficult to avoid along the way.

And again, it all felt like… not my first choice? But the way things were meant to be structured. There was never a time when I felt like the designers had just made a mistake, only times when I felt like I wasn’t having an experience I would have picked otherwise.

About the one thing I can point to as definitely bad is the performance; the game seems rather poorly optimized, and I frequently hit stuttering moments despite having a computer that should be more than capable of handling it. Early access and all that, sure, but even with that being said…

I’m sure that my quest leads me further into Aerie, but I’m still just stumbling around here, and for all I know that’s what I’m supposed to do. So today’s poll is a little different than usual, but it’s a poll and it’s a case where I have options this early in the game, so that’s a good thing.

CMA: How should I keep going in Shroud of the Avatar?

As usual, that poll ends on Friday at 6:00 p.m. EDT, so you have plenty of time to get your opinion in. You can also share your opinion right down below in the comments, and really, feel free to let me know if all of this expected stuff or things that are actually unique issues to this particular game. I’m legitimately interested about that. You can even just email me at eliot@massivelyop.com if you don’t want to put your words down there; it’s totally all right with me.

Either way, I’ll be back here next week with more ambiguous and perhaps none-too-clear adventures. It’s a thing I do.

Welcome to Choose My Adventure, the column in which you join Eliot each week as he journeys through mystical lands on fantastic adventures — and you get to decide his fate. To be fair, staying up late at night reading about fantastical places is something that he already does on the regular; it’s just that he views being transported to many of them as more of a punishment than a success.
Advertisement