Massively OP tipsters Gankstar and Scott both noticed that just one month ago, Daybreak filed a trademark for what appears to be an expansion or new game. We’re guessing the latter.

We’ve known Daybreak was working on something, possibly an FPS, for quite a while, thanks to a stream of job openings, but this is the first time we’ve gotten a clue about the project’s name. 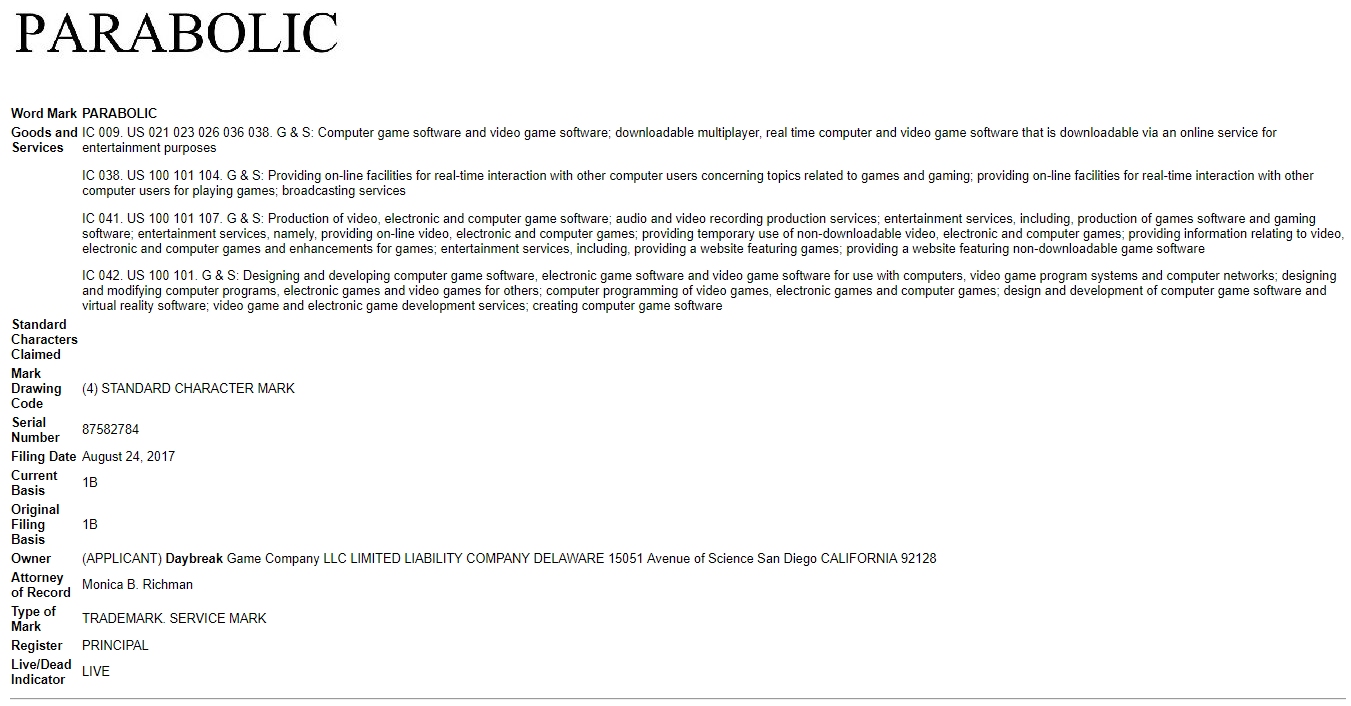 Source: Trademark search. Thanks so much, Gankstar and Scott!
Advertisement

I’m not a hater. I chose to stick to the positives, and spread joy rather than hate. I think most of my posts speak to that. But I have to say that there are so many times I feel like popping into a game, and then remind myself that it’s Daybreak, and decide not to. I really don’t feel that this is a gaming company at all. They give off the vibe that they are a bunch of rich investors searching for their ROI from the acquisition of SOE. And I know that, at the very top, most companies these days are just that, but a lot of them have been smart enough to hire that layer in between that appeals to their consumers. I just feel like Daybreak wants to rob me…

Good thing it is trademarked now. Because everyone knows that with a name like Parabolic, it is going to be a hit.

Sorry DBG. Low hanging fruit and my feathers are still a bit ruffled because of EQN.

But, it does set ones mind to wonder. Parabolic? A Satellite Dish repair simulator? Or maybe a new type of voice activated MOBA using a Parablic mic?

I’m assuming they’re going with this definition, but that still doesn’t tell me anything other than it’s a game with a story. So, it’s a game.

par·a·ble
ˈperəb(ə)l/Submit
noun
a simple story used to illustrate a moral or spiritual lesson, as told by Jesus in the Gospels.
synonyms: allegory, moral story/tale, fable, exemplum
“the parable of the prodigal son”

Or maybe they really are just making a math game!

I am hoping from my source of the definition it will be much more mathematical than metaphorical. :)

in other words crap.

Daybreak, instantly lose all interest, I never will play any Daybreaks game even if they pay me for it!

I’m thinking perhaps it will involve, say, 100 players, scavenging for weapons, and an ever-shrinking circle in which to fight, and the last one wins. Wait, has that been done before?

The only thing going Parabolic is my disinterest in DBG.

The consensus last year seemed to be that they are working on FPS game, so this is it probably.

I’m very neutral, but the fact that they are still working on a new game is at least good for the existing jobs and perhaps for existing games and their players also.

What they done to Landmark really soured me from anything they put out. I don’t wish bad on the company but I’ll be passing.

And what they did to EQN.

In all fairness “what they done to Landmark” and “what they did to EQN” was done because of the decisions made by the management of SOE, those folks didn’t survive or long survive the sale of SOE to CN – it clearly wasn’t worth saving at that point. I can’t speak to the state of other DBG titles, but EQ’s last couple of expansions have been significantly better than last couple under the management team that was in place before the sale. I have more faith in DBG now than i did in SOE 5 years ago.

You must not play EverQuest 2 then, because it went downhill at an incredible pace once they turned into Daybreak.

You’re right, but i guess you didn’t read my entire post because i specifically said that i can’t speak to the state of other DBG titles…

Sorry I was too flustered by your inane comment that some how management is better. The reason EQN was ruined was because they were forced to keep undercutting it to make the sale of the company look more attractive to buyers, Sony was trying to sell the studio for years and EQN development debt made it look horrendous, stopping development outright was part of the deal to sell to CN.

EQN was ruined because of one person’s vision and unchecked ego and Smed’s poor decision making in allowing it to go on so long. There are too many former devs from multiple teams (including the EQN team) who have finally spoken out on multiple sites regarding what went down for me to believe it’s simply a case of disgruntled employee-itis and has zero basis in fact. Yes, the company was bleeding money for years due to mismanagement, but that was more than just EQN…

Who said it was just a disgruntled employee? Oh, and here is what current management thinks of EQ1 and EQ2 https://twitter.com/DaybreakGames/status/911232478228164609

I couldn’t care less about them not having posters, i know EQ, EQ2 and PS2 aren’t their flagship games. I can accept the fact that they are the games they are going to keep milking for as long as they can. I am ok with that as long as we continue to get decent or better expansions.

I won’t presume to argue or disagree with you about EQ2 because i don’t play it, i will take your word for its current state. My opinion is based upon my experience with EQ, and EQ only and discussions i have had with former devs. My overall experience has been a much more positive experience since they showed Smed, Ponytail, etc. the door. The only thing that surprises me is that EQ2 is in such poor shape, as you say, with Holly in charge; i would have figured she would have been a much bigger advocate for EQ2 after leading the team for however many years it was before she became producer for EQ and EQ2.

To be fair, DCUO is pretty awesome, but I do wish EQ2 would get an updated engine and doesn’t look so damn old.
I would gladly play it again, but it needs to not look like it was released in 2004.

Me too. Daybreak is not getting a single penny from me after Landmark.