With the constant clamoring from fans for Daybreak (or someone) to create an honest-to-goodness next-gen sequel to the EverQuest franchise, you’d hope that it would actually happen someday. Obviously EverQuest Next itself didn’t pan out — not that everyone considered that title a sequel or even deserving of the EQ name. But it was impossible not to find a glimmer of hope at the news that Daybreak was hiring for positions involving a new game.

Now before you hyperventilate: This is just speculation. I know EQIII the FPS is a longshot. If it has any ties to Daybreak’s existing portfolio at all, the new game is much more likely to be related to PlanetSide 2. Chances are it is just a brand-new game and concept. But that doesn’t make the speculation any less entertaining. How would you envision a Norrathian FPS? These are a few of my thoughts.

Something I’d really look forward to in an EQ FPS is a return to the faction play of Freeport vs. Qeynos. I miss those days in EverQuest II when you couldn’t safely walk into the opposing city, when broker sales were restricted to faction. If you wanted to buy something from the other city, you had to work your way down to the black market (not to mention pay a hefty fee!). You could go so far as to restrict language to each faction and never allow the other to learn yours. Of course, you could also make the exception for someone who goes through a betrayal process; think of the spy opportunities if you could understand the plots and plans of your enemies?

Extend the idea beyond just two factions. Instead of it just seeing flavor text as you walk by NPCs, you could literally be fighting for control of your enemy’s capital! Battle your way across Antonica and Commonlands to break down the doors of the city. Wipe out the guards, conquer the schools of the mages, then toast your victories in the taverns! Expansions could open more territories, which we already know as zones in the game. You could try and take strategic outposts, also known as favorite locations/dungeons. You’d literally be fighting for the rule of Norrath. 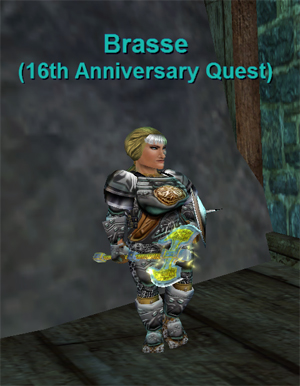 Lobbying for a lobby game

Instead of a large scale battlefield, what about a lobby-based contest? You could pit favorite NPCs against each other in a MOBA setting. Antonia Bayle and Lucan D’Lere would have to be unlocks obviously (or purchased from the Marketplace), but there are a host of fun characters from both EQ and EQII you could populate the roster with. I’d totally play as one of The Burglars, those dancing halflings in the bar of Brell during Brewday! Speaking of Brewday, who could resist being Brasse for a day? With an axe in one hand and a stein of ale in the other, she’d definitely be a force to be reckoned with. There’s also Qeynos’ Captain Campos or Freeport’s Lucanic Knight Marcus Rusonius on their on their fiery pegasi, both of which would strike terror into the hearts of any lowbies trying to sneak into the opposing city. With so many zones filled with so many NPCs, there is certainly enough for a large selection at the beginning, with plenty more for additional heroes later.

Here’s a thought: You don’t even have to use premade NPCs. Take the awesome races and classes of the two EQs and let folks pick their favorite to make a customized character. Let folks cosmetically alter their champion however they want to, and just have a set skill set attached to each class and perhaps a racial bonus to each race. That would certainly keep the spirit of customization alive. You could do race/class combos that are locked like in EQ, or have very few restrictions on which races can play which class like in EQII.

Or maybe make the champions the Norrathian gods themselves. Yes, this might limit the pool of characters, but can you just picture Innoruk and Erollisi Marr — the gods of hate and love, respectively — working together against the trickster/thief Bristlebane and Karana, the Rainkeeper? You could keep score of the victories of each god, and have a little influence indicator for Norrath. How exactly would the world look if Cazic-Thule, Lord of Fear, happened to be topping the influence charts? Maybe that influence would actually change which maps were available to play on and which objectives players were fighting for during any given week. For some extra avatars, toss in some really big, iconic mortals like Bayle or D’Lere.

Matches could follow the typical MOBA formula, with single-lane and three-lane battles. Or maybe it could just be team blasting team like in Wargaming’s World of  trilogy. You don’t need much more of an objective than Freeport citizens killing Qeynosians, am I right? Perhaps there could be siege mechanics that involve escorting a payload à la Paladins. battlefields could consist of favorite or iconic locations like Castle Mistmoore or Halls of Fate. There are certainly plenty of dungeons to choose from. (I’m pretty confident folks will beg to NOT have a Nektropos Castle map, though!)

The combat wouldn’t need to be restricted to the ground, either. There are plenty of mounts and flying races in Norrath, so the game could follow in the footsteps of World of Warplanes or Cloud Pirates. Aerial combat definitely does add levels of challenge to a fight. I’d be happy to take my Arasai and shoot down a few Koada’Dal. What?

Maybe the new game would just be taking the current PvP arena out of EverQuest II and making it a separate game. I’d definitely have to root for that not being the case, since that  battleground is not exactly a popular feature.

Not in the cards

That all said, I am not sure that breaking down the complexity and beauty that is EQ and EQII into an FPS wouldn’t just totally break my heart. They are a rich MMORPGs with many robust systems, and to strip all that away just to play on some semblance of nostalgia would probably be at the top of the disservice list. Then again, maybe, if it is done right, it could be a fun compliment to the Norraths we love. The operative phrase is done right. And just think of the cross-promotions you could do!

I don’t truly think the upcoming game will be connected to the EverQuest franchise. But if it were, how would you see it?