END_OF_DOCUMENT_TOKEN_TO_BE_REPLACED
My first week of playing Guild Wars 2 again was interesting, in no small part because it’s rare for my playtime to be so devoted to being able to play what the vote indicates. Yes, it’s true, I did not actually get much playtime in for Holosmith with this first week, simply because… well, how could I? I had to unlock the elite spec first, and that requires a fair bit of doing, enough that it inspired a completely different article.

So that was some frustration, and it leads to more polls this week, but I don’t want people to come away thinking that I’m already not having fun with the game. Quite the opposite, in fact; while there are frustrations in how things are designed for unlocking elite specializations, there’s enough to like about the game on a whole that I can’t complain too much. But let’s start at the very beginning, which I’ve heard is a very good place to start.

First of all, it’s important to note for purposes of full disclosure that I was granted a comp copy of Path of Fire, and the account I am using for play is, well… that account. This in and of itself is a bit unusual for me, as I rarely even ask for comp copies. But those of you who have read my writings for long enough know that I prefer disclosing any and all relevant information, so there you have it. The copy I have was given to me for free by the company for the initial purposes of review and evaluation.

After some discussion with friends, I ultimately elected to make my character a plant. I like plants, as has been stated before. The initial experience of making a Sylvari seems to have changed very little since the game’s launch, with no notes about how the Sylvari are minions of Mordremoth or anything; I realize that was a late-story reveal back in the day, but it seems like something that could do with at least a mention when starting out. Color me picky.

Once that was done, I boosted to 80, and wow, head rush. You know how other games with level boosts give you, like, a walkthrough about how the game works? GW2 doesn’t do that. It drops you into the Silverwastes with a “good starter build” and then tells you to have a grand old time. Fun for the family!

The problem, of course, is that if you were rolling a character for one of the new elite specializations, you can’t actually play one. That may seem pedantic, but considering that they’re both a major selling point and frequently very different than the base profession? It’s kind of a big deal. Engineers jump into melee and have a whole new slew of mechanical options if they have the Holosmith specialization, but you can’t actually get it without 30 Hero Points.

Of course, this is made easier when you get to the Crystal Desert and find yourself getting 10 points at a go for the various challenges around the region. But that’s, well, a counterbalance to a counterbalance. Especially when you consider the fact that the builds of the game are so firmly based around having all of your traits present and slotted, so you’re basically choosing to handicap yourself somewhat right off the bat…

Yes, I’m kvetching a bit. Here’s the bright side: Engineer is still actually fun to make builds for and play even with all of those complaints. My build, then, was based on the one I plan to eventually use, but with enhancements to rifles instead of all of the various holosmith skills. It worked out all right. Lots of explosions and bombs, rocket turrets, boosting turrets, and so many stacks of vulnerability on enemies.

Of course, it requires tweaking, but the other bright side is that tweaking the mechanical side of your build is nice and easy. The stats on your gear are a bit less so, but I can appreciate the fact that you may have to tweak and refine a lot, but you have lots of chances and little impediment to doing so. That’s worthy.

I didn’t head to the Crystal Desert to start unlocking Holosmith, though; I headed there because while I waffled on starting there or farming old hero point challenges to unlock the spec, I’m here to see this expansion, so it makes sense to see the expansion. So off I went, through a bit of story that is rather unhelpfully opaque if you haven’t been following everything along the way. There are some nods to the events of Heart of Thorns along the way, but the story really does require some knowledge of what’s (and who’s) gone before to make full sense.

At least, that’s the case with the lead-in. Once you actually get to the desert, things get a bit more straightforward. Balthazar is using burning minions to do bad things, stop letting him do bad things. Easy.

I do feel very concretely that I haven’t seen all of the story leading up to this, of course, because there are vague nods about why Balthazar is doing everything, and there’s a creepy sense of him having an actual point. The idea of gods giving up on humans fixing things and taking matters into their own hands is a plot arc right now in one of my favorite comics, and it’s interesting to see it because it’s really a matter of perspective shift.

Perhaps I’m assigning depth that isn’t there, I don’t know. 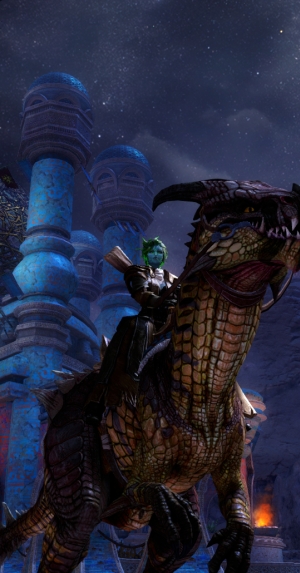 Fighting my way through Forged minions unlocked my first mount, which I can be unambiguously happy about. The mount system is one of those bits of obviousness that seems to have taken too long to be included in the game, and yet the core idea – that mounts don’t just make you faster but change the way you move – is at once obvious and nice. I like that you have more to your choice of mount than “what looks the coolest,” and while I understand places where that falls down, this works well for GW2.

Once I finished up the initial part of the story to unlock the region, I set about finding the hero point unlocks needed to unlock Holosmith, and I put on my complimentary sword and an offhand pistol. Of course, there’s a lot more needed to fully unlock the spec, and I have to admit that it’s frustrating to now be functionally down one trait line, but them’s the breaks.

It’s kind of a product of the game having multiple leveling tracks at the same time, and it’s kind of compounding the issue compared to the original Guild Wars just giving you skill points for levels beyond 20. There’s some frustration here, that’s my point; on the flip side, Masteries are also cool, so I can understand that being in place as well.

The combat still feels a bit floaty and unclear when it comes to dodging, which I’m not fond of, but I do like the various options, and time seems to have made the various abilities I’m using feel more impactful as I fire away. My tool belt options are also nice and fun; I like, for example, that using a grenade kit allows me to swap into an AoE damage mode when necessary. (I will probably swap that out soon now that I have my sword.) But it also gives me just a grenade to toss at the same time, making it meaningful even without the full shift of weaponry.

So there are frustrations, but I’m also having fun. And I’ve unlocked the elite specialization I wish I could have started with, which means that now it’s time for me to start in on…

Well, gee. It seems like polling based on what I should play doesn’t actually offer a direction, huh? But luckily, I have options. Three main ones, as I see it.

The first option is what I like to think of as the movie option, following the storyline as my primary focus. Obviously, diverting to pick up more hero points will be necessary along the way, but my focus here will be on following the main story through its paces.

Second option, meanwhile, is what I like to think of as the single-player RPG option, which means that I totally ignore the supposedly urgent plot to go fart around in the countryside. Yes, I’ll probably need to follow bits of the story along the way, but my main focus will be on filling hearts, running events, grabbing vistas, and so forth. I won’t be diverting in order to grab hero points in this scenario primarily because, well, I’d be taking care of those anyway.

The third option is what I see as the weirdest of the bunch, but I think it’s important to put it out there as a potential choice. Go back to Tyria proper to pick up more Hero Points in level synced content which, at least theoretically, is more forgiving for a plant without all of her trait lines. Then, with a bit more unlocked for Holosmith, head back to the desert.

But that third option seems more like a side dish than a main course. So, dear readers, let’s determine my focus with… a poll!

CMA: Where shall I go in the desert?

It’s worth noting that whichever Path of Fire path I take next week, I plan to do the other one the week after. So if the vote says “focus on the story” this week, next week I’ll be ambling around the maps. That seems like a good way to balance both sides as necessary, in other words.

As a corollary, though, I think it’s important to consider that Ceilarene is going to be a bit weakened while she unlocks Holosmith fully. And I can, in fact, get another character boost as part of this project. While voting definitely didn’t go for starting out a low-level character, it’s possible for me to bring another high-level character into the expansion without focusing on an elite spec along the way. So you decide, dear readers – is this a good thing to do for comparison purposes?

CMA: Should I boost another character?

Polls, as always, are open until 6 p.m. EDT on Friday. I’ll see you all again next week with the next set of updates from the desert; until then, you can share your thoughts in the comments below or mail them along to eliot@massivelyop.com.

Welcome to Choose My Adventure, the column in which you join Eliot each week as he journeys through mystical lands on fantastic adventures — and you get to decide his fate. Are you proud that he managed to get through this entire column without praising Nightfall? He’s proud of himself.
Advertisement