With significantly higher revenue and sales coming in 2017, Funcom announced to its investors that it just came off the most profitable year in the studio’s history. The studio made $23.2M in revenue and $6.64M in profit during the period, a massive increase over 2016, during which it only made $7.3M in revenue. Even better, Funcom said that it has significantly reduced its debt and strengthened its position.

As for its games, Funcom said that Secret World Legends’ new story content is coming in the first quarter and is expected to bring back players and push user acquisition. Conan Exiles’ May launch is a source of particular excitement, and Funcom is planning on several marketing initiatives to push sales. Anarchy Online and Age of Conan were not mentioned in the report.

Of course, the studio is particularly excited about today’s announcement of its publishing Mutant Year Zero.

Funcom Oslo continues to work on a new Conan the Barbarian title, while Funcom North Carolina has greenlit a “cooperative online shooter” using the Heroic Signatures IP that is going into pre-production next month. There is also a third IP-related project that is being mapped out for the future.

The studio also tooted its horn when it came to the acquisition of half of the rights to Heroic Signatures IP for games and shook with delight over the development of an Amazon TV series starring Conan. 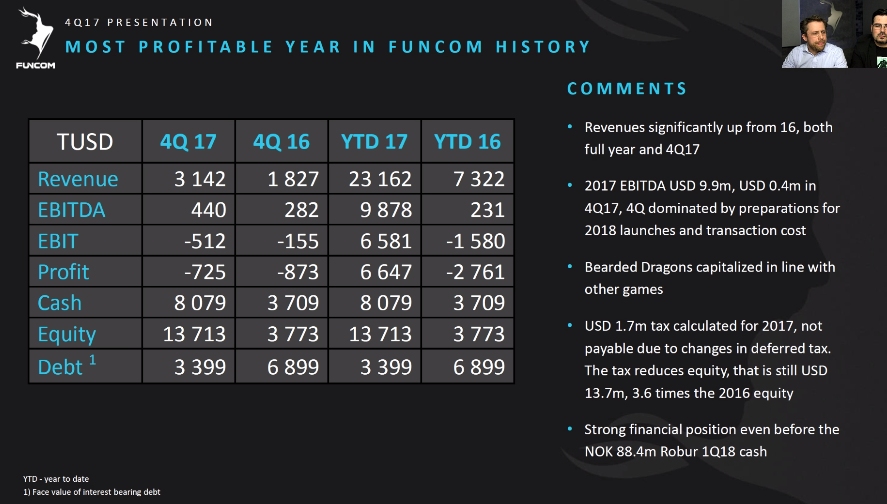 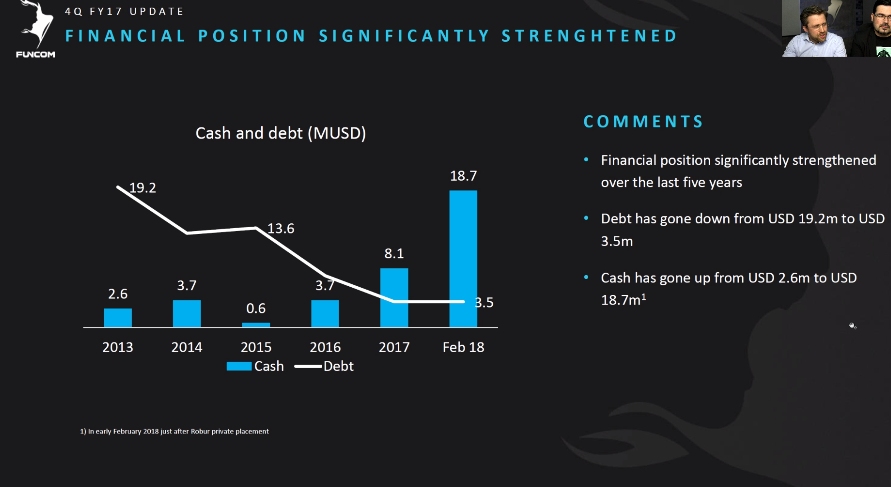 Hopefully this will at least keep the MMOs online with the chance of support here and there like AoC recently.

From my perspective, this is great news. I enjoy playing Funcom MMOs and want to see them continue delivering unique worlds to play around in. I haven’t bought Conan Exiles yet as I was waiting for more polish, but definitely will before it releases officially in May.

So I’m too lazy to open up the actual report, but if they went from $8.1M cash at EOY 2017 to $18.7M cash in February, when their entire 2017 year showed $9M EBITDA, the only way I can think that happens without debt is they also got a ~$10M equity cash infusion. Someone believes in them apparently

Which further confirms for me that I won’t be back to playing any Funcom mmorpgs in the future. The revenue that they’ve gained means that they’ll double down on what they’ve been doing. Joy. :/

And kudos Funcom, it’s good to see things look better. Funcom always was a developer with unique ideas. I’m sad none of their MMO’s was a blockbuster(Yeah, how much better would they have been with more money!) but it’s good that they can continue to make games.

The shooter is probably another Mutant Chronicles spin-off but I’d love if it turns out to be soloman kane(which has only limited firearms, I’m aware) or a Kult game.

This is good news, whether you’re a big fan of their games or not. And it also renews my silly hope that AO2 someday, maybe, could be a thing.

World of Warcraft’s Visions of N’Zoth is kind of a ‘horrific’...