Shroud of the Avatar’s release 56 is coming on Thursday, which means Portalarium’s latest newsletter includes recaps of some of the content the team’s working on. Of note, that includes the first playable version of the Obsidian Trials, which is basically the game’s version of PvP: 10-minute matches with a battle royale-esque shrinking map and a special currency for PvP-themed emotes, titles, and consumbles.

The studio also gives a preview of the ongoing revamp of the newbie tutorials, though that won’t be fully complete until September’s update. “We are also removing the tutorial elements and having them be almost entirely focused on story,” the team says. “In the case of Solace Bridge this means rebuilding it which we are excited to show you progress on in this week’s update.”

But I can’t help it: My eye was drawn to the part of the newsletter where Shroud of the Avatar basically puts R2-D2 into the game in the form of “the cylinder automaton pet.” Yes, he goes live this week as part of the “Sky Navy” suite of items. I’m smitten. 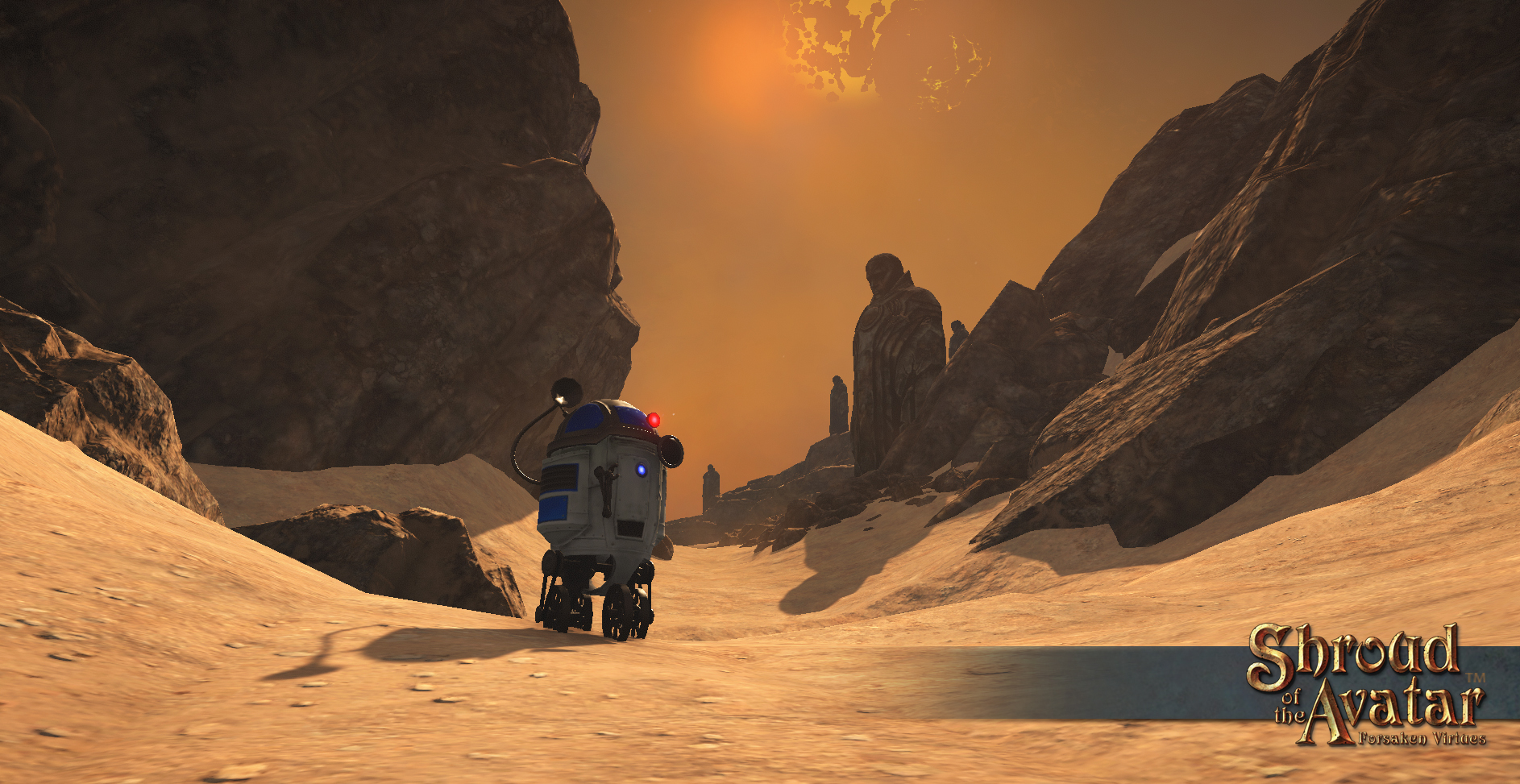 “Where do you think you are going?” the studio quips. “That way is much too rocky!”

This game has a free trial, feel free to try it using that. Join the official discord if you do.

The game has its problems and is pretty rough, but the one thing I will say is it has the best damn community you will ever come across, and that by it self-makes the game worth playing, especially if you like the “MMO” feel of playing with other people and being part of a community.

Also not to mention once you get over the learning curve the game becomes insanely addicting.

I am not sure why this game gets such a hard time . I tried it a while on its trial mode and it was OK , it wasn’t the best mmo I have ever played but it still was quite interesting .

While it’s not something I will rush out and buy I certainly would get it when its on sale for the right price ( ten dollars or less ) and give it another go .

I am still waiting for the “story even more compelling than Ultimas IV-VII, create a virtual world more interactive than Ultima VII” in order to “adventure in an interactive world where their choices have consequences” as it is advertised on Kickstarter.

Also I am waiting for the game, Richard Garriott described in this video, saying: “With Shroud of the Avatar what I am hoping we can do is to create a story-driven solo player experience that hearkens back to somewhere between Ultimas IV and Ultima VII but that ALSO has the ability to play online”

Also I wonder why SotA suddenly is a MMORPG when on the Kickstarter website it says “Though Shroud of the Avatar won’t be a massively multiplayer online role playing game, it will be a multiplayer game.”

Yes, I can absolutely understand why people are mad at this game and at Portalarium.

Frank, we say multiple times that it is selective multiplayer and open play mode will feel just like an MMO. That is on the initial KS page. I’ve seen that quote you have above before and it is from a FAQ on the page and out of context. Here is the full quote:

“Though Shroud of the Avatar won’t be a massively multiplayer online role playing game, it will be a multiplayer game. We will be describing this in more detail in our upcoming community blogs.”

Blog post #10, during the first half of the KS is where we clarified it. We said that it will feel just like an MMO but that we didn’t want to call it that because we didn’t know how many players we could handle together. Also, we say will feel just like an MMO on the front page and Richard’s own mission statement for it was “Multiplayer Online Game – which can also be played solo player / offline” right on the front page.

I normally don’t jump in on this stuff any more but out of context quoting stuff to make us look bad is kind of uncool so I thought it best to clarify. I just wish I get figure out why there are still a handful of people holding onto this argument for years and after we delivered exactly what Richard promised right on the front page of KS: “Multiplayer Online Game – which can also be played solo player / offline”

Your other complaints are your opinions and while I disagree, everyone is welcome to their own opinion. I’m just here to correct the factually inaccurate parts of your statements.

I am not sure why this game gets such a hard time .

The graphics are very dated, the sound is underwhelming (where are the voices?) the gameplay only barely resembles what was promised, and the fundraising methods were/are sketchy.

I find amusing how many people on a game they never play :) yea, we know, any game that isnt a wow clone must be hated cause you have to use your brain to play it, which leaves most of ya all haters incapable of playing, cause you cant beat it with a debit card like you can eve online

How did you afford all the straw for that massive strawman? Lol.

Once again, this is more focus on “fluff” than putting the time into what needs to be fixed: bugs, optimization and broken quests. The scariest part to me, is the fact that they don’t even focus on finishing the incomplete aspects of Episode 1, rather pushing Episode 2 in an effort to beg for more dollars in what I can only view as a digital ponzi scheme!

So glad I stayed away from this one.

JC I thought I was looking at a SWTOR article until after I clicked it, I feel foolish now as if Sacha Baron Cohen tricked me on his new show ;D

‘guys… please play our game. look, we know pop culture too. guys? remember we added a meteor too like fortnite! guys?’

FWIW, SOTA’s meteor thing has been going since March; Fortnite’s came after that. They’ve done the Star Wars stuff before too.

shhh, game is bad and they should feel bad.

I tried the trial . It didn’t seem as bad as you are making out .

The Daily Grind: What feels like a sufficiently interesting central MMO...