END_OF_DOCUMENT_TOKEN_TO_BE_REPLACED
Trove’s Geode expansion has been a game-changer – and I mean it in more ways than one.

The latest update/expansion to the colorful voxel-based game did indeed offer a major big change to the game as players knew it. Launched a month ago, Geode introduced not just a new zone but a whole new world filled with new NPC for Trovians to visit and work with. More than that, the entirety of the activities offered there are non-combat! That is quite a departure from how the game worked before (and how it still works in Trovian lands).

But that is only half the story: Geode is a game-changer for me personally. It drew me into the game. Despite all of the neat and fun things Trove had and did prior to this, I never felt a hook. Previously, I’d hop in to peek at new content or play through an event just to get a mount or ally, but that was it; once I had my new little friend, I’d leave. With Geode, however, I have been logging in regularly every week. Now I am a player, not just a visitor. Here’s how it hooked me.

The start of something new

Although it certainly wouldn’t be a long-term hook, the fact that my contributions added to the opening up of Geode definitely made me want to come back in and check it out once it launched. Before the update, there was an event where players were providing resources to build the boat that would sail them away to the new lands. I came in and did the event to get the cuddly critter at the end of the quest chain; however, I also wanted to see the fruits of my labors.That was a big draw to get me in once the critter-claiming event was done.

Of course the explorer part of me would want to see this new area, but surprisingly exploration has never been a Trove hook for me. Yes I like to see an area. That said, there is little to a Trove area to really explore; once you see the environment and the mobs in a general spot, you know what the rest looks like. I never felt like there are enough nooks and crannies to poke into, no real new and surprising things to really discover.

That changed with Geode.

Maybe because I love spelunking so much, having caves to explore enticed me the most — and keeps enticing me. That is definitely a part of it. I can’t explain my personal fascination with caves, but there you have it: Having caves makes me want to crawl through them. Don’t get me wrong, the Geodian hub is no slouch either. It has multiple areas to learn about (and learn I must because they are indeed useful) as well as wind elevators I get a kick out of using each and every time. As it’s a bit of a sky building, you have to know one of the very first things I did was jump off the edge to see what happened. What happened was me finding hidden little NPCs at the bottom (no, they don’t seem to do anything… yet) and a barrier that showed more land beyond. Ooo, that sure piqued my explorer’s interest! I can’t get out there yet, but I am looking forward to it. For now, I have the caves. 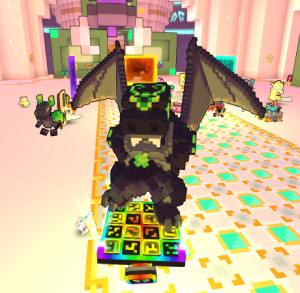 So back to the caves: There is more to their awesomeness besides the fact they are caves. After all, once you explore a cave a few times, there would be nothing new to draw you back, right? Well, there are things in place to keep things exciting — all without combat! That’s right, no combat. One reason I love exploring the caves is that I don’t have critters trying to kill me every few steps disrupting my exploration; it doesn’t feel as much like exploration if you have to keep pausing to fight. That doesn’t mean I can wander leisurely all willy-nilly however. There are dangers, such as exploding and shooting flowers that you dodge. The real thrill, however, is trying to beat the clock.

Admit it, adventuring can be dull if it is too chill and easy. The thrill factor of Geode comes in the fact that you have only a limited time to be in the caves. Trovians cannot breathe the toxic fumes in the caves, which get worse the deeper you go, so their breathing is assisted by the Geodian Acclimation System. The GAS meter dictates how long a player can remain in the cave network before being instantly returned to the hub. (This adds a whole progression layer as you upgrade your GAS device and other equipment to be able to delve into deeper tiers of caves to get more and different resources to craft even more and different things as well as upgrade your equipment… and so on.) When you only have so much time, you have to decide how you will use it. Are you just exploring? Are you gathering resources? Are you looking for companion eggs in lairs? Are you rescuing the poor Geodian cave critters? Racing the clock really adds a little intensity to the adventure. And since you can only get to the deeper tiers by running through each of the previous ones, time is definitely of the essence.

You might have caught that I mentioned rescuing cave critters is an activity. This is another hook Geode got into me. While mining resources is certainly a thing, you need lots to build things, but it isn’t the only thing to do in Geode’s caves. Instead of fighting the cave inhabitants, you help them. Using crafted blankets, food, and first aid kits you assist all those cold, hungry, and hurt creatures. The reward you with love for your heart and crystals for your bag. I have to tell you that I find it really hard to pass by these poor little things when I am in a rush to deeper tiers; it beaks my heart to see them in need. I just want to stop and aid them all! What a departure from normal MMO adventuring where you harm everything you run across. Coming to their aid instead is good for my soul. On a side note, you also tickle some creatures with your Omni-tool; I have no idea why some find getting zapped with what looks like electricity soothing, but they do. And they reward you with goodies for doing it! hey, who am I to judge how I help these little guys out. I am just driven to help. It is in my nature. So basically, Geode appeals to my base nature.

On the subject of critters, Geode offers a way to find and raise your own pets. As much as I love getting ally companions in all the events (why do you think I was logging in all that time before?!), the thrill of finding them yourself is pretty huge for me. I lair dive just for the chance of finding an egg! And I have to say, last night I finally found my first one, which has just has increased my appetite for finding more. I am not sure what it is yet (it takes 10 hours to hatch a bronze egg) but I can’t wait to meet my new little buddy. Now I need to find more buddies for him. One thing I understand for story reason — and frankly very much appreciate for the immersion level — is the fact you can call these cave pets only in the caves. Obviously it is because they can’t breathe and survive outside of that toxic-to-Trovians environment, but it makes me a little sad I can’t whip them out wherever I am, especially when I want to show one off to a friend! [Edit: I have just learned that you can actually use your Geode allies as skins on other pets so that you can show it off to friends in the main game!]

And that brings me to the one issue I have with Geode: the inability to meet up with friends. Yes, I can understand it as necessary for not circumventing the whole process of cave delving — like jumping to tier 5 without having to pass through tiers 1-4 — but it has made it annoying to get into the same instance as friends just to play. Sometimes we have had to specifically leave the caves and return to the hub and keep jumping back in order to get in the same one. I’d love if there were a way to allow players to join each other in the starting area of the caves only.

I could probably keep on going about Geode; there is more to it. There are neat new blocks I have been enjoying putting in my house. Yes, I am making my own wind elevator! I also have bubbles (but I need more!). Also I enjoy the grappling hook mechanics in the cave quite a bit. I am sure there is more to it all deeper down in the higher tiers of the caves that I haven’t seen, so I can’t say anything about it yet.

Geode was a game changer, giving me not only a reason to log in more but the earnest desire to log in and play. To keep playing. To play beyond just event lines that rewarded me with companions. I even go back and play the rest of the game more because I am there, and I have found other little fun things by doing so. I still may not be much of a fan of the blocky style, but I have discovered its charms. Geode definitely has its hooks in me.