Let’s be totally clear about something: There is no twist waiting for this World of Warcraft story. It doesn’t exist. There’s no way that this story moves into its next phase and suddenly all of the nonsense that was added here is made all right or acceptable or… well, let’s face it, not atrociously dumb.

I’m putting that front and center because if you’re going to talk about World of Warcraft at the moment, you’re going to talk about the latest Warbringers short and the concurrent in-game events, and that means talking about the fact that this is dumb. I’m also trying to leave people who really don’t want to be spoiled for awful storytelling not forced into it, so be fairly warned; things get spoil-y real quick down below. So if you want to read about how catastrophically stupid this is, read on. If you’d rather have any remaining faith in the expansion not being a steaming pile of wombat leavings destroyed by watching the cinematic in-game, well, maybe hold off.

First of all, let’s just review.

That is what we’re dealing with here. And it’s stupid. Literally every part of this is stupid. We’ve gone beyond an incredibly dumb plan and into the realm of just having a straight-up war crime on screen.

It’s not even a crime done for any reason. Pay careful attention to the framing and the pacing. This was not some rational and carefully considered plan; Sylvanas makes her decision to burn the tree only when she’s called out on her actions, then takes the time to force someone to watch. The framing, pacing, and everything is entirely unambiguous.

To be honest, this is even more staggering when you consider that the whole reason things are this bad is partly because we’re seeing them in this order. If Sylvanas were burning Teldrassil as retaliation – if Undercity had fallen first? It would seem more morally ambiguous. For that matter, there are dozens of ways to frame it to at least introduce some ambiguity.

“If you knew what I knew, little elf, you’d be thanking me for this.”

So let’s be clear, what’s going on here isn’t an accident or inevitable or unavoidable. The construction of Sylvanas as a petulant and transparent villain is a deliberate choice on the part of the writers. The version of this we’re seeing now is what the developers wanted, full stop.

“But Sylvanas has always been evil!”

The defense squad – there’s always a defense squad for WoW’s bad decisions, somehow – has been parroting this one pretty intensely over the past few days. Unfortunately, this mostly shows how little people are getting the upset. Because yes, Sylvanas has definitely always been evil… but this is also still out of character for Sylvanas.

Consider the taking of Gilneas. Yes, Sylvanas was perfectly willing to use the Blight to take out the city… after a protracted military conflict in which the Forsaken were taking significant losses. She was using it as a siege weapon to finish taking the city, based entirely on her actual end goal, which was securing her borders against an enemy based right alongside her nation. It was her final resort when her other plans had failed, and specifically meant to leave the city itself intact to be seized later.

Sylvanas is, in every prior portrayal, an exceedingly pragmatic woman. She has no interest in much beyond her current goal. Until Arthas was dead, it was destroying the Lich King; once he was gone, it was ensuring the survival of the Forsaken. It’s debatable how much that even changed when she became Warchief prior to this expansion’s storytelling; in Legion all she does as Warchief is head up a secret mission to help ensure the Forsaken can perpetuate themselves. She doesn’t even order any of the other parts of the Horde to help her.

That doesn’t mean she’s never engaged in evil acts or taken far too much glee in spreading death and decay. The problem here isn’t just that this is evil; it’s that this is evil with no purpose. It’s not shoring up her borders. It’s not taking out a personal enemy. It’s not helping the Forsaken. It’s not even helping the Horde; it’s encouraging the Alliance to counterattack. It’s evil just for the sake of evil.

My theory, honestly, is that this plot point was an original plan for Cataclysm that just got hastily thrown to Sylvanas because she’s the Warchief. And if you look at it that way, it makes perfect sense. This is exactly what Garrosh would want to do, especially since he was far more interested in getting bogged down in the struggle in Ashenvale and so forth. But simply swapping in Sylvanas because now she’s in charge doesn’t work at all. It winds up with a Sylvanas who isn’t acting anything like herself, and in the process drags the entire Horde into being a bunch of unambiguously evil monsters.

This isn’t morally grey. These actions (which, again, were deliberate) are the actions of clear and destructive evil, without any subtlety. It moves Sylvanas from being an obviously evil woman who is still a good leader and a loyal ally to undermining her existing character and ruining everything.

No twists in the wings

The other big thing that’s been put forth is that maybe there’s a big twist, that when you know everything it’ll all make sense. Even Chris Metzen got in on this, and let me offer in response to that a hearty “sod off, and that’s dumb.”

Let’s make something clear. If a story keeps requiring the writers to tell you “keep going, it’ll make sense later, you haven’t seen the whole thing,” what you have there is a bad story. Beyond even that, this is the same defense that was used leading up to this story, an assurance that once you saw why Teldrassil burned you’d see that it all made sense and was super cool.

Did that happen? No. The exact opposite did; people saw that it was still really dumb and called it out on that. So believing it this time is essentially saying “sure, the last time you said this would all pay off it didn’t do so at all, but I bet this time it’s totally on the level.”

Doesn’t really work, does it?

But even beyond that, there’s the simple reality that there is no twist that could justify this. There’s no way, from a storytelling perspective, that we could get a new bit of story that would “fix” this and make it something other than intensely stupid. 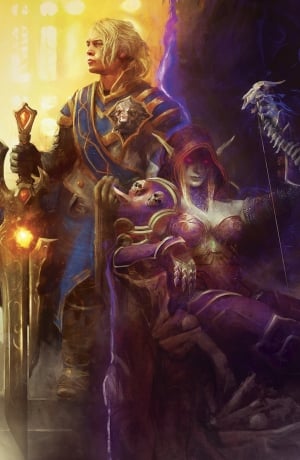 If we find out that Sylvanas is somehow under the control of the Old Gods with absolutely no prior warning or indication, it’s going to feel like a cop-out. It’s going to seem like the writers got backed into a corner and had to explain things away without having to kill Sylvanas, and it’s going to feel cheap and rather unsatisfying.

What if Sylvanas had some other motivation we found out about later? Like, she had to do this so that the Old Gods would know she was on to them or something? Equally unsatisfying. She still did something atrociously evil, but now she gets to bypass all of the consequences for those actions. It’s not supported by the framing of events, either, and it’s the same sort of trick that they tried (and failed) to pull off with Illidan in Legion.

And if we get to kill Sylvanas? Well, then she’s just being placed in the same position as Garrosh, doing a story arc we’ve already seen before, except falling victim to the universal law of diminishing returns (if something is cool the first time, it’s only going to be half as cool every subsequent time).

Or, of course, there’s the possibility that absolutely nothing will be done. Which leaves Horde players feeling like they’ve gone from a faction that can be evil to one that is definitely evil, Alliance players feeling as if they’re constant punching bags for the writers to victimize, and absolutely no one happy with the storytelling.

I’ve always felt like WoW requires you to take some bits from the story and polish them off while leaving the rest alone. It seems like that’s just the sort of methodology that the game encourages; you try to take what’s good and that’s got to be enough. But I find myself struggling to see what in the world we’re supposed to get out of this, and seeing the writers argue that we just need to see where it’s going ring particularly false.

We’ve seen where this is going. It’s here. And it’s stupid.

MultiVersus kicks off Season 1, announces Black Adam and a Gremlin...

Zenith announces integration with a haptics suit and releases its new...