If Blizzard was looking to manipulate the World of Warcraft community into caring about this MMO prior to the expansion launch later this month, then it’s mission accomplished. The story events of the past week, most notably with the Horde Warchief Sylvanas’ decision to burn down the Night Elf world tree, has riled up players like little we’ve seen in the past few years.

The backlash against the story beat is so strong, especially among Horde players, that a unique protest is spreading in the game itself. Inspired by the recent “Old Soldier” cinematic, in which the Orc leader Saurfang removes his shoulder armor in response to Sylvanas’ war crime, many players are emulating that fashion in-game. Considering how notoriously big and bulky World of Warcraft’s shoulder armor is, the lack of it is drawing attention from more than a few passers-by.

It’s a way for Horde players to show that they still have honor and don’t stand behind their current warchief’s actions. It’s also a not-so-subtle way of showing the community rallying behind a character that they clearly want to be the next warchief — and perhaps this was Blizzard’s plan all along.

Props to Blizzard for manipulating the emotions of a bunch of silly players. These same players are the ones who stand idly by as scores of NPCs and newbies alike are wiped (repeatedly) for no other reason than for ‘lulz’.

Don’t gimme this bullshit about ‘war crimes’. This is fucking World of WARCRAFT. War is in the damn title! There’s always been bullshit ever since the TBC expansion with Shattrath being a forced-safezone for both factions and then that trend continuing with Dalaran in the LK expansion. A nice easy way to not have to make a seperate city for each faction with every new expansion, yay! :P

This stupid meme is how I feel: 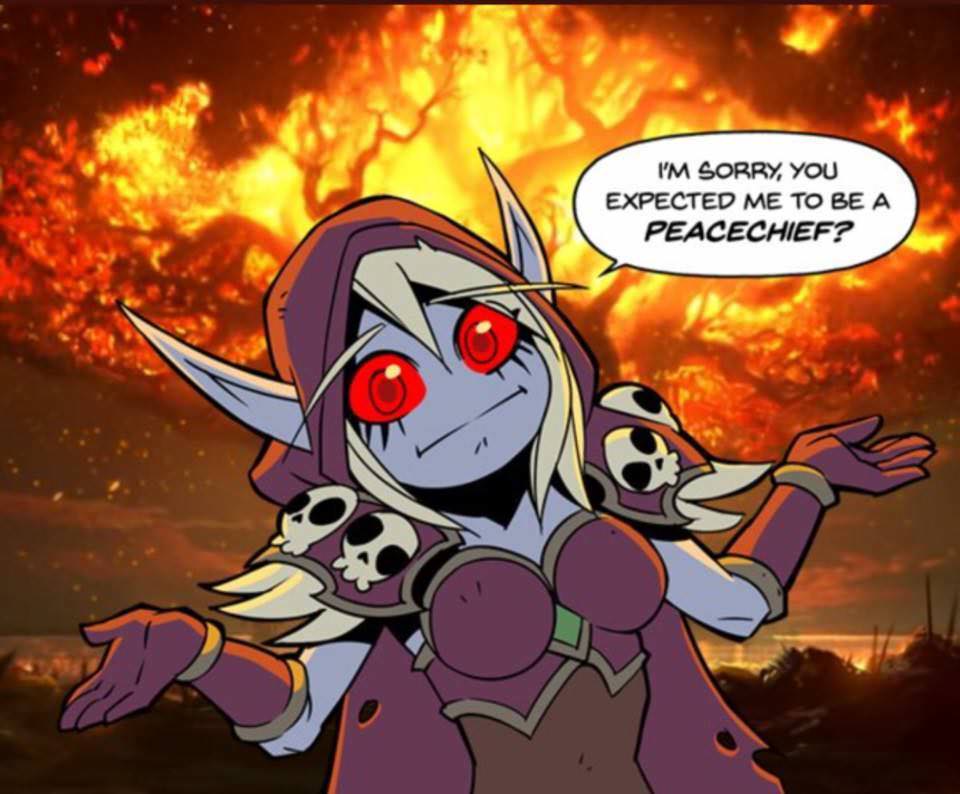 Ya’ll acting like this is some ACTUAL shit going down like it is Eve Online. Ya’ll been played and all it takes is Blizzard to make some stupid cinematic and have players eating out of their hands. Disgraceful.

I’m super-happy that stupid tree got burnt. Even happier that those stupid goofy-eared Night Elves got what they deserved. After DeathWing humped Stormwind to death, they just rebuilt it so maybe it is high time to give it a more permanent makeover, Horde style.

Though I was kinda hoping that the Gnomes would be wiped out. Like if that would happen in the lore (somehow) with maybe free race changes for those who are affected; that would get me to resub like now.

My pauldrons are on, Sylvanas is my Warchief.

I honestly didn’t know about the protest but then I didn’t play much over the weekend. I was trying FF14 again and playing my determined exterminators in Stellaris! Pixxni’s shoulders are almost as big as she is so taking them off should increase her movement speed! :P

In World of Warcraft Blizzard plays YOU. :D

What a delight. Such an outcry. However, “these violent delights have violent ends”. While for me now buying expansion much more tempting than before people are not pleased. I wonder if Blizzard know exactly what they are doing or they at last overstepped far enough.

Star Citizen, Star Citizen… Meh. That ain’t much of a hassle. This is.

Heh. I both care and equally don’t care about the pettiness of horde vs alliance these days. In fact I’d almost love it if Blizzard abolished the horde and alliance and went with Taliesin’s idea of choosing Light or Shadow/Void faction, so as to allow a mixture of races and so end the horde/alliance faction war. It’s so pointless these days. By the end of expac, we will be holding hands together fighting the old gods anyway. If they don’t at least give us that, that might actually be the final nail in the coffin for me.

I do however care about story. And to be perfectly honest, I’m just not impressed by the current story and very likely won’t be impressed by Kul Tiras stuff. It’s a real shame. I think after WoD I quit caring so much. In my opinion for all Cata offered, it equally lacked. MoP was a happy little apology from Blizz and then WoD came out and I’ve been stuck with just how incredibly bad it was. And, while Legion was one of the best expacs ever released in terms of game content, the awful story telling from WoD carried over and it’s extremely disappointing.

ah yes, the glorious alliance. where unique races are forced to give up their cultures to serve a bunch of all-white, blue eyed humans.

I’m sure your internment camps are full of sunshine and rainbows.

I’m just not paying them anymore. Companies only listen to money. If you want them to listen to you as the customer, stop paying that subscription. If enough people cancel, they will listen.

Not unique to WoW, just kinda made me realize that the ‘vote with your pocketbook’ is a bit oxymoronic. I also wonder at its efficacy. But *shrug*

The consumer has the real power in any open market. If they can come together, and agree on the same action, like not wearing shoulders in protest, they could also boycott a service.

If enough people cancel the sub, the company will jump into action, and actually listen for a change.

This is how unions work. The same logic can be applied to any service, including gaming as a service. Someone might need to start the WoW Players Union of Azeroth.

WoW has been cloned so many times now that it’s 16 years old if people are unhappy with the direction they are taking, all they have to do is move their business elsewhere.

If enough money is removed from their bottom line, they will take notice.

Human beings can’t come together to stop hating each other over skin color and religion. I certainly don’t think it’s going to happen over an MMO. Especially when MMO culture has been known to have some of the most vile offenders of the aforementioned.

That’s true; however, they have already become organized enough to start this should protest. Plus I already know of four accounts that have been dropped from subscription. I know four is a small number, but even a journey of a thousand steps begins with one.

This isn’t the kind of thing where a boycott could drive change. That’s for when the company does something evil itself, not for “the execution of your storytelling didn’t convey your intent and resonated with the audience poorly”.

This is the kind of thing where being passionate and making your feelings clear (in ways that fall short of harassment) is the best way to get Blizzard to think about the problems their players have and how to do better going forward. Because this is storytelling, a matter of artistic expression. Not a business decision. The most a boycott could do in this matter is cause the game’s budget for storytelling to get slashed, which would make things worse in the future.

It’s not just the storytelling. That is just the latest in disappointments.

They’re asking for the same price in the expansion as a full new title. They require a monthly subscription, they also have a cash shop online selling in-game items. They’re triple dipping the customer. This piss-poor storytelling is just the icing on the cake for taking advantage of their loyal fanbase.

Who do they think they are, Apple?!

The time has come to make the greedy corp listen for a change.

I don’t care about Saurfang being a warchief. A pathetic old fart who’s best idea to solve the situation is to get himself killed or get imprisoned by the Alliance does not deserve the honor.

What I wanted is for these incompetent writer twerps to actually write Sylvanas as a competent warchief, consistent with her characterization up to this ridiculously forced plot. Not just because I’m not looking forward to Sylvanas the Raid Boss. Because her portrayal right now insults Vol’jin, his memory and his choice. It insults the leader of every horde faction railroaded along with this stupidity.