Sometimes it feels like forever before the next expansion comes — even when it’s regular every year! That’s what this year has been like while waiting for EverQuest II’s 2018 expansion. But now it might almost feel too close: With Chaos Descending on the horizon, that leaves only so much time to participate in the expansion prelude event! A bit disappointingly, there isn’t much to it except grinding. It is not a complicated event (the quest itself is pretty darn short!), but it will take time if you want to gather enough of the event currency to buy the many new items available on the event merchant.

END_OF_DOCUMENT_TOKEN_TO_BE_REPLACED
So here’s a guide to help you get through Against the Elements so you can buy everything you want before time runs out. Although we don’t have an exact date, once the expansion hits in November the prelude event is slated to end; so while you’ll get to enjoy the new content, you’ll lose out on the opportunity to nab the event goodies! 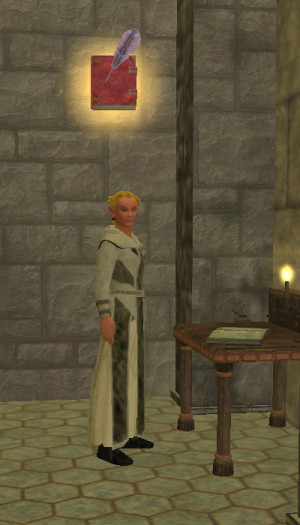 The prelude quest is really pretty simple and can be done by every character regardless of level. That means all your alts can participate! You just find and speak to a Concordium Pupil Adept (if you are Qeynos-aligned), or an Arcane Science Apprentice (if Freeport-aligned). The trick is finding one because they are all out and about witnessing phenomena instead of hanging out in the city. The good news is, you can still hail a guard and ask! Of course, if you didn’t know the names of the NPCs it wouldn’t work anyways, so good thing you know now! I used simply “adept” in the guard’s search field in Antonica and was promptly pointed to the location, but trying “apprentice” in Gorowyn led me to a different NPC. Of course, you can skip this step and just use this guide to hustle to the spot yourself.

After speaking to this pupil you can accept the quest named either Against the Elements For Qeynos. Head to the Concordium Mage Tower in South Qeynos, Qeynos Capitol District, and hop into the red portal (right of the door when entering). Then speak to Librarian Elol down the stairs and on the left (721, 41, 102). He’ll ask you to go find one of those elementals and bring back a sample.

Freeport friends can find an apprentice in the Common Lands going toward the docks from the city gate (-1194, -53, -419) or in Darklight Woods along the road once you leave Neriak (-506, -54, 138). There is also an apprentice near the Chrykori Village Station griffon in Timorous Deep, but that is pretty out of the way unless you happen to be there already.

The apprentice offers the quest Against the Elements for Freeport, which immediately sends you to North Freeport to the Academy of Arcane Science to deliver his report to Librarian Jasozi (11, -38, -109). He then sends you right out to get a sample from the elementals.

Regardless of your starting city, once you have the task to get the sample, you must head out to a level-appropriate zone to find an elemental to fight. These mobs are available in 33 zones, so you’ll find what you need in your regular or preferred hunting zone. Make sure the mob cons green or above! You can wander to find the zone, use a scout to track, or go to EQ2 Wikia to find the exact waypoints for possible spawn locations.

Once you find your elemental, kill the little elemental circling the elemental tempest, then kill each successive one it spawns. There are multiple elemental types, which becomes important later. The fifth and final elemental is a larger version, and after it dies the tempest becomes aggressive; defeating it grants the elemental storm shred. Now you can travel back to your respective NPC in the city to turn in the shred and receive your reward. Note: If you are close to level 110, you may want to wait and turn it in until after you level as the Ancient Scroll Crate reward is apparently only available for that level. If you do that, you can then farm currency on an alt. The good news is if you reach 110 before the event ends, you can buy Ancient Spell Scrolls for free from the event merchant as well.

Once you turn the quest in you can collect “more” samples, which is the merchant currency. This time, however, you are able to hunt the elementals as grey mobs or when mentored and still collect the elemental storm shreds needed to buy from the merchant. This means you can go to any zone as well as help out lower-level friends. It appears to drop every time, and if grouped everyone gets one. Of course, All-access members will get double the reward, so two for every tempest kill. 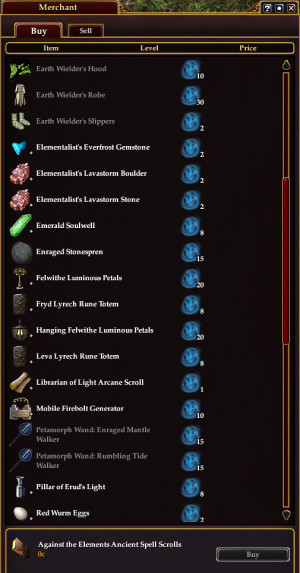 Now, for the only reason to grind! What’s an event without some loot? When you complete the quest on each character, you get the title Elemental Assailant, some cash, and an Ancient Scroll Case (the final one only if you are level 110 or higher). You also get to choose one of the following housing decorations: Arcane Rune Cube, Bowl of Umbrite, Elementalist’s Everfrost Gemstone, Elementalist’s Lavastorm Boulder, or Red Wurm Eggs. If you want one or more of all the items, just do the quest on multiple alts. Then you can just farm the elemental storm shreds on your favorite character.

After killing many elementals and stocking up on the shreds (which are heirloom so can be traded between alts on your account), head to the merchants Mage Fulcrum Gearshift in South Qeynos (706, -19, 170) and Scientist Dally Scrumplecog in Freeport (-10, -8, -89) to buy up the event goodies you want before they disappear. Housing items range in price from one shred to 20, so depending on how much you want you may not have to farm too terribly long  — meaning if you are starting now you have plenty of time! The appearance clothing sets, called Earth Wielder’s and Water Wielder’s, cost two to 30 per piece. The most expensive item at 80 elemental storm shreds is the Building on Sundered Ground recipe book from 2015’s event; it grants the ability to make special building blocks. For a look at the items available, check out the images on EQ2 Traders.

And last, but certainly not least, while fighting the elementals, be sure to loot them even if they are grey! They randomly drop special elemental collectables for the new event collection quest, Raging Elemental Scintilla. There are 12 different collectibles to complete it. When done, you get to turn it in for your very own enraged mantle walker plushie, the fiery stone elemental.