Since beginning my Elite Dangerous journey, I’ve been impressed and delighted to find many community-supported tools available to aid Elite players in navigating the large, complex world of our future galaxy. One might argue that the necessity for such outside resources points to deficiencies in the game, and that is partially true, but the talent and passion that these players/creators pour into the simulated Elite world is nevertheless admirable.

In fact, some of these tools have become so integrated into the experience that their absence would seriously affect gameplay. For this edition of our Stick and Rudder column on MOP, I’ve compiled a list of the most essential, and some non-essential, out-of-game resources used by the Elite Dangerous community.

It wouldn’t be too difficult to dedicate an entire post to Inara. Inara is a massive database of Elite Dangerous systems, stations, commodities, materials traders, engineers, and pretty much anything else anybody would want to keep track of in the game. It’s quite possibly the most comprehensive game database I’ve ever encountered, to the point that it’s hard to imagine how difficult it would be to play the game without it.

I use Inara when trying to find where to purchase or trade a specific resource or material, or when I want to buy a specific module for my ship. Without it, Elite would be a game filled with hopeful jumps to random systems. Inara provides players with an API key, so players who are so inclined can install a client that will run in the background and automatically update the Inara database as they play the game. The API key is also useful in updating Inara with a player’s current in-game location, providing quicker access to information on systems that are nearby.

The Elite Dangerous Star Map (EDSM) is like Inara in that it keeps track of systems and depends on player input for updates, but this one is designed for explorers of the Elite galaxy. EDSM includes, quite literally, a map of the galaxy and a player’s current location within it. I find it more useful for keeping track of my routes and discoveries when I’m out exploring the black of space.

Because only a fraction of the Elite Dangerous galaxy has been visited by players, EDSM is constantly being updated with new information on stars, planets, and systems. Players who are into exploration are most likely also interested in data, and EDSM has plenty to spare. As an example, EDSM can tell me that I have been the first player to discover no less than 308 different star systems.

EDSM also has achievement badges for players looking for extra motivation and goals. Possibly the most interesting feature on EDSM for explorers who want to stay together out in the depths is a page that lists upcoming expeditions, groups of players out exploring together for months, or even years, at a time. 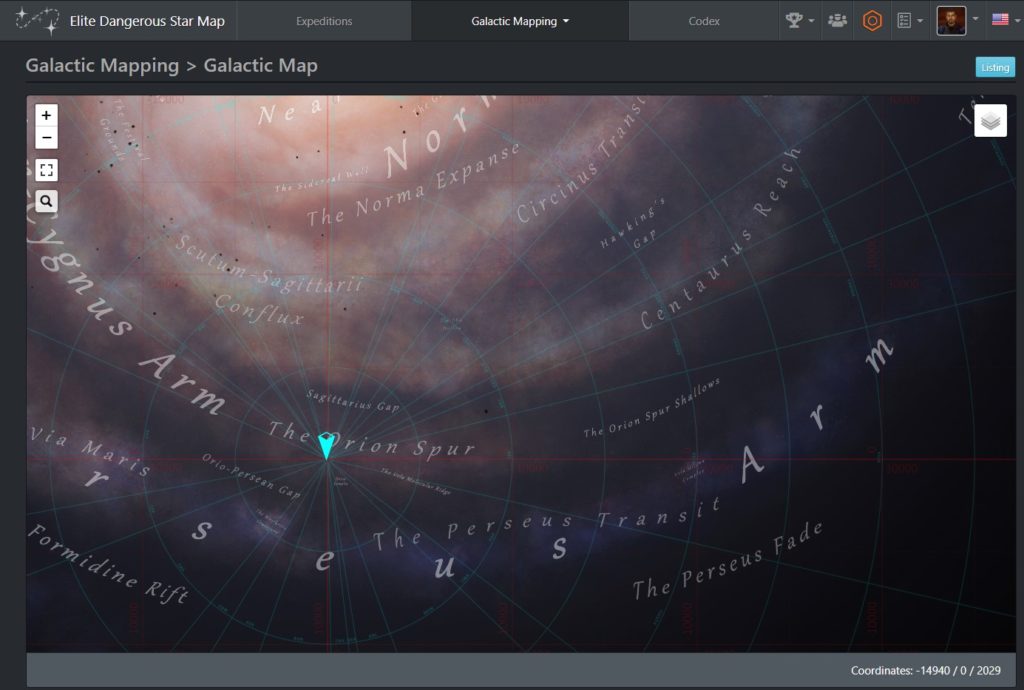 One of my favorite activities in Elite Dangerous is shipbuilding. A variety of ships are available for in-game purchase, from budget-friendly to extravagant, each with strengths and weaknesses. But coming up with a configuration within the game is not an easy thing to do, considering that certain ships and modules are only available at specific stations. Outfitting a ship is somewhat of a balancing act since weight can affect jump range, modules can affect power draw, weapons can affect heat generation – you get the idea.

Enter Coriolis, a one-stop-ship for trying out different Elite ship configurations. Coriolis looks daunting at first, but the flexibility of the tool is unmatched. Players can mix and match core internal, optional internal, hardpoints, and utility points modules in both stock and engineered states. Additionally, the amount of fuel and amount of cargo can be adjusted to compare how different ship weights affect the jump range. Want to play around with a ship you already own in Elite? No problem! Existing ship configurations can be imported using a client tool and API connection.

Does Elite Dangerous need another database? Of course, it does! The Elite Dangerous Database (EDDB) is another tool that captures a lot of the same information that Inara does, and it also uses a client API to keep its data on the galaxy up to date. But the EDDB does have one distinguishing feature: a tool that plans out buy/sell trade routes for players who want to jump from station to station buying low and selling high.

Is there any other reason to use EDDB over Inara or another system database? Personal preference only. Inara is so huge and flexible that at times the information on the screen can be overwhelming. When you want something more streamlined, that’s where EDDB shines. 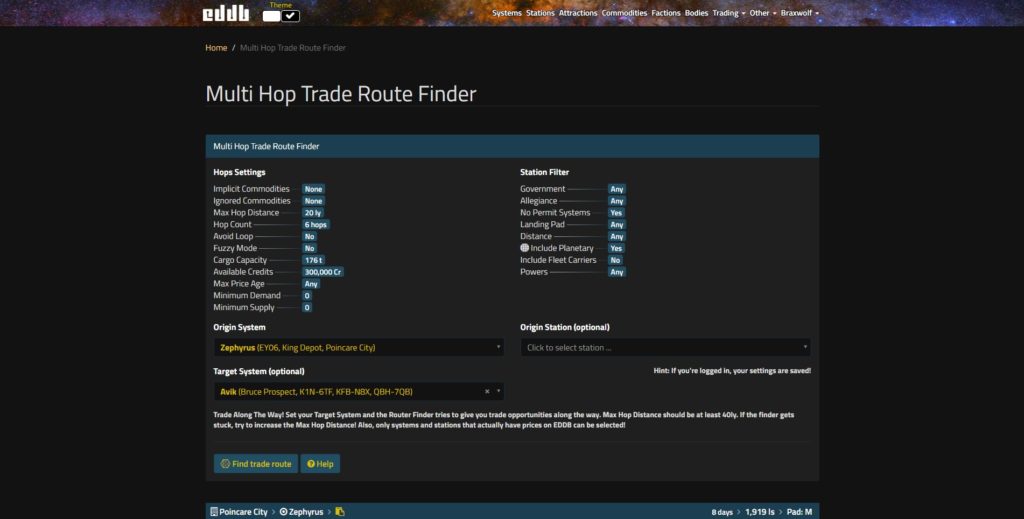 One gripe I have about shipbuilding in Elite Dangerous is that the views of your ship available in the outfitting shipyard are limited. In fact, when placing weapons into your hardpoint slots, it’s fairly difficult to determine where on the ship those weapons are being placed. Every ship has different hardpoint arrangements, and the zoomed-in view of the missile or cannon being purchased gives little context to where that hardpoint is located.

Elite Dangerous Ship Anatomy is a slick little site that shows a blueprint-lite view of every ship in the game, including the location of such things as cargo scoops, landing gear, and hardpoints. I really like this site because it’s so clean and intuitive. One thing I notice, though, is that it does not have a security certificate in place, which I hope is soon remedied. If not, future browser security features may block it entirely. 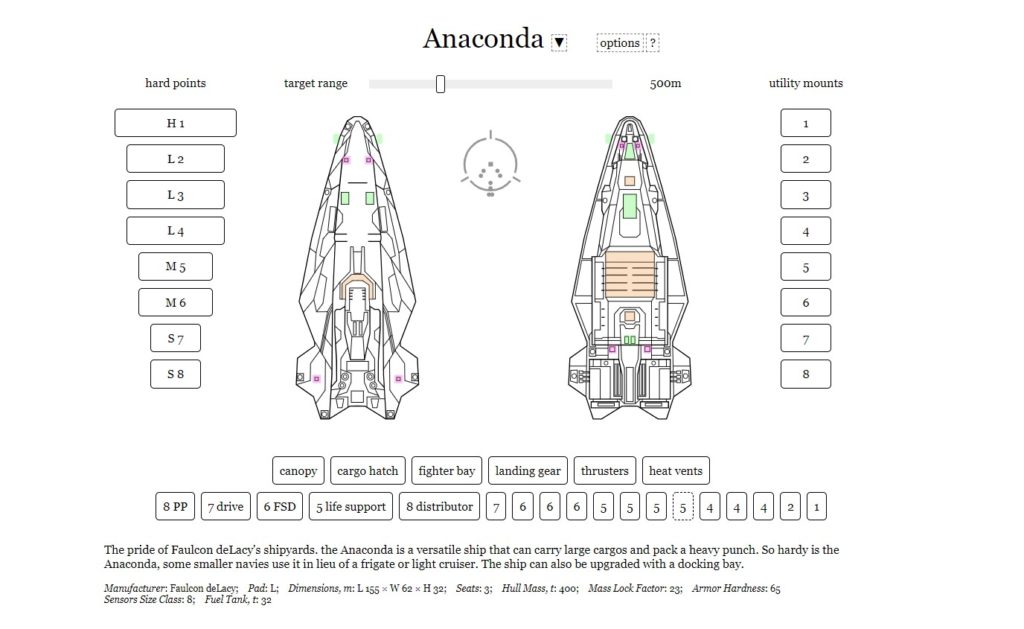 Voiceattack is an incredible voice recognition tool but will set you back a cool $10 US. But if you ask me, it’s worth every penny. Voiceattack is a client application with a selectable Elite Dangerous profile already built-in, so players don’t have to spend hours configuring each and every command. I originally bought the software because I was having difficulty remembering all of the keyboard shortcuts, but I have since found that mixing physical maneuvering with computer voice commands is just a good time.

Granted, you’ll need some kind of microphone or headset for the voice commands to function, and the voice recognition uses the built-in capabilities of Windows 10, so some amount of voice training is advisable. If you’re feeling lonely in the cockpit, you can also buy voice packs from HCS featuring voiceover work from the likes of William Shatner, Michael Dorn, Marina Sirtis, and Brent Spiner, among others.

The final website on the list is not a tool per se but a handy little immersion-enhancer. Radio Sidewinder is a streaming radio station maintained by one of the in-game squadrons. They play a selection of ambient spacey music and techno beats, broken up by in-universe advertisements and actual Galnet news updates. I was delighted to find this player-run station while on my first exploration trip, as it made me feel as if I was still connected to all of the happenings and bustle of the Elite universe, albeit at a distance. While some of the commercials are completely fabricated (but lore-friendly), others have been placed by squadrons as a recruiting tool or to let players know about services provided. Radio Sidewinder accepts advertising submissions (for free if it’s Elite content) from anybody and is also playable via an Amazon Echo app.

The world of Elite Dangerous is vast, and as it turns out, so is the landscape of player-managed tools designed to enhance the game. I’m interested in what tools MOP readers use that I may have overlooked. Let me know if I missed one that you can’t play without!

The Daily Grind: What’s the most heroic moment you’ve seen in...