Turns out that Ingress Prime wasn’t the only fun thing Niantic was plotting for November: The studio best known for Pokemon Go also announced this week that its Harry Potter MMOARG, Wizards Unite, is definitely launching next year, and in fact, you can finally sign up for… well, I suppose we don’t entirely know what we’re signing up for, but we’re enlisting! For something! Maybe it’s the alpha or beta! Maybe it’s advertising! Probably both!

“Please resist the urge to panic. Traces of magic are appearing across the Muggle world without warning and in a rather chaotic manner. We worry it is only a matter of time before even the most incurious Muggles catch wind of it. We call on all witches and wizards to help contain the Calamity or risk the worst of times since You Know Who. Brush up on your spells, get your wand ready, and enlist immediately.”

First announced a year ago, the game is expected to allow players to “explore real-world neighbourhoods and cities to discover mysterious artifacts, learn to cast spells, and encounter legendary beasts and iconic characters along the way,” all while taking advantage of the absurdly popular Wizarding World franchise. Check out the new trailer!

Niantic isn’t ready quite yet to talk about Harry Potter: Wizards Unite 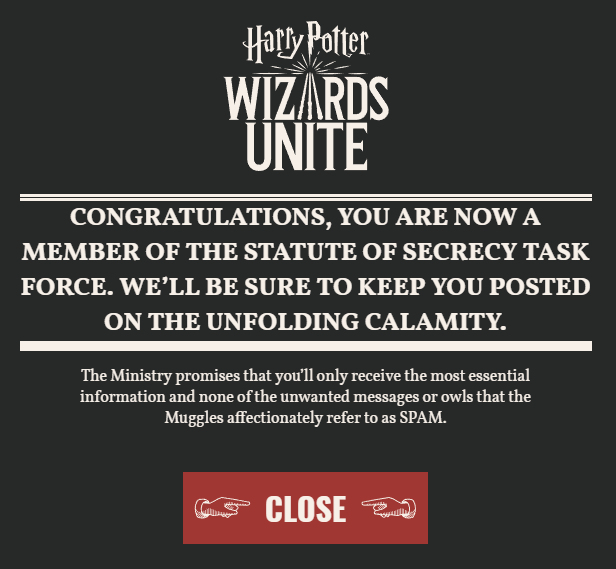 After watching the new Fantastic Beast film last night, I think my enthusiasm for this franchise is deteriorating.
Which is depressing as I used to love it.

This was such a weird email. I had no idea what it was advertising. I assumed it was a game but I couldn’t find any reference to a game in the email…