I try to be as authentic as I can be. I believe it makes me more trustworthy as a reporter and reviewer. When a studio presents me with a piece of hype, I try to avoid it. I try not to make a big deal because I know it’s just another way for a studio to advertise its next big thing. And if history is any indication of the future, the more hype placed on a property or project, the worse the product will be. Large studios with big budgets have the money to polish their turds with a lot of shine, after all.

END_OF_DOCUMENT_TOKEN_TO_BE_REPLACED
But here we have a possible exception. I’m probably going to end up hating myself for this, but let’s talk about the latest piece of promotional material I received from ZeniMax Online Studios, without the influence of spoilers from datamining. I’m almost embarrassed to admit it, but it’s got me genuinely excited about what’s coming next for Elder Scrolls Online. Congratulations, ZOS, you win this time! 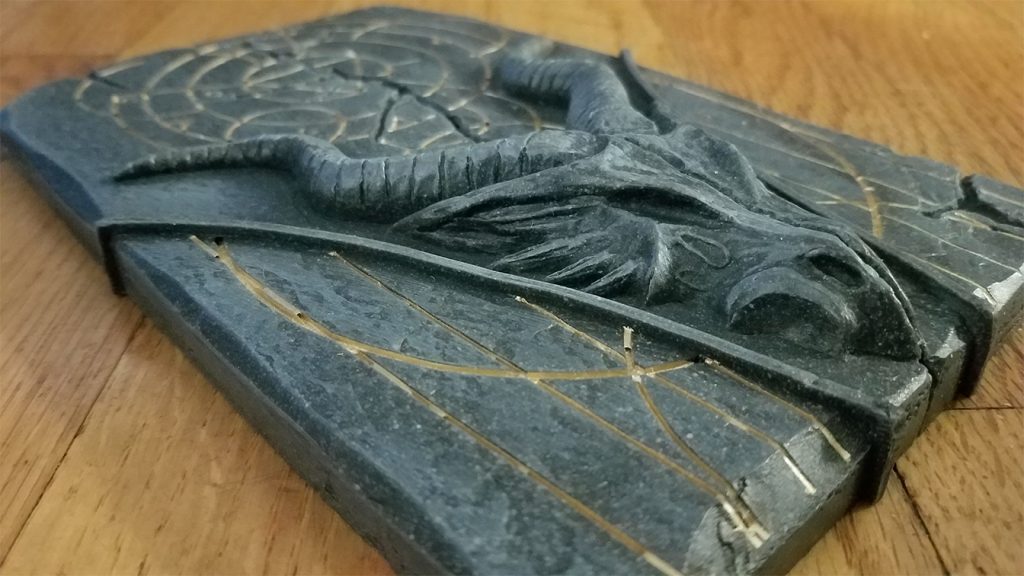 If you saw my tweet on Tuesday night, then you can see the first image I took of the item I received in the mail, but I’m not sure that accurately describes what it looks and feels like. I’m not sure that it’s all important to surmise what it means, but I would like your help putting the pieces together. And I’m not saying that just because the swag is a broken tablet. 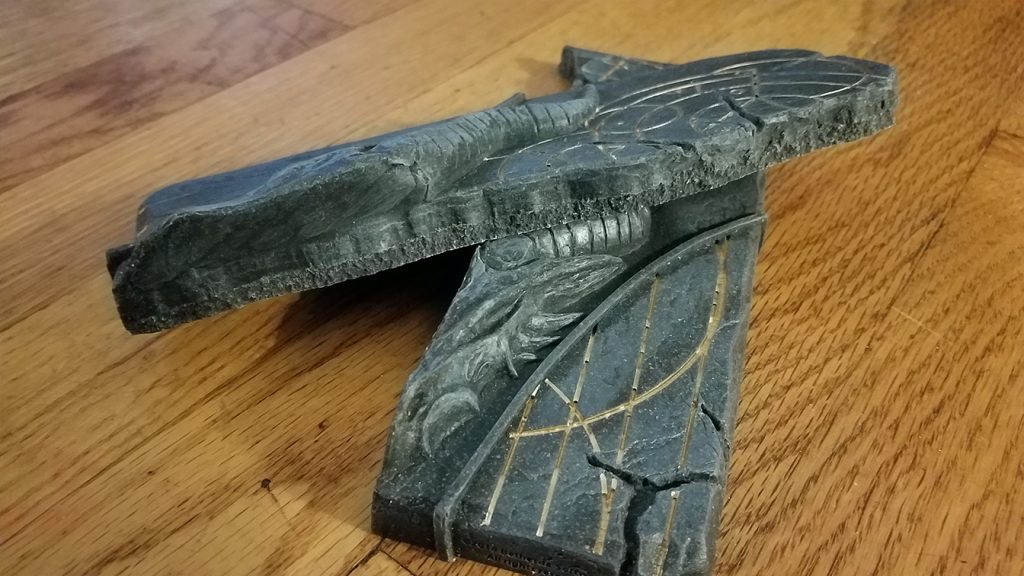 The item is mostly grey with gold lines etched into its surface. It measures 5.25 inches (13.3 cm) wide and 8 inches (20.32 cm) tall. On average, it’s a half an inch (12 mm) thick and an inch (26 mm) at its thickest, around the dragon’s head. It’s made from a heavy material, probably plaster, but painted to resemble stone. Although the top side is likely made from a mold, the bottom part is made from a solid piece that’s actually been broken because it fits together nearly perfectly, like a broken coffee mug. The package also included a letter from Abnur Tharn that I will get into later. 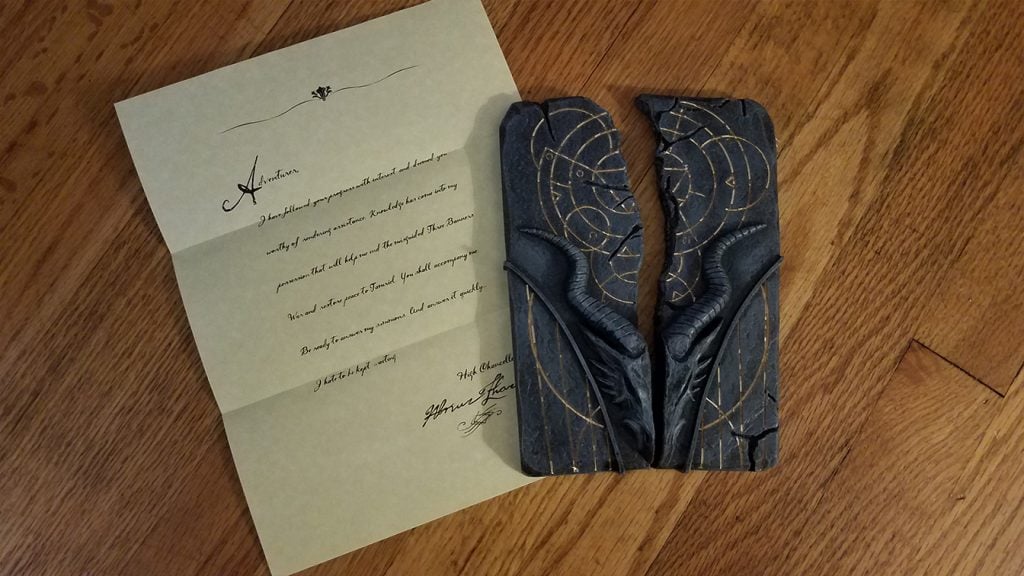 The design on the tablet is exactly what you see in the images. The focal point is the dragon head, which has been broken in half with the rest of the tablet. When fitted together, the dragon’s head almost looks like a goat’s head like you’d see in occultic iconography, but the fins flaring from just below the eye socket to and the large, flared nostrils indicate that this is not an earthly creature.

This isn’t the first promotional material I’ve received from ESO. I’ve also received a coin or the Morrowind chapter and the Summerset chapter. There was also a leatherbound (probably faux leather) book with Summerset stories and journals. Of course, I found those things fun, but they have never been interesting enough where I felt I just had to write about them. But this tablet is different. It’s like a puzzle waiting to be solved. 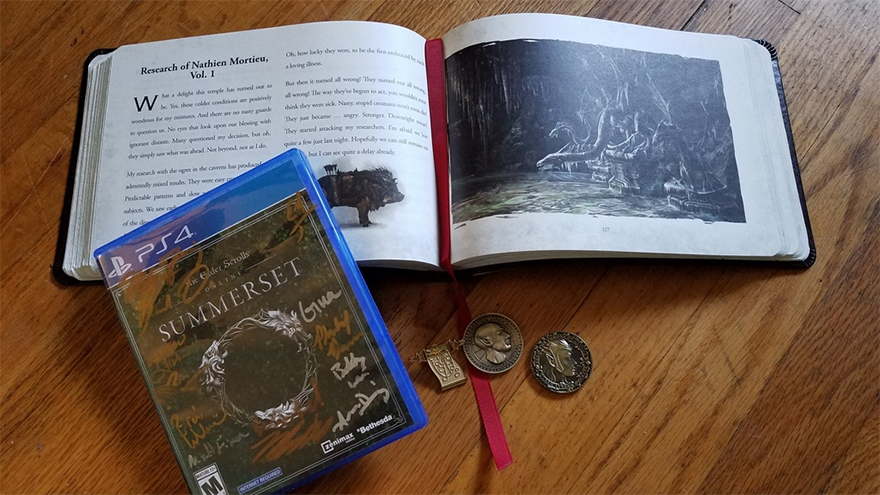 I don’t believe that I’ve found all the pieces to the puzzle, but I believe that I have found enough to start forming a picture. And for fun, let’s try to put it together.

The first piece of the puzzle has to do with the reason behind my disclosure. Those other tiny pieces of swag always preceded or coincided with an announcement of a chapter. The first was obviously Morrowind and the second was Summerset. So we can assume that ESO is about to announce a new chapter, which we already knew, given that this past weekend ZeniMax straight-up announced the announcement. But for the rest of the clues, we will have to look to the letter that came with the tablet and the tablet itself.

I have followed your progress with interest and deemed you
worthy of rendering assistance. Knowledge has come into my
possession that will help me end the misguided Three Banners
War and restore peace to Tamriel. You shall accompany me.
Be ready to answer my summons. And answer it quickly…
I hate to be kept waiting. 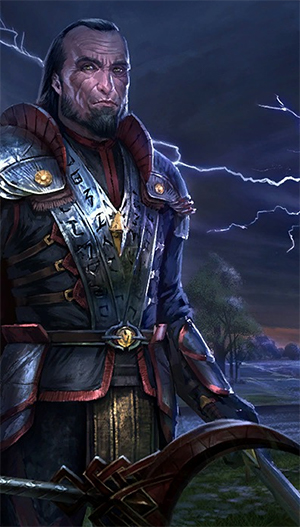 Although I don’t see any clues in the way it was written, I left the paragraph breaks the way they are on the page just in case you see something that I don’t.

The letter is written by Abnur Tharn, who is the Imperial High Chancellor and one of the five companions from original storyline revolving around Mannimarco and the Daedric Prince Molag Bal. After the events of the with Molag Bal, Tharn fled with the Amulet of Kings, a relic of Akatosh to the Imperial City in an attempt to restore its power.

I have to turn to Twitter for a bit of information about the tablet itself. Yesterday, the official account for ESO called the tablet a Wrathstone. Unfortunately, that tells us very little. Wrathstones are not really a thing in Elder Scrolls. But the symbols on the stone might mean something.

As I mentioned in the description, there is a sculpted dragon’s head on the tablet. And anyone who has played Skyrim (which I think is everyone at this point) knows that the dragon is the aspect of Akatosh.

There is that Aedric name again. Let’s follow that thread. If the tablet has something to do with Akatosh, then why is it broken? My guess: a Dragon Break. These are moments in time of great importance where linear time is broken. It’s called a Dragon Break because Akatosh is the god of time, and if the timeline is broken, the “dragon” is broken.

If I put all of these clues together and assume that the Khajiit in the teaser trailer was significant, then I have one answer to all of it. Tharn believes that the only answer to ending the Three Banners War is to find the Wrathstone of Akatosh calling on him or his power to reverse time so that the war doesn’t happen. Of course, it’s Elder Scrolls, so it’s bound to go wrong, so you will have to travel to Elsweyr to right the Dragon Break that Tharn helped create.

I’m kidding. What did I miss? Where was I wrong? Do you have other theories about these clues? Does the datamining we already know about change your opinion or this analysis? Let me know your answer in the comments below.