In the real world, I am not a cat person. Actually, I’m not a pet person. But in video games, I collect minipets, tame as many creature mounts as I can, and of course, play a creature handler as often as possible. Consequently, the Warden is my second favorite class to play in Elder Scrolls Online. I made a gif of Dro-m’Athra Senche mount that exploded on Twitter. And my favorite mini pet is my Senche-Panther.

END_OF_DOCUMENT_TOKEN_TO_BE_REPLACED
Wait. Wait. “Those are just cats, right? Those aren’t Khajiit, are they?” you might ask. In Tamriel, you will actually find 17 different “breeds” of Khajiit, and some of them resemble other types of creatures in Tamriel, which make things extremely confusing. With our trip to Elsweyr coming in June, we should probably familiarize ourselves with the different types of Khajiit and what separates them from other felines.

Phases of the moons

The breed or furstock of a Khajiit is based on the phases of Nirn’s two moons, Masser and Secunda. At some point I should probably explore how this is scientifically possible, but for now, we will just accept that it’s a kind of magic. A good chunk of information regarding the Khajiit breeds isn’t found in any Elder Scrolls game but in an in-character interview conducted by The Imperial Library with Jobasha, owner of Jobasha’s Rare Books. (I believe that this “interview” was conducted in-character because it allows for some exaggeration and perspective bias. To be honest, I wish more games developers would conduct interviews this way.)

Back to the subject at hand: If a Khajiit is born when Masser is full, the Khajiit will be quadrupedal and large. When Masser is in the new moon phase, small bipedal Khajiit are born. The waning and waxing of Masser give us everything in between. The phases of Secunda determine how bestial the Khajiit appears. Despite the Khajiit’s appearance, though, all are intelligent and sapient. 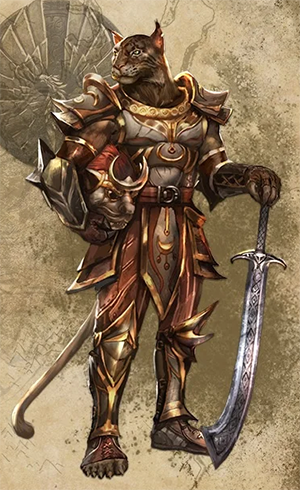 Although there can be exceptions, the player-character breed of Khajiit in ESO is the Cathay or Cathay-Raht. This species is born during the Waxing of Masser and the full moon of Secunda or the waxing moon of Secunda. They look like what most people would imagine feline-humans to look like. They have a very human-shaped form with a feline head and tail. They speak like men and mer, and for the most part, integrate well within other societies. Cathay-Raht are bulkier and slightly taller than the Cathay, but otherwise they appear the same.

Some roleplayers in ESO will likely consider their Khajiit Suthay or Suthay-Raht. As another roleplayer, I’d accept that because the physical differences between a Cathay and a Suthay are minor. As a rule, Suthay are shorter than Cathay. But the biggest difference is the digitigrade legs. Cathay legs are plantigrade, like human legs, but Suthay legs have a shorter femur and a longer metatarsus (foot bone). These breeds are born in the new-moon phase of Masser and the new-moon and waning phases of Secunda

The last playable breed of Khajiit are the Ohmes. Just like the other breeds, there are Ohmes and Ohmes-Raht, but from a man-or-mer perspective, these two breeds have the largest distinctions. Ohmes are the Khajiit breed seen in Elder Scrolls Arena. This breed was likely birthed from a retcon (retroactive continuity). In the games after Arena, the Khajiit appear much more feline. Ohmes look very similar to Bosmer: Their ears sit lower and they have very little fur, and of course, they have no tail. Roleplayers could even use a Bosmer character model to say they are Khajiit. The Ohmes-Raht have a similar physique to an Ohmes, but the ears are set on top of the head, and of course, this one has a tail. The Ohmes and Ohmes-Raht are born during the new moon of Masser and full- and waxing- phases of Secunda. 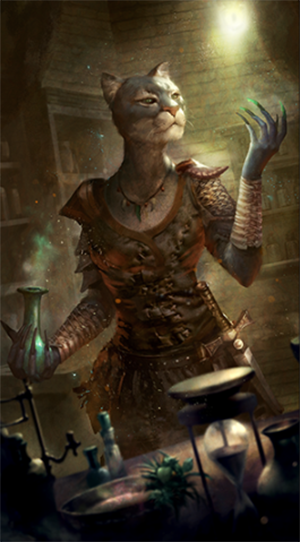 Now we start to get weird. During the waxing of Masser and the new moon of Secunda, Tojay are born, and the Tojay-Raht are born during the waning of Secunda. The Tojay breeds are bipedal because that’s what their moon phase indicates, but other than that we don’t know anything about them. In unofficial art, they have been depicted as being about the size of a bobcat if it stood on its hind legs. We can assume they are wilder than Cathay, but there is nothing in lore that says what they are. Maybe when we explore the Tenmar Forest in Elsweyr, we will find out.

The Dagi and Dagi-Raht live in similar mystery as the Tojay. There just isn’t a lot written about them. According to the Masser waning moon phase, they should be quadrupedal, but the stories of the Dagi would indicate that maybe they aren’t. In a book in Morrowind, Oblivion, and Skyrim called Mixed Unit Tactics in the Five Years War, there is a story of Dagi attacking a group of Bosmer. They cast spells of silence and fire. That’s all we know for now. I imagine that situation was similar to when the lion opened the car door:

The book of Mixed Unit Tactics also mentions the Alfiq: “One of the surviving Bosmer told me that he saw a few ordinary cats among the Dagi and even claimed that these ordinary cats are known as ‘Alfiq’ and that they were the spellcasters, but Bosmer are almost as unreliable as the Khajiit when it comes to the truth, and I cannot believe that a housecat can cast spells.” That sums up the Khajiit born during the waning phase of Masser and full moon of Secunda.

The Pahmar and the Senche are the most common quadrupeds in ESO and all are born during the full-phase of Masser. There have been depictions of Pahmar and Pahmar-Raht as bipeds, but it’s clear that they shouldn’t be. And there has been a question if the Senche mounts in ESO were actual Khajiit. Loremaster Lawrence Schick, who recently retired from ZeniMax, wrote as Moon Bishop Hulan in February of 2015:

“Many hairless ones are confused by the term ‘senche,’ since we Khajiit use it to mean a variety of things. It is used as ‘senche’ and ‘senche-raht’ to refer to two of the seventeen distinct furstocks, or ‘breeds,’ of Khajiit. The senche-raht, in fact, are the largest of us! But we also use the term ‘senche-tiger’ to refer to our more catlike cousins of lesser sentience. Indeed, depending upon the appearance of these cousins, we might even call them ‘senche-leopards’ or ‘senche-panthers.’ So you see that the term ‘senche’ is very flexible indeed, as changeable as the Moons.”

So are Senche mounts the Khajiit breeds? I’d say yes unless it’s a senche-panther or senche-lion.

Well, I learned something today, and perhaps you did, too. You might also notice that there are only 16 breeds listed when I said 17. Well, the last one is the Mane. This breed is born during the rare Third Moon phase. And according to the lore, there is only one of them at a time. It would be very interesting to see what happens to the living Mane when another Mane is born.

I’m also very interested in how this all fits into Elsweyr and the dragon story, but that’s an article for another day. Let me know your thoughts in the comments below.