Like the PC version, this edition of the game is buy-to-play, with the basic version set at $9.99, though if you want to splash out for more cosmetics, currency, and premium sub time (the ultimate edition even has a tier 5 horse), you’ll be plunking down up to $99.99 total.

END_OF_DOCUMENT_TOKEN_TO_BE_REPLACED
As we’ve previously covered, nearly a third of a million people participated in the Xbox One’s beta, and it looks like the cadence for content is going to be quick indeed: According to a snap lifted from last week’s dev stream, the team is planning on rolling out Mediah, Valencia, and Kamasylvia just in the next four months, content that took five times as long to roll out to PC players in the west. At that pace, it won’t be long until the games are brought to parity, which does seem to be the goal. Enjoy the brand-new trailer! 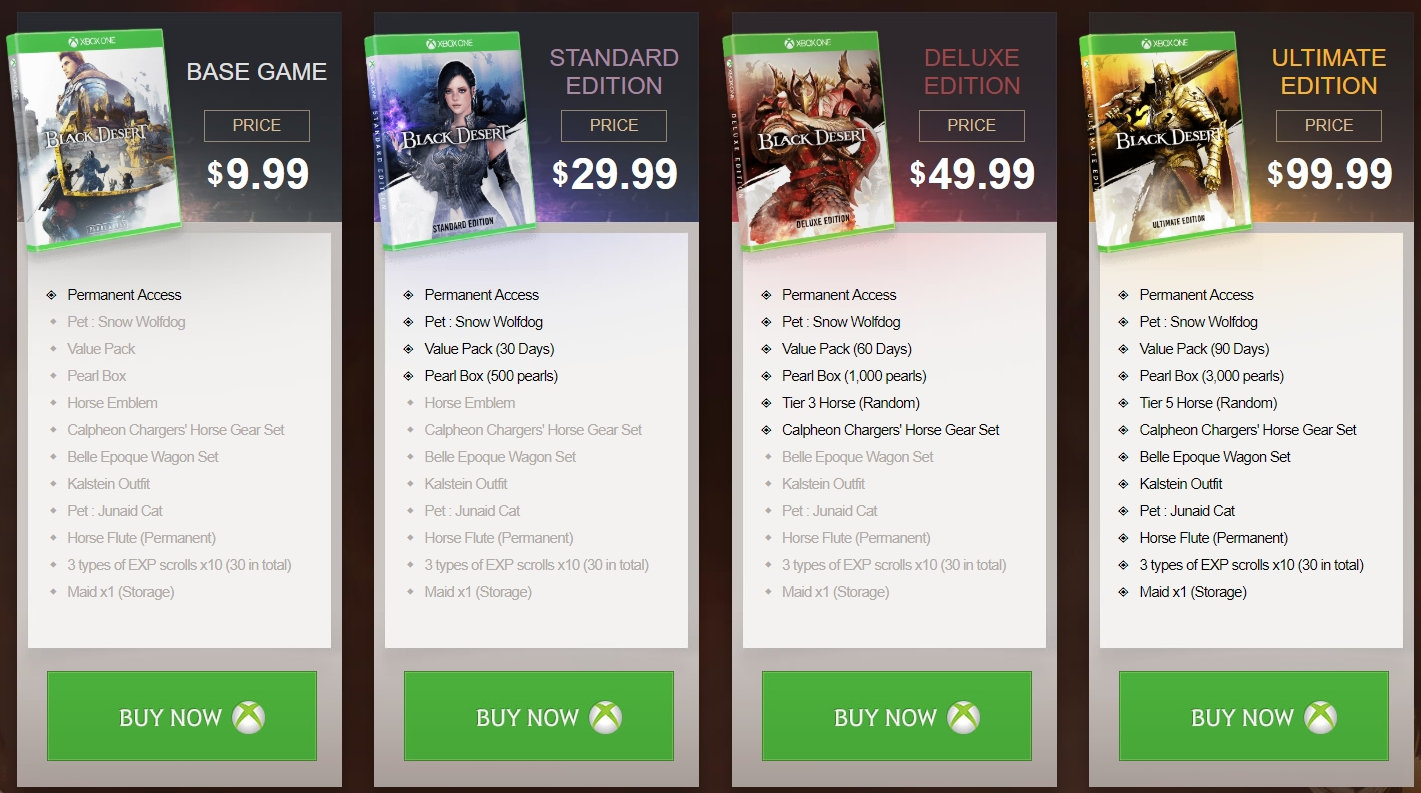 Good stuff, I’m heavily considering getting this on my Xbox.

You should probably also mention that this game requires Live Gold subscription to play on XBone. If you’re already paying it because you play other multiplayer games – this won’t affect you, if you don’t have Live Gold subscription now – this will cost you about $6 extra (if you’ll buy this from MS) each month.

Ambitious Content cadence is an understatement, but they’ve included enough speed compared to the original PC launch it might not be that bad. A lot of streamers/people are already near the 55 cap which was unheard of on a few day head start at PC launch. Seems like they’re going to be racing them through the content.

Of more interesting note, as a Pearl Abyss published product, the full cash shop offerings are pretty much there right away with the ability to sell costumes for unlimited money and melt them for cron stones. For those wondering, this pretty much is the full extent of BDO’s p2w into the game right from the get go.

However the good news is that with the new Central Market, playing BDO without paying is pretty easy these days. You can just throw up your preorder on cash shop items and they will eventually be fulfilled. On the PC version I’ve managed to grab many months of both Value Pack and Kama Blessing and can continue playing without having to consider paying for quite some time.

The value of the $99 package has not aged well. While the maid and the pets are good … a T5 horse just isn’t anymore;)!

Does this have cross platform with PC?

If it doesn then they are technically vergin servers & thise mounts have value.

They have value, but on PC launch, T5 was top end. Now with T7-8 relatively easy, a ‘premium’ package should include more!

If you were going to buy those things, then seems pretty worth.