One of the most exciting features included in The Elder Scrolls Online’s Elsweyr chapter update is the addition of a new playable class, the Necromancer. But what are Necromancers and why would you ever want to play one?

END_OF_DOCUMENT_TOKEN_TO_BE_REPLACED
In the world of The Elder Scrolls, while many beliefs about gods and the afterlife differ, there is one common thread between them all. The people of Tamriel believe in a soul that is separate from the physical body. This is true for animals as well as people. They also all believe in a natural order of things, such as death being a natural conclusion to life, and the departure of the soul from the body after death.

Necromancy, as defined by The Unofficial Elder Scrolls Pages (UESP), is quite simply “the manipulation of the souls or corpses of the dead.” In fact, necromancy often involves both. The harnessing of the power of a soul and the reanimation of a corpse usually go hand-in-hand in the world of the Elder Scrolls. At times, souls are trapped in an interim state between the world of the living and their final destination while a Necromancer attempts to give new life to a long-gone loved one. Other times, we see Necromancers attempting to raise an undead army in order to gain the ability to dominate an opponent on the battlefield.

Yet other Necromancers are filled with an intellectual curiosity, attempting to learn this dark art simply for the purpose of understanding it better. This curiosity can sometimes be pushed to an even darker place, producing Necromancers who enjoy the infliction of pain that accompanies ripping the souls from a living host.

It should come as no surprise that the practice of necromancy is fairly controversial, to say the least. In Morrowind, it is outlawed completely, while in provinces like Hammerfell and High Rock, it is met with open hostility. Some of this aversion comes from local customs that include a reverence for the dead or for ancestors long gone. Even those who aren’t violently opposed consider the practice an uncalled-for interruption of the natural order of events. Some races, such as the enterprising Khajiit, make corpses available for sale to burgeoning Necromancers in need of practice. The Empire takes a pragmatic approach to Necromancers and has even been known to hire them to further its own purposes.

Necromancers are often the villians of the Elder Scrolls universe. In addition to the many side quests within The Elder Scrolls Online that require the defeat of some minor soul manipulator or other, some of the more powerful antagonists also practice the dark art. Jagar Tharn, for example, was a battle mage and advisor to Emperor Uriel Septim VII in the third era. He stole a powerful relic called the Staff of Chaos and put into motion a plan to claim the ruby throne for himself. Part of that plan involved draining the power from the staff and binding his own life force staff’s power into the Jewel of Fire. This type of soul manipulation would require a deep knowledge of the necromantic arts. Ironically, it was the release of the energy trapped within the Jewel of Fire that caused Jagar’s demise.

Mannimarco, the main antagonist in The Elder Scrolls Online, is nicknamed the King of Worms thanks to his prowess in necromancy. In fact, he may have been the most powerful Necromancer to have ever lived. Mannimarco, a high elf with enviable magical attunement, started as a member of the heralded but mysterious Psijic Order. But the secrets of the Psijics was not enough, and Mannimarco began to dabble in necromancy. By the time we meet Mannimarco in ESO, he has mastered the manipulation of souls, a practice that our character becomes much too familiar with. Mannimarco eventually tries to trick his daedric master Molag Bal in order to trap his essence to increase Mannimarco’s own power. This plan fails, and even though Mannimarco is struck down, he becomes more powerful than we could possibly imagine. He eventually transforms himself into the first ever Lich, an immortal with vast powers over the undead.

Considering the trouble necromancy has caused in Nirn, you shouldn’t be surprised that everyday citizens are a bit jittery about the possibility of necromancers living among them. The Elder Scrolls Online has chosen to tackle this social stigma using a system similar to the justice system within towns and among friendly NPCs. If a player character is seen using a Necromancer skill, town guards and NPCs will react negatively and even work to drive the suspected Necromancer out of town. Nobody wants to be responsible for allowing the next Mannimarco or Jagar Tharn to rise up.

And while I’m speaking of the player character, the Necromancer class is composed of some interesting skill lines. My Tamriel Infinium partner Larry Everett gave us his first impressions on them in last week’s column, but at a high level, we’re able to leverage skills from three separate lines: living death (healing), bone tyrant (tanking) and grave lord (damage). Most of my characters are DPS, so it’s highly likely that I’ll stick mostly to the grave lord skills. But some of those healing/debuff skills also look pretty enticing, so I might throw one or two of those into the rotation just for fun.

One of the most interesting side-notes about the Necromancer class relates to the bone goliath ultimate in the bone tyrant line. The ultimate transforms your character into a menacing bone goliath with +30k health, but the most unique thing about this skill is mainly cosmetic. ZeniMax has actually taken the time to create separate bone goliath models for different races. The beast race bone goliath transformation actually looks different than that of man and mer. 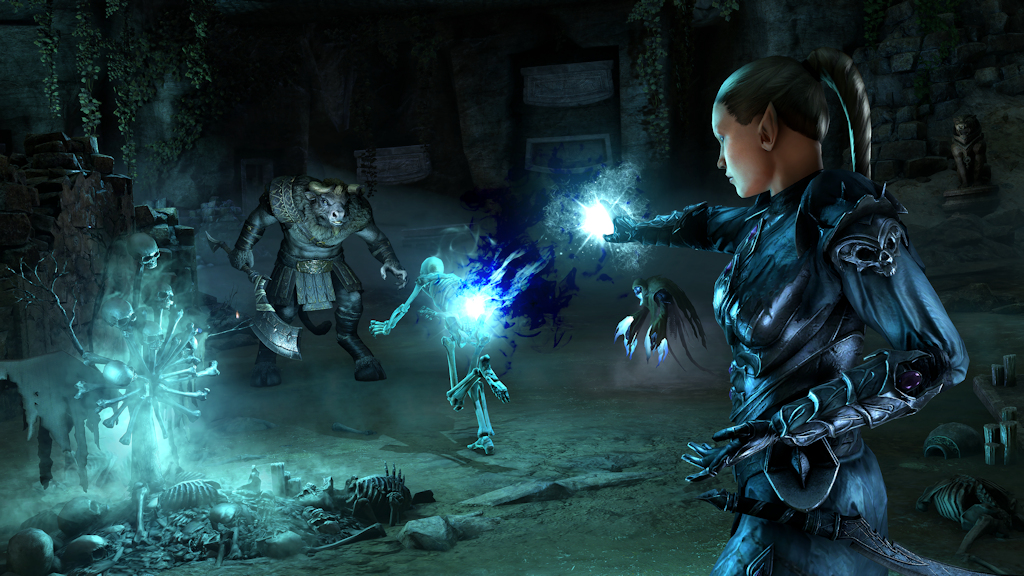 Community reaction to the new class has been mostly favorable so far as the Elsweyr beta progresses on the PTS. New classes always bring a feeling of excitement and anticipation, in this case especially since so many MMO players have been pining for a shot at necromancy since the game first launched.

There are some who will refuse to roll a Necromancer, of course, citing many of the reasons already covered here. Some gamers immersed in the lore refuse to believe that a Necromancer could be a hero of Tamriel, and admittedly they have a point. There are certainly a lot of grey-area questions associated with whether the manipulation of the natural order of things can/should be used for the good of the many.

But that’s the area that’s sometimes more fun to operate within. Just as not every choice in the Elder Scrolls series is an obvious good or bad choice, sometimes a hero emerges from where you least expect it!