This is an unusual place to be getting MMORPG news, but it looks to be legit: Comics website CBR is reporting that DC Universe Online is destined for the Nintendo Switch this summer. As MMO players already know, the 2011 MMO is already playable on PC, PlayStation 4, and Xbox One, and is one of the few true MMORPG success stories on console.

According to the exclusive report, Daybreak has worked out “small element changes for the move to the system.” Crossplay is off the table, but it will indeed remain free-to-play on the new console.

END_OF_DOCUMENT_TOKEN_TO_BE_REPLACED
“It’s very important to me that all of our communities stay the same and up to speed,” Executive Producer Leah Bowers told CBR. “I didn’t want the Switch to be in a book all to itself; I wanted the other communities to benefit from the improvements that we were making and vice versa.”
Source: CBR via Reddit. Thanks, Polyanna!

I’ll not hold my breath on this one, mostly because I’ve played some janky Switch ports recently (LA Noire, Assassin’s Creed III, etc) and Daybreak isn’t exactly a company I have faith in to port a game that already ran like hot garbage on the PS3.

That makes perfect sense tbh, the Switch is a hotcake seller and hasn’t really got a major MMORPG on it. I’ve often wondered if Daybreak would try it, I think this could work out very nicely for them.
Shame about the lack of cross-play though.

That would be nice, but I think that might be more up to Nintendo than it would be Square. Final Fantasy 11 was an exception back during the console generations prior to our current one, and was one of the only titles to be Cross-Platform on Xbox 360 (famously part of the big initiative to try and get said system a foothold in the Japanese market).

If DCUO being console-specific for the Switch is by Nintendo’s choice, Square likely won’t bother unless they can get Cross-Play. Which I’d totally dig! And if we could get the Xbox group in on things, it’d be nice to see an MMO available cross-play between all major platforms.

But even with that being allowed, I don’t know if they’d have the room on their tight development cadence to also fit things around (Also that file-size). Though, good news, you can remote play FF14 on the Vita and the Vita is sort of possibly similar to the Switch so… there’s that benefit!

From what I understand Sony has some kind of deal with the game. When the head of Xbox was asked about it, he mentioned something external to them was blocking the game coming to the platform.
Now Xbox is all cross-play loving we haven’t seen a hint of it beyond the odd rumour here and there. A bunch of Final Fantasy games are being dropped on Xbox for the first time now, so maybe that deal with Sony is over and things will change.

For the Switch, I feel the technical aspect would be too challenging.

I’m going to hold out hope that its doable. Switch has more power under the hood than a PS3, and ARR ran amicably on it. So while I dont imagine it being the go-to for something like when Odin shows up, it’ll be fine for casual play…. and i wouldn’t be surprised if a hardcore ffxiv player can make it work in the toughest raid.

I actually bought a special vita case that adds R2 and L2 buttons just to remote play! It was kinda laggy though sadly, but maybe I’ll give it another shot. 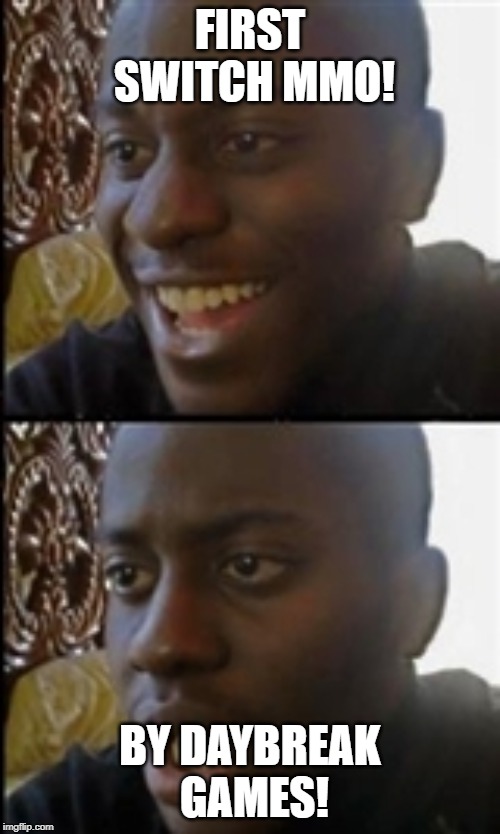 Onigiri was the first MMO on Switch

I swear, DCUO is the only game that’s not a mess for them. It may be quiet, but it seems like a quiet success. Good on them.

Landmark would be great on the switch.

Even better on PC :(

I didn’t see a Daybreak logo in the trailer.

I have been typing variations of that all afternoon but thought it too mean to actually post. Thanks for stepping up :p