Tomorrow was supposed to be a big day for Killerwhale Games’ MMO RAW as it concluded its Kickstarter campaign – in fact, we had a note in our newsroom to check up on it again after it had funded. It’s not to be, however, as MMO Fallout noticed the campaign was suspended (that’s Kickstarter’s word) just this morning with just hours left to go in the campaign.

We first learned about the game well after its Kickstarter began in June, after it had already raised the majority of its ask; we noted at the time that it seemed to be run by a novice dev team making rather lofty promises without any PR, as well as the fact that gamers had lodged complaints about dodgy recycled assets and the possibility that it was violating German law. Nevertheless, the campaign soared to nearly $200,000 US by the time it was shut down.

According to a Redditor who backed the campaign, Kickstarter’s Trust and Safety Team mailed backers this morning informing them their pledges had been canceled and giving a rather nonspecific explanation: “To protect our community, we may suspend projects when they demonstrate one or more of the following: A creator (or someone directly related to them) posing as an independent party to create the illusion of support in project comments or elsewhere” or “[a]ppropriating someone else’s biography or falsifying an identity” or “[m]isrepresenting or failing to disclose relevant facts about the project or its creator.” It’s not clear why the company allowed the campaign to continue for many weeks before canceling it.

The Discord has an even longer explanation and signals intent to move a campaign to Indiegogo, which we’ll note here allows creators more flexible funding such that they get anything that is donated, even if the campaign doesn’t reach its arbitrary goal – meaning even fewer protections for backers. 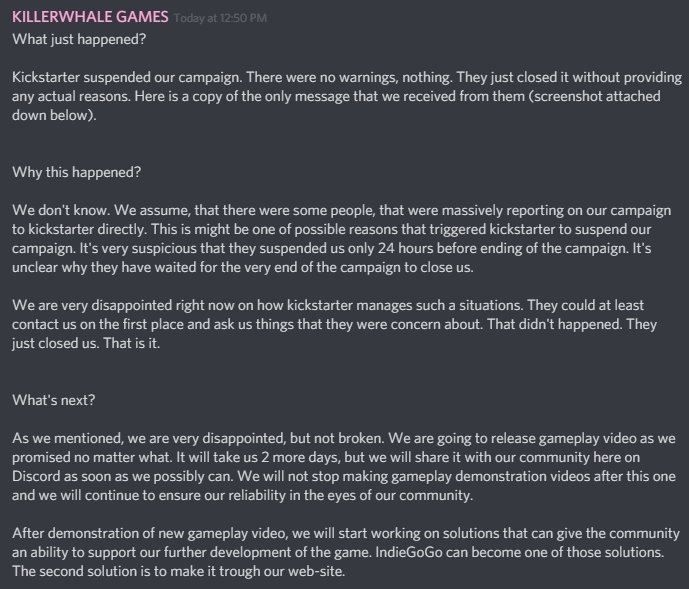 The message these devs say was sent to them from Kickstarter jibes with the one sent to backers. An additional FAQ posted in the game’s Discord asserts that “the Kickstarter has been suspended because the developers ‘would need to raise additional funds outside of Kickstarter to complete the game,'” a claim that has not to our knowledge been supported by anything made public by Kickstarter and that doesn’t comport with Kickstarter’s previous standards when it comes to funding MMOs. [Update: Kickstarter apparently confirmed this rationale to PCGN, which should certainly raise some alarm, given how many MMOs have rather transparently admitted their Kickstarters could not possibly fund an entire game.]

The lesson here is, as always, if it sounds too good to be true, it probably is, and your best course of action is to not put any money into it – if it’s a scam, you win, and if it’s not a scam, you still win because you can buy it at launch anyway. A lot of our readers are probably too young to remember the Glitchless MMO Dawn, but it’s worth a refresher all the same, if only because websites with the history of the word “fetapult” are slowly blinking out of existence and everyone needs to know that these kinds of pitches aren’t new in gaming whatsoever.