It is no secret that Aion has frustrated me significantly to the point I can’t even log in and play anymore. I get too annoyed just thinking about it. Which is super disappointing, since I was poised for a full return to the game with the adventures chronicled in the newly resurrected Wings Over Atreia.

END_OF_DOCUMENT_TOKEN_TO_BE_REPLACED
But that Awakened Legacy update really ruined it for me. And it still bothers me because Atreia is a beautiful world rich in lore and story. I still glance over at the game every now and then in hopes I can give it another go. Truly, I had many amazing memories in Aion! I covered it professionally for years! But I am always repulsed again by the way the world was butchered. (Watching the insane length of time that updates are taking to hit doesn’t help either, like the long-missing-but-finally-just-announced Mark of the Vandal; calling it a snail’s pace is an insult to the speed of snails!)

As I sat and lamented the loss of the world I knew in the supposed name of story progression (I feel it was more to feed folks into PvP), it occurred to me that while I felt Aion failed as a MMORPG now, it would rock… as a TV miniseries! All that change that has made it unplayable to me would make it a must-see watch. Just take a look at this lore.

Now, would the show be a single miniseries that plays out over seven or so shows? Or would each expansion fill an entire season of six or more episodes Game of Thrones style? I could see it go either way successfully, depending on director and budget. But for a true experience, I think you need multiple seasons. Yes, that’s just how detailed and in-depth the lore is! For WOA, we’ll just assume a full season for each story arc. We’ll start with the pilot season and expand to the meatier second season. I have to say, these first seasons would be epic as they involve all the pre-game history brought to life! As with any series, however, you’ll have to wait for the rest of the story to unfold!

Season One: The Tower of Eternity

It all opens with the celestial creation of Atreia, set in a slightly fuzzy, unfocused scene. Atreia is a small cosmos within a planet, with vast sky in the middle and life flourishing on the interior edges. You meet Aion, an ageless deity who takes the shape of The Tower of Eternity and anchors the massive world, connecting the ‘top” and “bottom” sides together.

As is wont to happen, idyllic life doesn’t last. The flight-capable Draken race resent the Sapien species that also came to exist, including the humans. These humans and other Sapiens flourish for thousands of years until the Draken became too power-hungry and cast off their role as stewards of the planet and are bent on conquering all of Atreia. The humans are the only species that resisted as the Draken eradicated or enslaved all the others. Soon the Draken become their own, autonomous race, the Balaur, and they evolve. Some evolve to even greater intelligence and strength. From those, five take command. Those five — Fregion, Meslamtaeda, Ereshkigal, Beritra, and Tiamat — become Dragon Lords that rule the rest.

Next up, Aion creates aether (a magical substance) and 12 Empyrean Lords to assist the humans who are being wiped out. Siel and Israphel, the leaders of these Empyrean Lords, guard the Tower of Eternity. Certain devout humans are infused with aether and then undergo a physical and spiritual transformation known as Ascension. These ascended Daevas then fight a war with the Balaur for centuries. A magical aetheric field surrounds the Tower and the area around it, but the battle beyond it lays waste to everything.

The Empyrean Lord Israphel proposes peace, but there is heated debate with the other lords. Finally, Israphel Lady Seil offers a peace proposal to the Balaur without the approval of the other 10, and the Dragon Lords are invited into the Tower. It starts peaceably, and things are promising until an assassination attempt on a Dragon Lord; chaos breaks out as violence erupts. The Tower of Eternity is taking a beating, but before it can collapse, Israphel and Seil, guardians of the Tower, unite again to save it and restore the aetheric field. Israphel commands Lord Asphel and his legions to the north base of the tower, and Seil sends Lord Ariel and her legions to the south. Then the tower’s two guardians pour their whole selves into the effort, succeeding by sacrificing their lives. However, the world is fractured in this event. And Atreia as it was known is no more.

The new season picks up right after the Epic Cataclysm itself, when the remaining Empyrean Lords abandon the fractured tower and split into two groups. On one side you have the Seraphim Lords who moved with their followers to the lands that became known as Elysea and created the Arc Seraphim role to preside over all things political. Kissed by the sun and full of beautiful growth and promise, life was more idyllic again. The followers of the Seraphim lords call themselves Elyos. Happy events abound as life continues (except maybe the part about Poppy the porgus). The white-winged angelic Daevas help the humans in any struggles and celebrate in the successes.

The next episode begins with the second group, the Shedim Lords, taking their flock to the other half of the fractured world. Here, however, it is not a pristine garden. No, the upper hemisphere of Atreia is a battle-ravaged wasteland that cannot escape the darkness. An Arc Shedim role is formed, and Asphel is immediately given the position. Life is harsh, but the beautiful city of Pandaemonium grows. Over time, the peoples of this land evolve to better live in the conditions, including clawed hands and feet, eyes that flash red in anger, and insulating manes on their backs. This new people became the Asmodians, and their brutal land, Asmodae.

While life continues for the two races, strange fissures start appearing — tears in realm. The largest appeared directly over the village of Verteron. What lies on the other side? In Elysea, Storm Legion Brigade General Deltras is sent through to investigate. The land Deltras and his warriors find themselves in is no land at all — it’s a massive expanse of aether-infused space, with smaller islands of land dotting the horizon. Finding they can fly with more freedom, the Storm Legion begin to explore, then are visciously attacked by a horde of the dragon-esque Balaur! A massive battle takes place, but the Balaur are driven back from the island the warriors occupied. Teminon Landing is born. 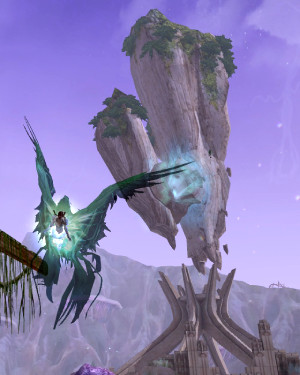 Another rift opens in Elysia. Curious about what other realms of Atreia might exist, the storm Legion is sent through once again. This time, there is no beauty of the open space and swirling aether currents. This is a dark, desolate land. Deltras came upon an inhabitant of the land who look strikingly similar to the Elyos but for their darker skin and clawed extremities. Deltras is seen approaching the natives. Is it in peace? He introduces himself and his elite legion. A spokesman for the Asmodians quickly comes forth, the current Shedim Lord, Zikel. Flashbacks to the teachings of how the Asmodians caused the destruction of the Tower of Eternity are played. Words are exchanged between Deltras and Zikel, and Zikel throws Deltras down.

A broken shard of the Tower of Eternity starts to glow on Asmodae and the Archons, the strongest of the Asmodian Daevas, are sent in. Upon investigation, it opens into a world of floating rock islands. The Archons breathe deeply in relief at the preponderance of aether there that restores their Daeva abilities. The Shedim Lord does not share in the relief and posts guards. Asphel’s only answer to the question as to why is to look up toward the lower half of the fragmented Atreia.

As preparations are made to go through the portal again, the unthinkable happens: Pandaemonium loses contact with the Morheim settlement. Zikel takes Archons to investigate and finds a haughty group of light-skinned men with weapons drawn and wings unfurled. Flashbacks to the teachings of how the cowardly, soft-hearted Seraphim who insisted on attempting peace destroyed the world with their idiotic attempt. Zikel charges ahead in rage to speak with the leader of the group, but throws him down and demands these Elyos acknowledge their Lords’ mistake and condemn them. From the ground, Deltras refuses.

In the final episode, the blood feud begins! The Archons and the Storm Legion battle. It is brutal and bloody! Fighting moves from the field to even part of the city of Pandaemonium. Deltras is struck down, and The Legion of Storm Centurions tries to retreat back through the rift. Only six can get to the rift and in, but two do not make it through. The rest are lost. After the battle, in Pandaemonium the Asmodians prepare for war against the tyrannical Elyos who invaded their lands, whose Seraphims caused all the destruction, and whose stump of the eternity tower must be destroyed before it drains all the aether and causes all life to be destroyed. And the Elyos, enflamed by the butchering of the Storm Legion who went in peace, declare war on Asmodae. Both sides declare there will be no mercy.

What do you think – does the lore have potential for the big screen?