Sometimes, you’ve just got to run around and blow up hordes of enemies with big flashy skills and hoover in the goodies. You have to get mindless. You have to take it easy on yourself and (dare I say it) play something easy. You need the catharsis that an ARPG seems to be particularly good at. That need is what steered this month’s edition of Choose My Adventure, and the votes have brought us to the alpha world of Torchlight Frontiers.

It’s been a while since I’ve booted up this game, having played it briefly for a livestream for MOP, but even during that early stage I had a good time. That said, I also got distracted by lots of other games out of a need to play the more “traditional” MMORPGs. Now, though, that hunger to blow things apart has crept up again, and I have to say that this game, even at this early stage of development, is feeding that hunger extremely well. 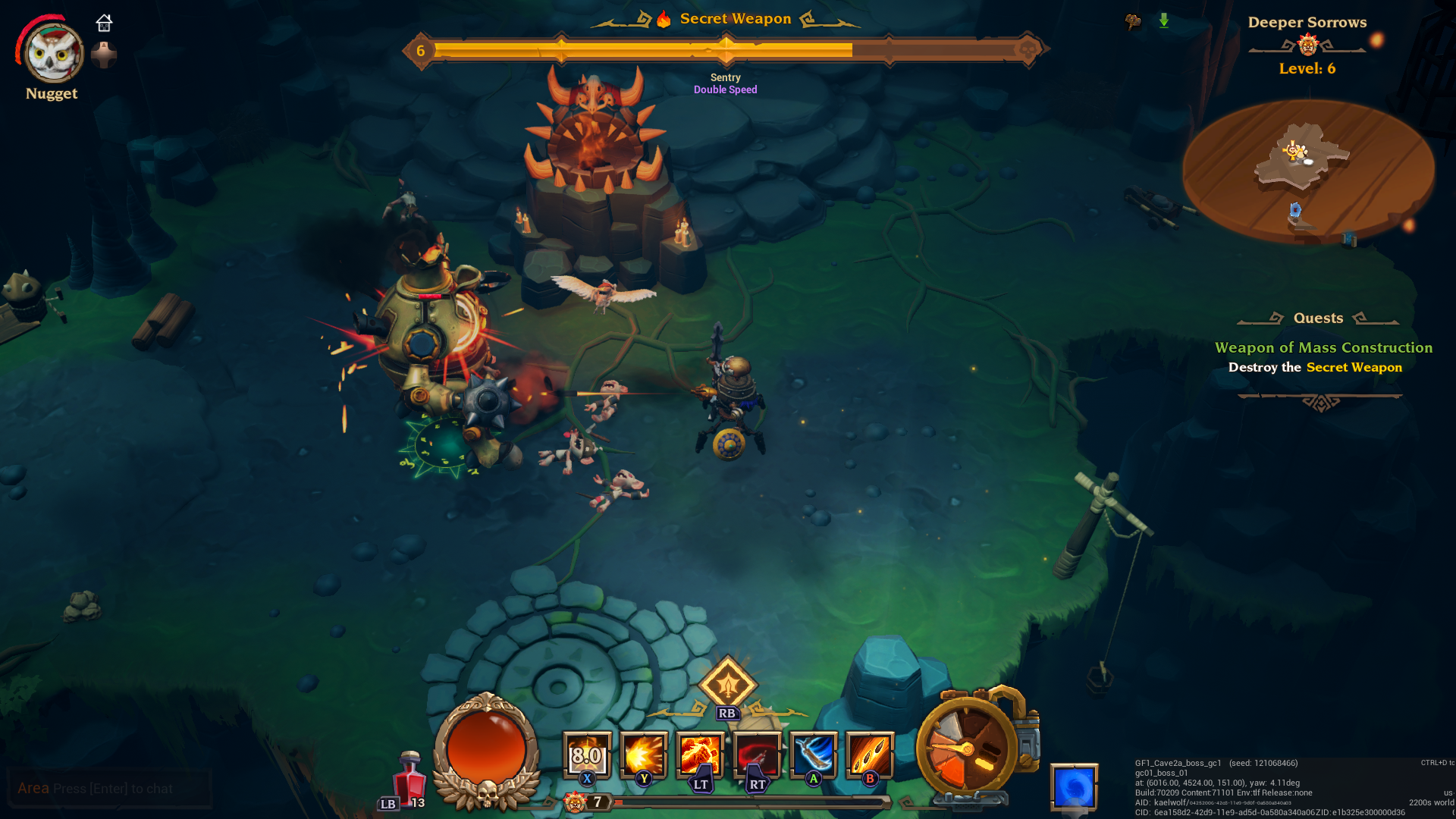 Torchlight has always been something of a darling IP for me. The first two games were so well-built and fun to play, even if the world of the game didn’t really strike me as particularly compelling. Something about its charm and color and simple yet clean ARPG gaming always appealed, and every bit of that polish is immediately evident in Frontiers. This game just looks and feels good, even in an alpha state.

Alpha here I assume just sort of means that there are lots of gameplay beats still missing. It’s early days yet for this adventure, of course, but the interim levels absolutely feel like a fully polished game. Though you’ll perhaps notice that my screenshots don’t really have high level characters in them. That’s because I wanted to try a little bit of everything.

When I first started I went with the Forged class mostly because I wanted to play the cute and clunky robot. I first started out in the game’s earlier alpha builds with the Dusk Mage, but found it to be a little bit too generic. For some reason, the Forged feels different enough that it stood out to me even if it kind of was a sort of Ranger-style class. Again, I think it’s the style; my good clanking boy rumbles along and blasts foes apart with a shotgun in his chest and the ability to draw people in and blow things apart with built-up heat. It’s a stupendously fun class. 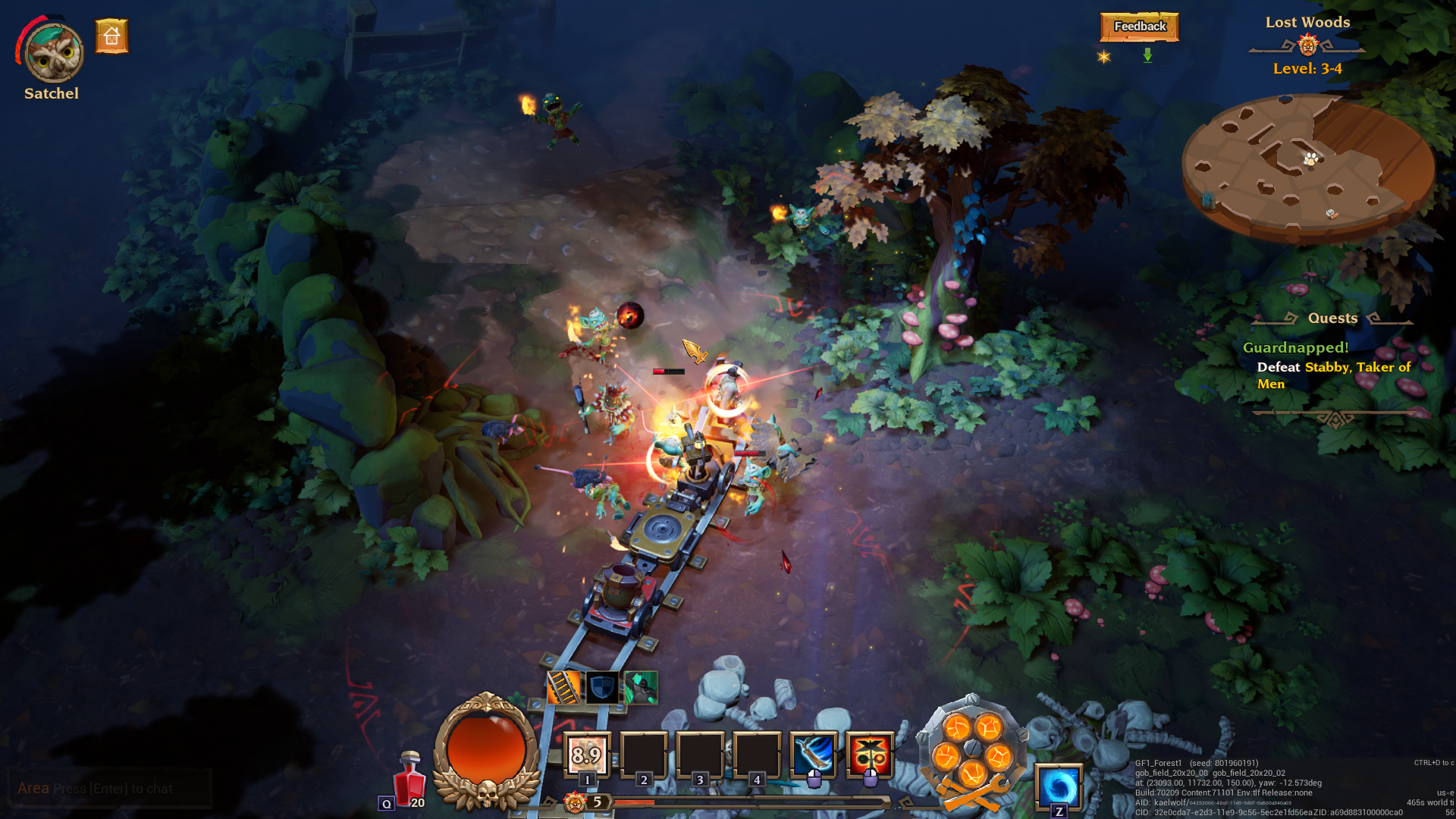 The Railmaster is another bit of unique ARPG gaming in that they are a pet class that has a train as a pet. The fact that rail track automatically arrives to keep the murder train rumbling nearby is a visually interesting touch, while the train itself felt like it did a pretty good job of keeping foes under duress.

I’m still not sure how I feel about the Railmaster, mostly because I despise pet classes of all sorts. Even so, at least this pet is incredibly customizable with the skills I can pick out for it, and the pet AI doesn’t seem to be particularly dense as well, which is a nice touch. Perhaps time will tell if that will hold true, but the Railmaster has made a pretty strong first impression, and that’s not an easy thing considering my seemingly genetic or cosmic revulsion at pet classes. 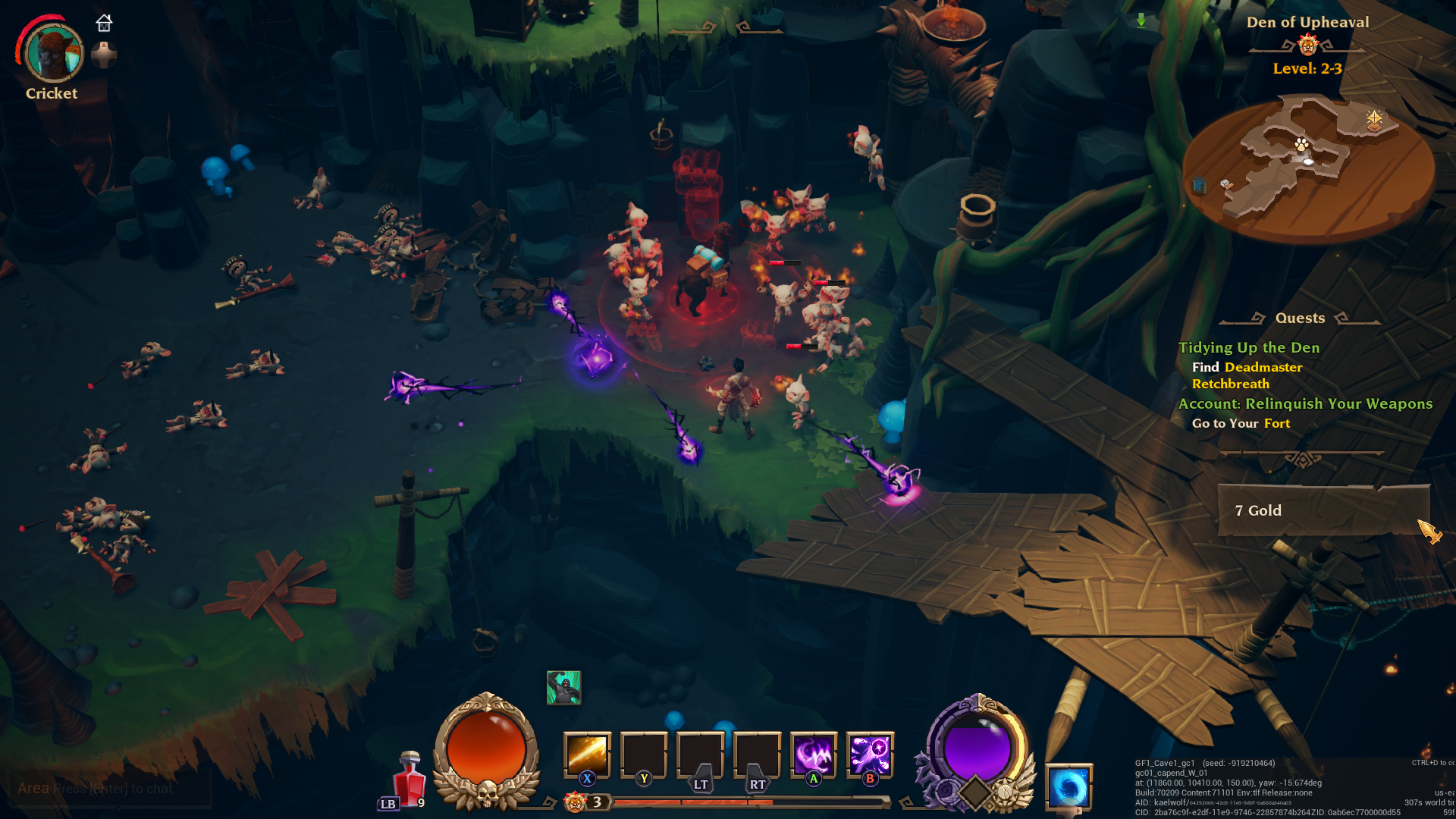 The last thing I wanted to try out was the Dusk Mage, just to see if indeed maybe it wasn’t quite as interesting as I had recalled. Sure enough, it’s a pretty bog standard magic using class, but at the same time there also seems to be a bit more oomph to this class’ attack that I don’t recall there being before. Some of that impact feels like it comes from one particular skill that lets me summon a big orb of dark energy that slowly travels along and fires extra smaller balls of dark energy at everything. This skill is kind of ridiculous, at least visually, and while I don’t think it’s doing particularly impressive damage, it’s just that kind of bombastic style that I needed to experience.

Really, that’s the ultimate point of why I wanted to play this game. I needed big, flashy damage. I needed to see hordes of enemies fall before me with some pretty, kinetic, explosive effects. These games were always meant to be like hyper-violent cartoons, and Torchlight Frontiers has that sort of playful, colorful style that makes games like this just work for me. It’s like playing an Itchy and Scratchy Show episode with even less wit and just as much mindless violence. 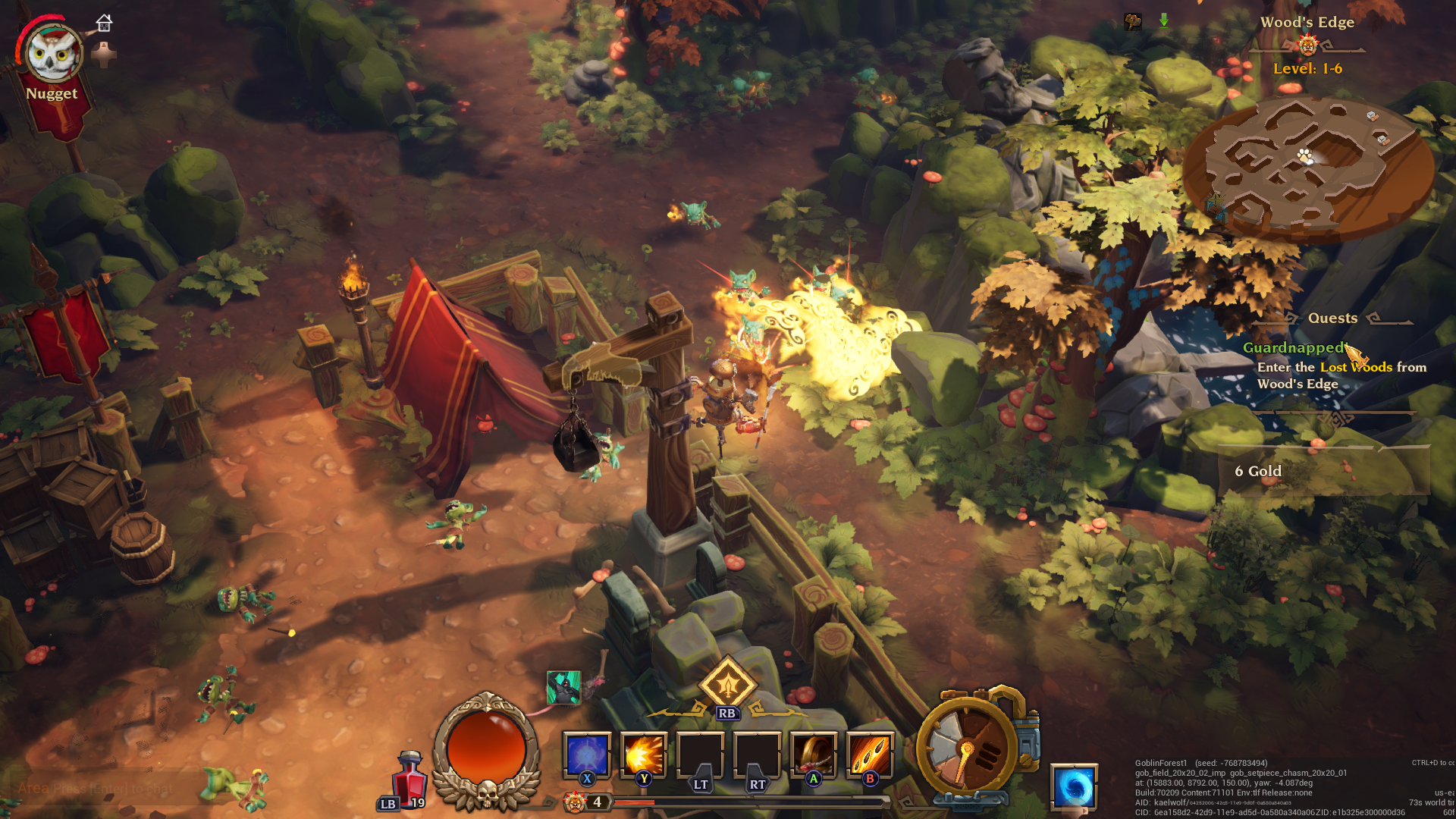 Of course, all of this gameplay doesn’t really answer whether this is a fun MMO or not, and I have to admit that I didn’t see a lot of other players running around during my time in-game. I’m only just starting, of course; it’s entirely possible that everyone is at much higher level than I am. Or maybe this game is quiet because there aren’t many alpha testers or people who want to play an alpha MMO. Time will ultimately tell.

Regardless, I am having a good time. Of course, with three class choices to pick from, I’ll not get anywhere meaningful in terms of progression if I play all of them at once. So that leads us to this week’s poll.

I already explained what intrigues me about each of the three classes, and while I have a soft spot for the Forged class, I would very much like to see what you fine readers think should be the main character for our adventure through this brightly hued and violent world. Which class should I pick up in order to blow up as many foes as possible?

Which class should I focus on in our Torchlight Frontiers adventure? 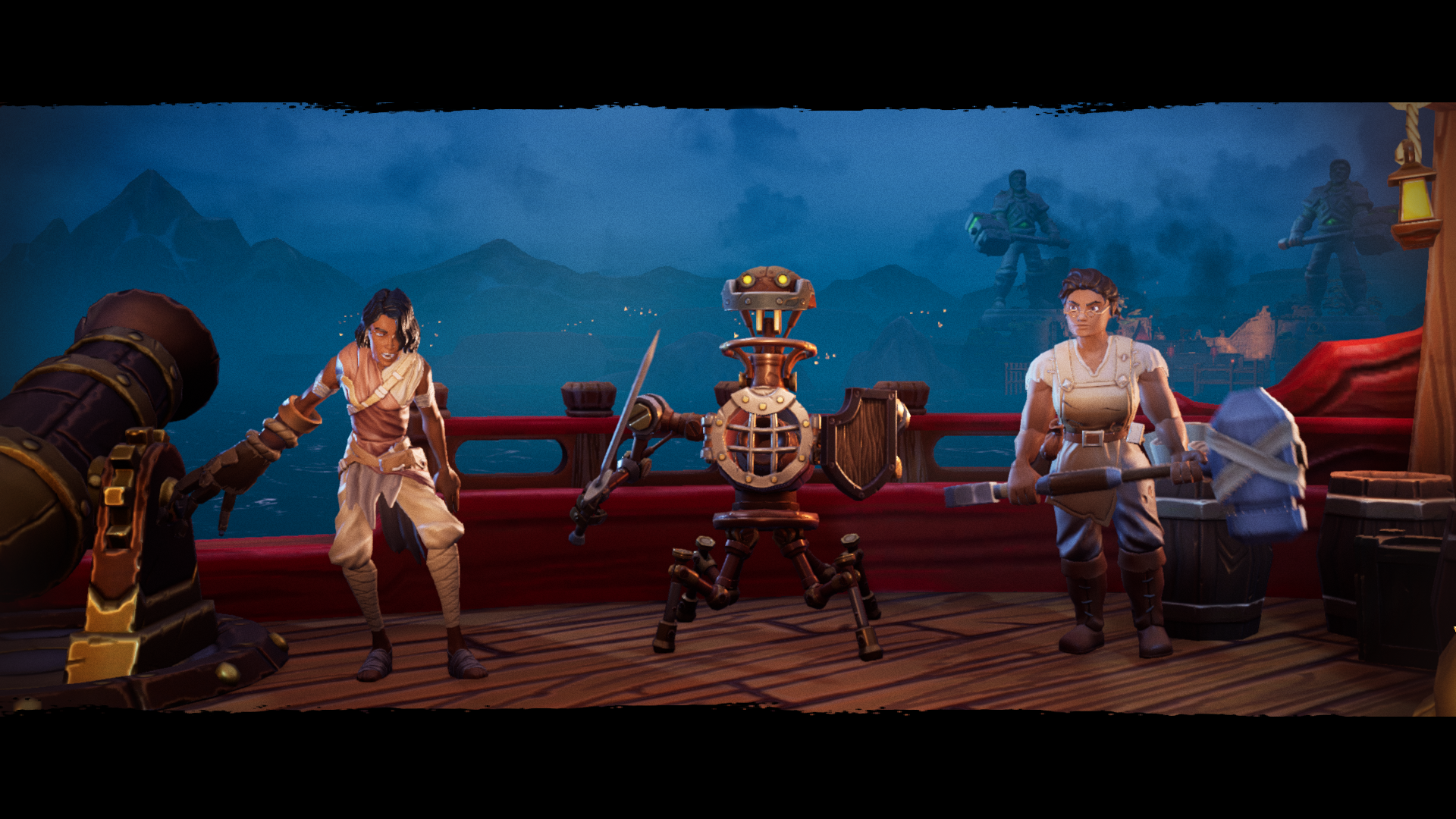 As usual, voting will wrap up at 1:00 p.m. EDT this coming Friday, October 4th. For now, I’m likely going to indulge my current Torchlight Frontiers altitis and play a little bit of each class and get them some more levels before I see where voting says I should focus on. Because, again, I just need this.

The number of players you see or don’t see are both because of instanced maps and because it’s still early in testing and only limited amounts of people have been let into the game at this point.

You do make a good point though, the game, like most ARPGs may be too easy. I enjoy difficult ARPGs that take thoughtful dodging and lots of twitchy play to live. I don’t really like the kind where you just spam skills and pots and if you live or not is based on your levels and the levels of your equipment rather than skill.

I am okay with some mindless hordes on the way through, but enjoy a lot of more difficult combat thrown in as well that takes either actual skill or strategic thinking. Too many ARPGs are just about level and equipment.

Some of the very best combat I’ve experienced for play and difficulty in an ARPG is in Killsquad. It takes real skill and thinking and is incredibly fun. Sadly the rest of the game isn’t that fun for me, no story, just randomized levels on the same few planets over and over without a real feeling of growth or advancement. If you took their incredible combat and put it in a full ARPG game world, that would be crazy amazing.

Though I find the combat in Pagan Online to be fairly decent too. Not anything like Killsquad, and it has some issues about skills moving smoothly one into the other, and the way the monsters just appear around you is sort of lame, but it’s basically a little more difficult than usual and more fun for me because of it.

Zengeon was fun for me as well. Somewhat more difficult twitchy combat along with permadeath. Classes that all were pretty different. It was nice for brief play through the game but after going through it to the end a few times I was done with it. It was more difficult, but not that difficult for me. I had been into permadeath games at the time I played it and played it like you were supposed to play permadeath games, so I didn’t have too much of a difficult time in it. Other people playing it like normal ARPGs where you stand in the middle of crowds of monsters spamming skills and pots found themselves dying and complaining.

I really would like to see Torchlight Frontiers gain more difficulty. I’m not so sure it would still be a Torchlight game if we added too much, but at least some interesting different mechanics for bosses and far more difficult mini bosses around (not because they’re high HP with super HP regen, but because they take some real thinking or strategies).

I love all the polish they’ve done since the beginning of the alpha but I don’t particularly care for the classes they have atm. The last one looks promising based on the little silhouette on the website but alas until then I’m not interested.

After weeks of waiting to get in the beta, I finally got in. Played for 5 days and haven’t been back since. I got bored of it that quick.

Does this game have character customization? I don’t think I’ve seen that question answered

Very limited in the single video I’ve seen: Gender, skin tone – not much else.

The Daily Grind: What does the future of (World of) Warcraft look like?

Massively Overthinking: Doing crimes and getting punished in MMORPGs