So, yes, summer 2020 seems like a long way away, but we’re also literally weeks away from the new year, so the new stuff coming to Dual Universe will be here before you even know it. The in-development space-based voxelbox has kicked out a fresh roadmap with release windows for alpha 3, beta testing, launch, and even post-launch.

According to the map, alpha 3 is being re-confirmed for January 2020, bringing with it features we mentioned previously like construct vs. construct combat and Organizations, along with surface gathering, market improvements, and space stations. From there, beta tests 1 and 2 will bring a fast travel system that lets players build their own space highways, the next iteration of construct combat, alien planets, territory warfare, and player-created missions. Beta 1 is expected for summer 2020 and beta 2 is eyeing early 2021.

After that is launch, aka Awakening, which is expected at some point in 2021. The launch update will introduce features like power production and consumption, player-made markets, the ability to sell constructs or blueprints to one another, pets, parties, and character customization. Beyond release, Dual Universe is looking at including star gates to explore new solar systems, factory ownership to mass-produce vehicles, and avatar vs. avatar combat.

Of course, this is the roadmap as it stands now — things are always subject to change — but you can get a look at the complete roadmap by clicking the image below. There’s also a podcast talking about this new roadmap and answering player questions embedded below as well. 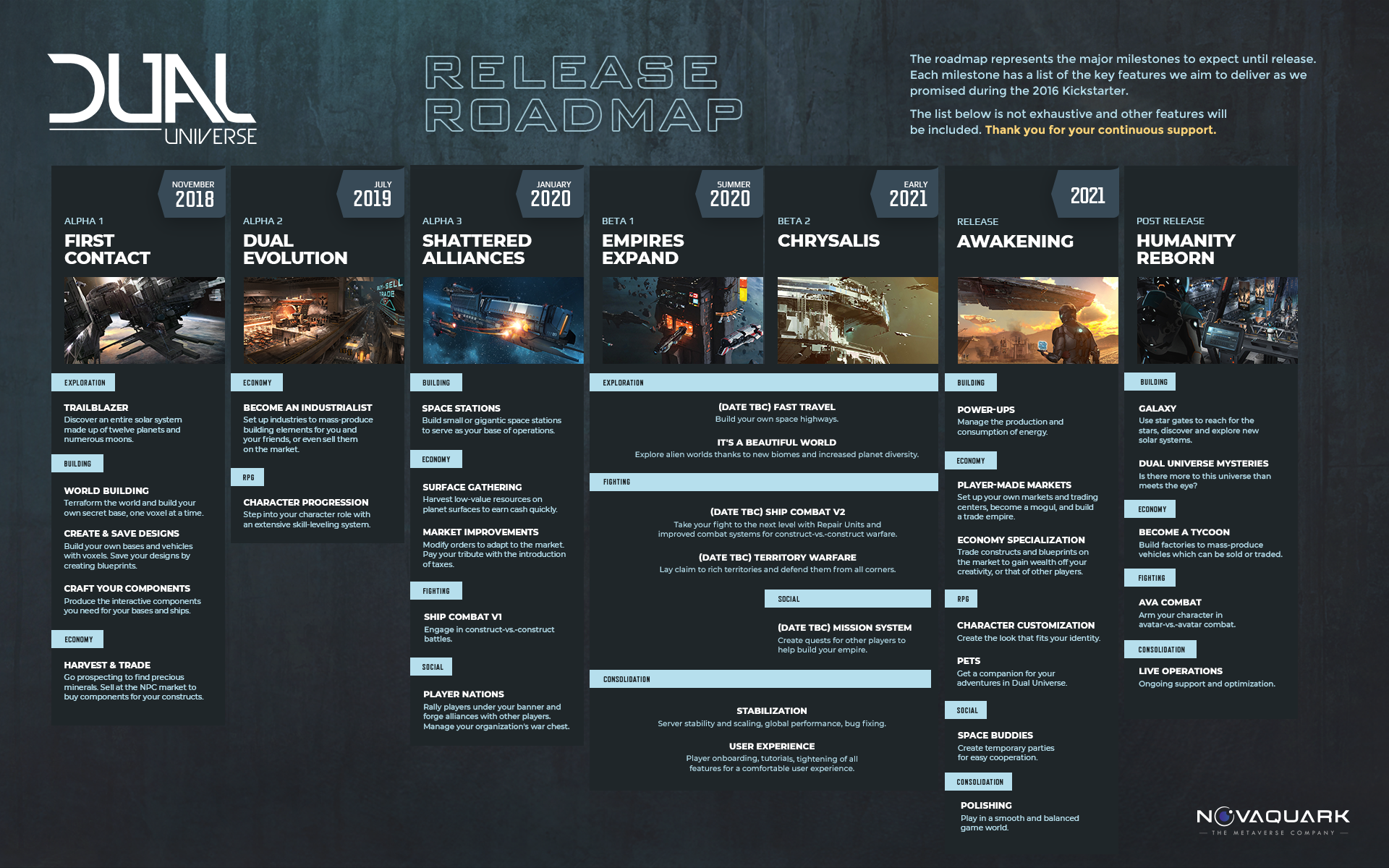 It hasn’t been the focus and center of the game. The main focus is on building and constructing and the player-run economy so far. They add new features slowly one after another. Its all planned…

I hope the NDA gets lifeted soon, really want to see more about this game.

I would bet in Beta. Don’t want to break my NDA but there isn’t to much to show at the moment.

They said NDA will be kept AT LEAST until march 2020, maybe longer. If NDA is not lifted during Alpha 3, then probably with Beta.

There are some stuff released but it is just hard to find. The Latest Gem is the DU Community Spotlight #8 Interview with Kornelius where they link to a fan made Newbie guide that gives a good look on the starting game. Its on the official DU site.

See this is what Star Citizen should should do. Some of that stuff in the post release content was supposed to come at launch. They can’t make it so they announced it for post launch so they can push it out sooner.

I believe the reason Star Citizen keeps adding new things, ships specifically, is because they need the money to pay for previous promises.

Imagine the backlash if they would do that: ‘They have 250 million dollars and they launch without all the promised content!” – at this point they can’t win either way, whatever they do.

This is one of the games that has convinced me to stop kickstarting MMO’s. It’s not that I mind waiting so much (it was supposed to ship in December, 2018), it’s that the endless email updates on their progress have gradually worn out my excitement for the game. I hope the game’s great and makes its players happy; I’m not sure that I’ll be there when it is released.

This game project and concept has convinced me to pledge, my second only kickstarter backing. And I enjoy the Alpha-Test-Sessions… :)
But waiting is ok, it only gets better and more polished. Delays are normal with MMO projects. Dual Universe devs don’t exaggerate and promise the moon.

The Feast of Swords returns to Final Fantasy XI