Not quite a year ago, when Amazon took New World out of alpha and back to the drawing board, I posed almost this exact question for our readers. Now, it’s back in alpha with a new plan for toning down the PvP that isn’t impressing critics – or PvE players. Earlier this week, some mainstream press previewed the current state of the alpha; IGN, for example, said the character creator was barren, with the PvE content being “about as predictable and cookie-cutter as PvE content can get in an MMO.” The words “tedious,” “grind,” “monotonous,” and “empty” were used. “PvE felt lifeless, uninspired, and unoriginal,” the site wrote, arguing that it was obvious the game had begun as a PvP title that had lost its identity. Yikes. In fact, the few things the preview praised came down to solid combat, character development, and… PvP skirmishes.

In other words, all the concerns MMO players had about the shift to a PvE-focus for the game where little PvE-focus existed before seem more and more legitimate. Sure, people were happy to see the PvP dialed back a bit, but they also wanted to see the ganking replaced with good content. If the game launches like this, it’s not clear who exactly will be happy with the result if neither PvP nor PvE fans are having fun. And that’s a shame, because when we previewed the game last year, we did like it.

“How bad do you gotta be to get a bad IGN review?” MOP commenter Arktouros joked when he tipped it over to us.

A few days ago, well over half of you said you were now or still interested in the game, but the conversation around the game keeps changing almost faster than we can all keep up. Are you now concerned about the launch of Amazon’s New World? Is there a point of negativity at which you think Amazon might just give up entirely?

There are a handful of games out there that have spoke out in regret trying to cater to PvE players (heads up – in the end they will complain about everything) ESPECIALLY when the game’s identity was PvP. We don’t speak out much (my first comment ever on a game in 17 years) because we know opinions are like assholes, but in this new era Amazon will find out in a bad way – like the others – stop changing your game in fear of the PvEr. They jump game to game, never dive into anything or commit.

What if, and I realize this may be a big “what if”, we wait until the game is out of ALPHA TESTING before we get too hung up on the state of the game?

That’s what we said a year ago lol. At what point do we admit they made these decisions intentionally.

I’d say when it’s out of ALPHA, at the very least. We know it was taken out of testing and heavily revamped, and now it’s back in testing. Let’s give time to actually finish the game before we get the torches and pitchforks out! 😋

Just by removing a problematic feature doesn’t make a game good. There are essentially many aspects that should also be taken into consideration. They may have made a step forward changing PvP, but the follow-up is equally if not more important.

Just read through a review by MMORPG, and the game sounds promising to me –>

I think people are misunderstanding what Amazon is trying to do and perhaps they’re not clear enough on communicating that, either. From what I’ve read and what I saw in the first alpha, they had two main issues:

1. The OwPvP ganking problem
2. Lack of enough gameplay options for the solo player

These were both hot topics on the alpha forums at the time and I personally gave feedback in the 2nd (and IIRC it was something they explicitly asked for feedback on at one point).

So those are the two problems they fixed. It doesn’t appear this is a revamp of the game at all. I think they perhaps went too far on fixing the PvP ganking issue. They could have either adjusted the OwPvP ruleset, or added PvP and PvE servers. But either way it was a problem and they fixed it with a realistically small change. You can still opt-in and the biggest focus of the game, PvP sieges, are still there. The heart of the game hasn’t changed at all, there.

Secondly, they added some systems and adjusted others to give solo players something to do and a way to play the game without having to be in a guild and be focused on PvP sieges and supporting the guild towards that. I think people who are thinking that Amazon went full PvE are mistaken and making assumptions. The reality is this is the same game they had last year, except they’ve introduced systems to allow the solo player a real place in this guild territory PvP game. Not a game that was ever intended to have robust questing, lore, or organized PvE content like dungeons and raids. They never said they would do any of that.

Previously if you were solo, you missed out on a lot of the game. You couldn’t even access crafting stations beyond the most basic stuff because it was guild only (it was something guilds could build once owning territory, and outsiders didn’t have access). And of course running around solo to do what you even could do in the world put you at risk of dying to PvP. But you couldn’t go very far in the world since you were limited to only the most basic gear. So with adjusted systems and an introductory questline, you can actually craft, and kill monsters, and explore without dying, and actually participate in territory activities and access them without being in a guild. And they’ve added the monster siege and housing systems for those players as well. So you have your little solo non-guilded spot and gameplay motivations in an otherwise PvP siege game.

If you approach the game with this mindset their changes make sense, and the current game design from how I understand it (I don’t have current testing access). It’s still intended to be a guild focused territory control PvP game with an open world focus. Except now they’ve just made it more mainstream. It seems to me to have similarities in a lot of core ways to Black Desert.

So to get to your question:

“Are you now concerned about the launch of Amazon’s New World? ”

I’m really only concerned about communications and troublesome expectations as a result of poor communication. From what I can tell this is shaping up to be the game they set out to make with mostly appropriate changes (although tbh I think they need to adjust the PvP flagging issue because they’ve alienated a lot of people). I was never super into this game so I could take it or leave it. But I do think it’s sounding better than it was. And they’re honoring the free pre-orders so I get the game for free which means I might as well try it.

I think your point that New World is similar to Black Desert is spot on. A connection I hadn’t made until you pointed it out. The changes to create a solo or PvE niche inside the territory control PvP game, has fixed what I dislike about Black Desert– Forced Open World PvP.

Well… I also very much dislike the insane RNG aspect to improving your gear in BDO, and the near necessity of purchasing the cash shop items to improve your chances… hopefully New World steered away from that.

They’re rushing it, and I’m sure they know it.

I never expect an MMO to launch perfect. All I care for start, is to be able to make a beautiful/likeable character and then the animations and combat to be pleasing in my eyes. If I can have that, I am all for waiting patiently for the MMO to evolve and find its way.

Just to save people who got into alpha some time, here is what you can currently explore in game: 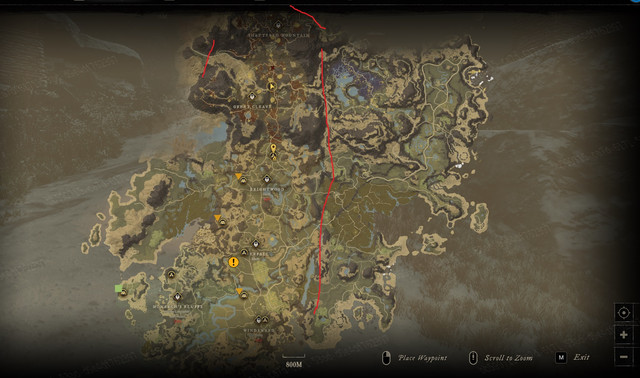 The maps area on the right are closed with barrier which will take away your health, there are also barriers in other map areas, I marked them using red color. They will be opened when new content will be added. Right now there is no reason to be there.

That’s a shame that swamp area was super cool as shit on the east.

It wont cost me anything to try it so why not?

Lucky! Weirdly my original “free” purchase didn’t take, probably also a reason I didn’t get into the early stages. Oddly I still rarely get any marketing stuff for the game.

With all respect, and absolutely zero snark, I have yet to see anything about New World which has caught my interest.

Maybe it’s the quasi-historical setting? History doesn’t typically appeal to me in my gaming — but so far, the game simply hasn’t called to me at all.