While the biggest reveal isn’t until later tonight, that doesn’t mean Warframe players aren’t being treated to tons of tasty tidbits at TennoCon 2020. The art panel was bursting with reveals and sneak peaks of many new warframes, skins, and infested-themed pets, monster, weapons, and more. Here’s a round up of the highlights of the panel – be sure to scroll to the end for a detailed gallery of all the new art showcased today!

Xaku: Broken does not mean bad

END_OF_DOCUMENT_TOKEN_TO_BE_REPLACED
Over the past few months, the community has been working together with Digital Extremes to create a new warframe. The winning concept was The Broken Frame, a void-corrupted frame that resorts to using the parts of other warframes to build itself. Fans have seen early concept art before, but during the panel today devs showed off a finished iteration, complete with armor that floats atop its pulsing body. Called Xaku, this will be the 44th warframe to launch in Warframe. At release, it will also have an alt helm available (that resembles a man-bun) as well as two signature items — a broken syandara and a broken warfan, a take on old Japanese paper fans that could be used for defense. 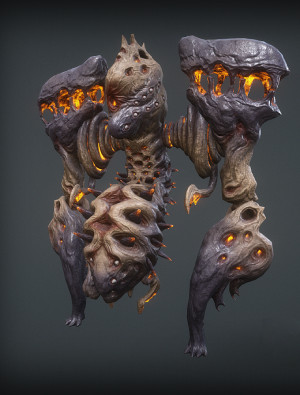 Warframes of the future

After this community creation comes to life, the next warframes in line for release are both created by community artists brought on board to develop their ideas. First is the Alchemist, a concept created by Nikita Leshakov. This frame is a mad scientist type. The final warframe to launch this next year will be The Wraithe by Liger Inuzuka. Fans may remember this concept was introduced long ago, and devs offered an update.

The team also updated players on work on the Gara deluxe skin. However, what really caught my attention was the new Hydroid deluxe skin the studio showed off. With a sleeved-jacket back piece that moves like water (so fitting), a new look even for Hydroid’s Kracken (so fun), and a new deluxe spear (so pointy), Hydroid has a complete deluxe look going for it. Additionally, there is a new squid pet that just tops off the look of this space ninja pirate.

With an entire expansion dedicated to the infested, it makes sense that the art panel would focus on lots of images and video of infested things. The devs did not disappoint. We have infested monsters (not the least of which is the butt-smashing infested femur), infested weapons (take a gander at that infested arm cannon and those claws!), and a trio of infested companions. Ironically, the infested canine kubrow looks more feline, and the infested feline kavat looks decidedly canine. My favorite is the kavat, whose whole face splits open whenever it opens its jaws. And finally, there is a new infested domestic drone that skitters along the ground. I can’t wait to see that in game!

Additional art shared with players includes a look at Nightwave items, and a few new weapon skins. if you didn’t have the chance to catch the panel, or maybe you just want a longer look at the new art, check it all out in the gallery below.

The Broken ‘frame looked okay in concept art, looks so much cooler in its final model with translucent energy conduits instead of glowing vines. And oh my gosh the skeleton form they demoed when it dodges or uses its ult!

But I’m more excited for the Alchemist, aka snek-frame :)

And those new Infested enemies are wonderfully creepy.

Xaku definitely looks a lot better once you can see everything in motion. And I did like the skeleton form, it seems like a neat idea. The part where that power gives significant damage reduction probably won’t hurt, either.