Let’s see… I was flung across the world, I fought an extremely hyperactive unicorn bro, I nearly got defeated by chickens, and I fought a monstrous tree stump that spoke only in puns. And that was just the beginning of my AdventureQuest 3D adventures.

To be honest, I was expecting plenty of silliness. I used to play this game back when it was a Flash-animated single-player title (especially its sci-fi counterpart MechQuest) and unabashed goofiness is the norm for games put together by Artix Entertainment. That said, starting off things with having my character being brutally beaten down by the main big bad only to get back up every time for more really took me by surprise. It also set the stage for how my life (un-life?) in the world of Lore was going to play out from here on. 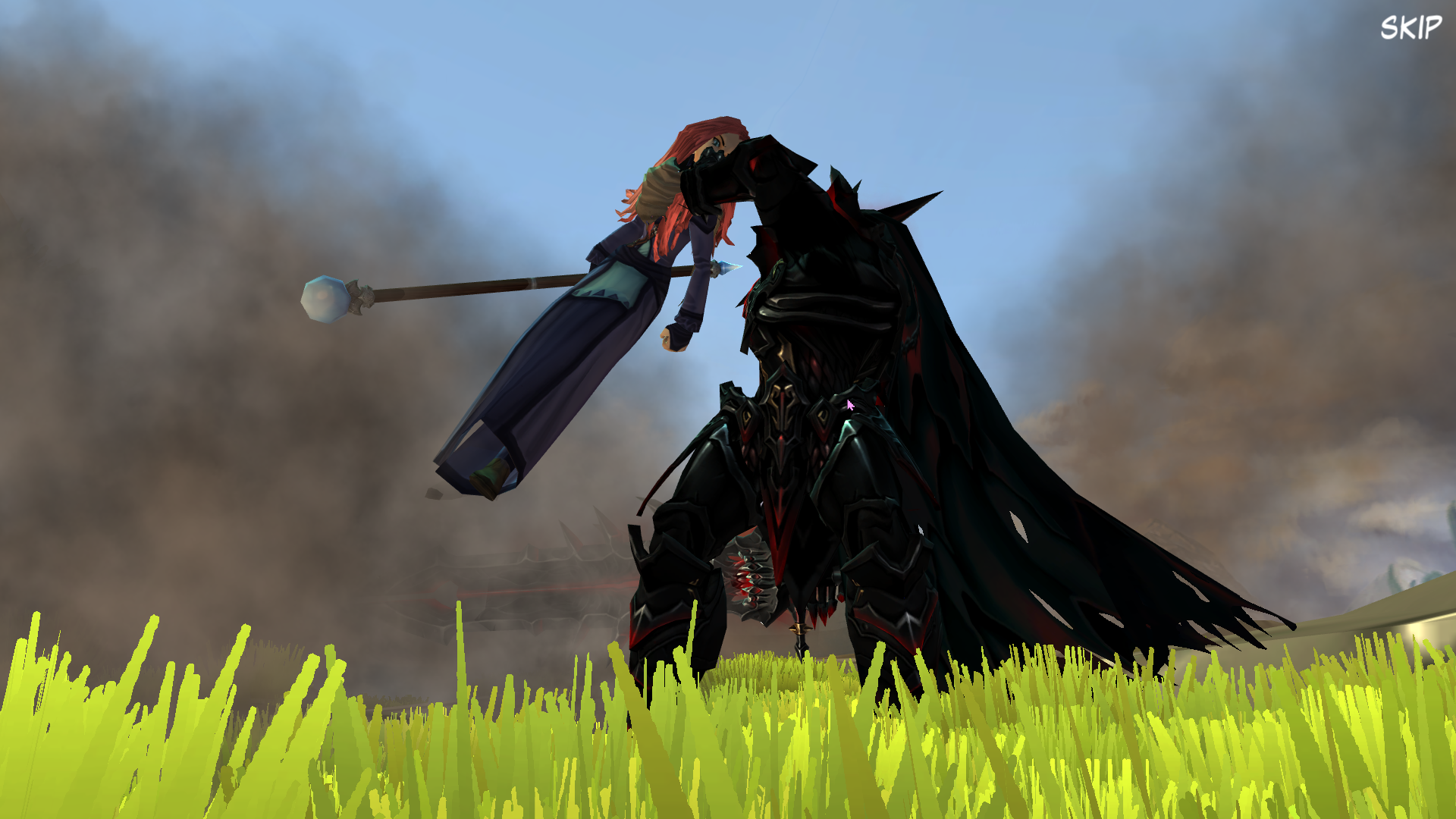 After this righteous whuppin’ and getting flung across the world finished up, things in AQ3D pushed on pretty much as expected from a themepark MMO standpoint. You get quests, you follow the arrow, you complete the laundry list, and then you turn it in to the NPC for rewards. For once, though, I didn’t blast by the quest text, mostly because I knew it was going to be extremely fun to read.

What isn’t extremely fun, though, is the Moglomancer. I was expecting a pet class and so I was pleasantly surprised that it wasn’t, as the class simply draws upon the strength of Moglins to enhance melee attacks. The problem with this, though — and likely a problem that’s borne of my initial selection of being a mage — is that it’s an extremely soft class that right now doesn’t feel like it’s dishing out damage enough to outpace the pain received.

There are a couple of other skills that sort of help, such as a Moglin summon that heals for every weapon hit, but these heals are single digit and incremental at best, and keeping the skill active chews through mana until I swap to another summon that recovers mana with every hit. The combat rotation, then, tends to be an attempt to put out raw damage as fast as possible using the damage buff Moglin summon, then alternating between the heal strikes and mana recovery strikes in a war of attrition that hopefully goes my way, resulting in a class that has the sort of gameplay of a tank while also feeling like its made out of papier-mâché. 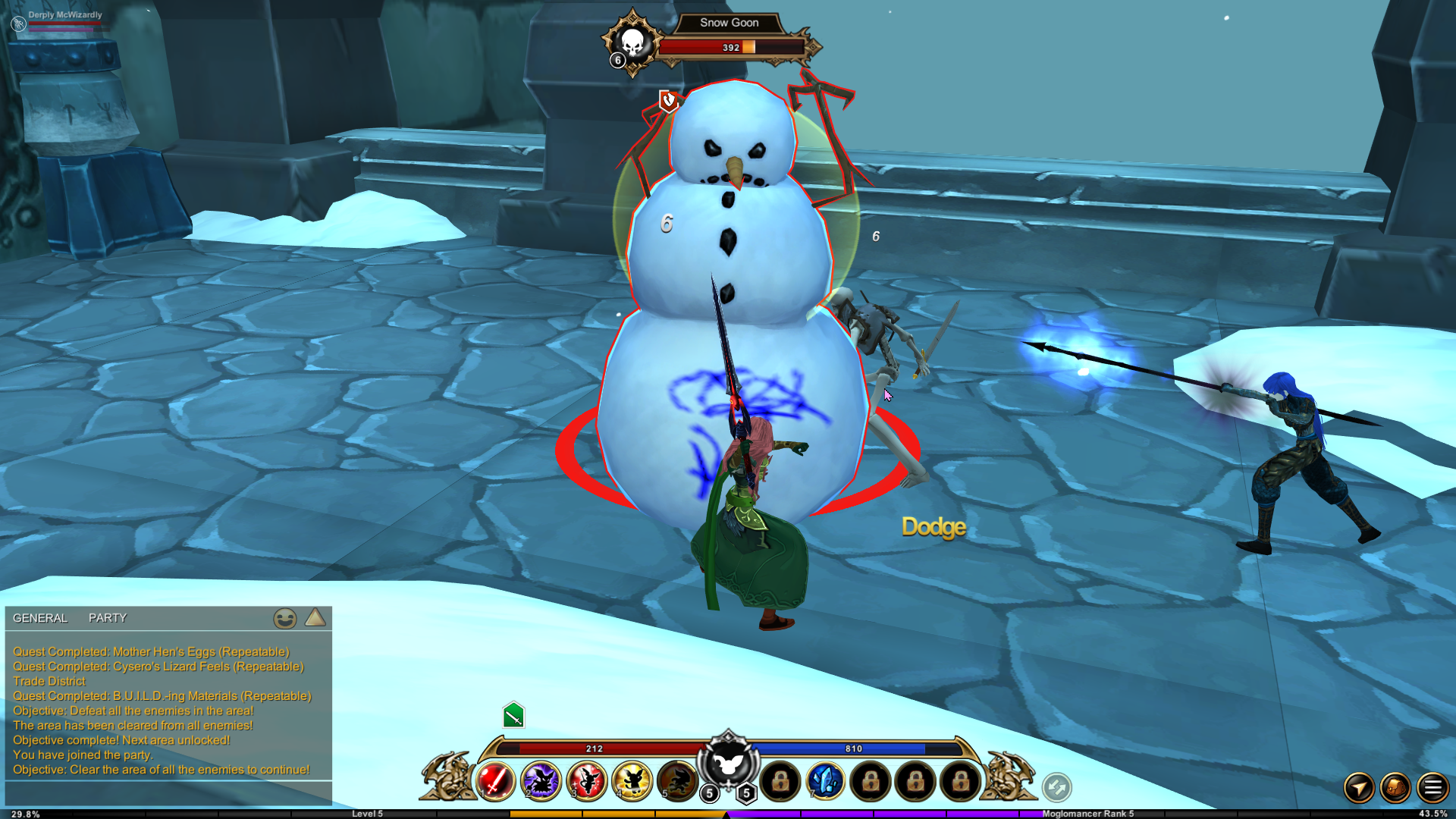 What kept me going through this not particularly fun class and routine gameplay beats were the extremely fun and amusing quests. No Artix Entertainment game has ever really captivated me from a pure gameplay standpoint and AQ3D doesn’t either, but the world of Lore and the completely madcap adventures my character has been going on and the things she’s fought have made all of the other pain points extremely easy to tolerate.

I entered a cavern that was full of extremely deadly chickens, as well as one massive chicken boss that took forever to beat. I fought the Brutalcorn, a bro that bellowed challenges at me. I was locked in an alarmingly long series of quests at a barber shop, with one of the quest steps requiring that I take out a giant hair monster 10 times over. I went to a dark and brooding landscape and farmed critters to craft a weapon. I fought a goblin that tossed entire treasures over the side of a treehouse in order to keep the beloved crates instead.

These are just some of the “routine” quests I’ve taken up as part of the overall regular storyline, with step after step of completely goofy antics with every NPC spoken to and every step forward. It’s an Artix games signature and I’m here for it. 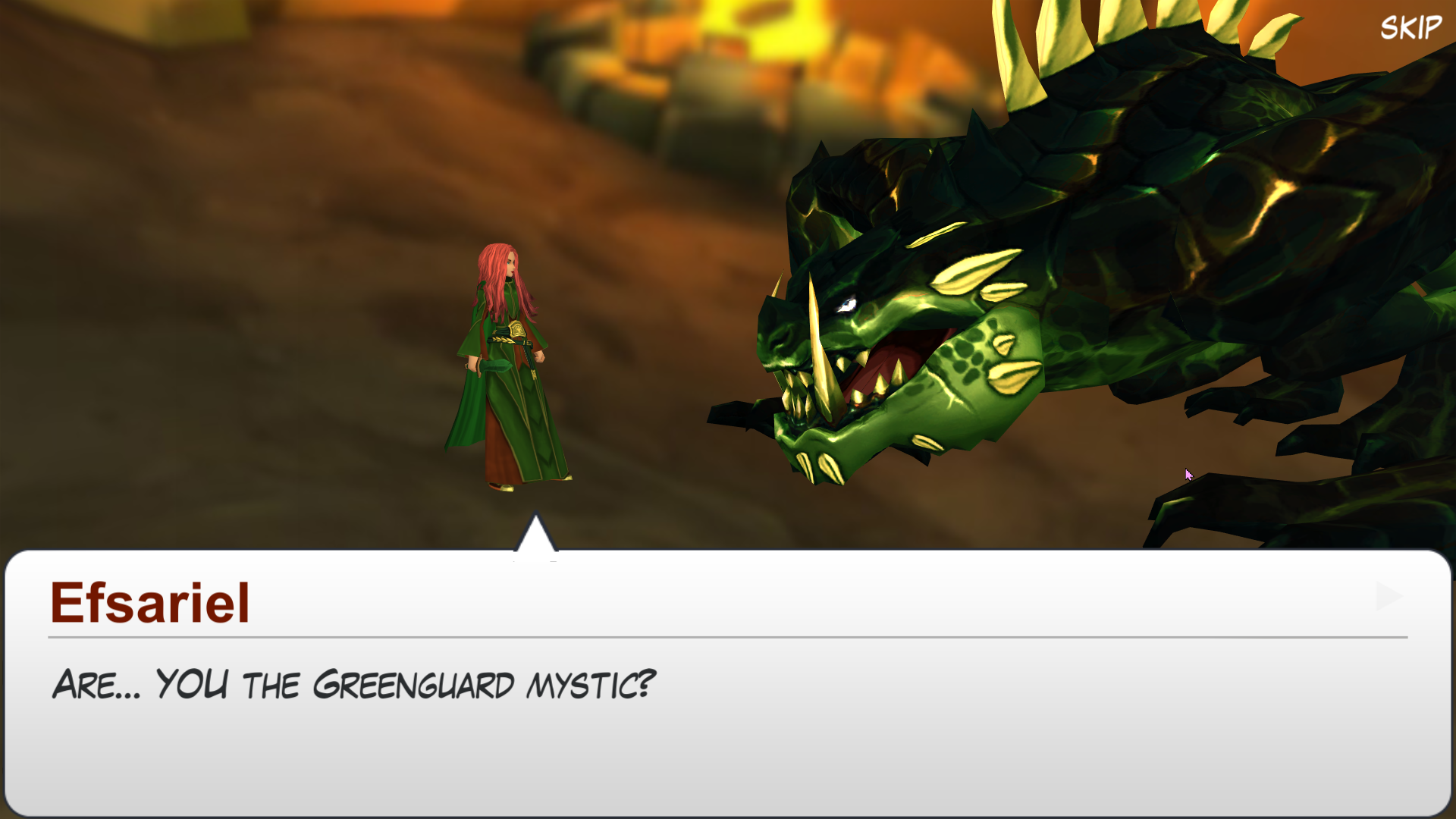 Another Artix games signature that I started to run in to was the long-running grind for some simple things. The aforementioned weapon required a pretty long string of monster killing to get the needed materials. At one point during the barber shop quests I was instructed to kill 100 Fashion Zombies in order to get a cosmetic weapon skin. In fact, that barber shop quest line was done in order to try to grind out the gold needed to pay for the weapon upgrade. There’s lots of reasons to sort of run one’s face into the belt sander in AQ3D.

That said, I don’t particularly mind it all too much right now. Like I said, this is stuff that I experienced back in the Flash variant days where I would constantly take on the same fights over and over in order to outfit my Mech with an event weapon. And the gameplay is simple enough that I entered that sort of zen-like grinding state where I would just play some music and clear my chosen tasks.

It’s yet to be seen whether this sort of thing will keep cropping up as I push forward, but I’m willing to bet that it will, and considering some of the looks that one can unlock as a result of sticking to these grinds, it can feel pretty much worth it; my character now has a hairstyle that’s as silly and nonsensical as this game is. 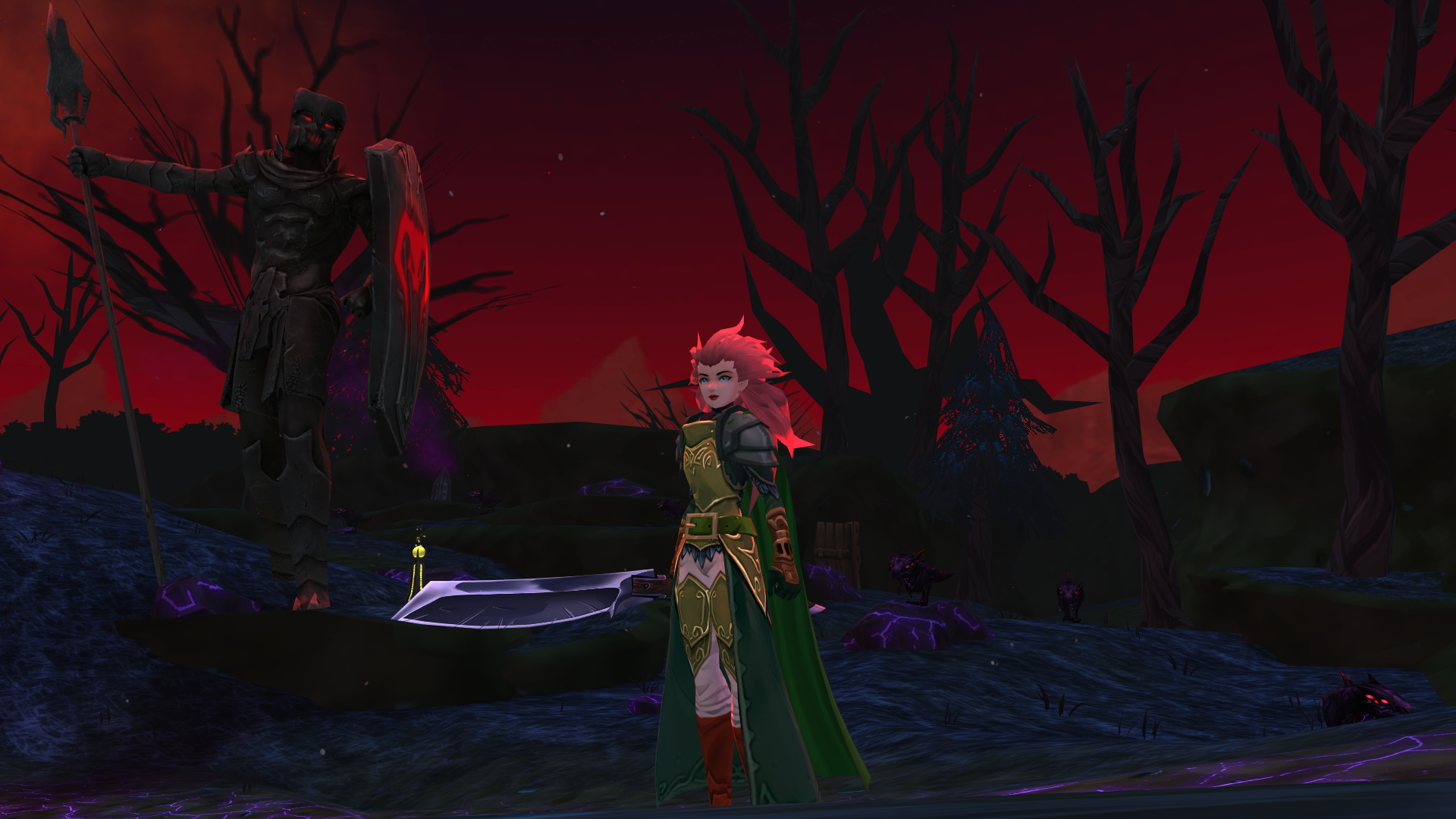 As of right now, I am level 5 and rank 7, and since this is a themepark my options for polls are a bit thin right now. I would add a poll choice for whether or not to choose a different class, but for the time being I’ll stick it out with the Moglomancer and perhaps revisit that option later. That said, there is at least one poll option I can offer.

Right now the path of content seems to be focused on one of three things: doing odd jobs around town and on the job board, taking up random adventures, or following the overarching narrative and pushing onward. So, that’s the question I’m putting to you all. 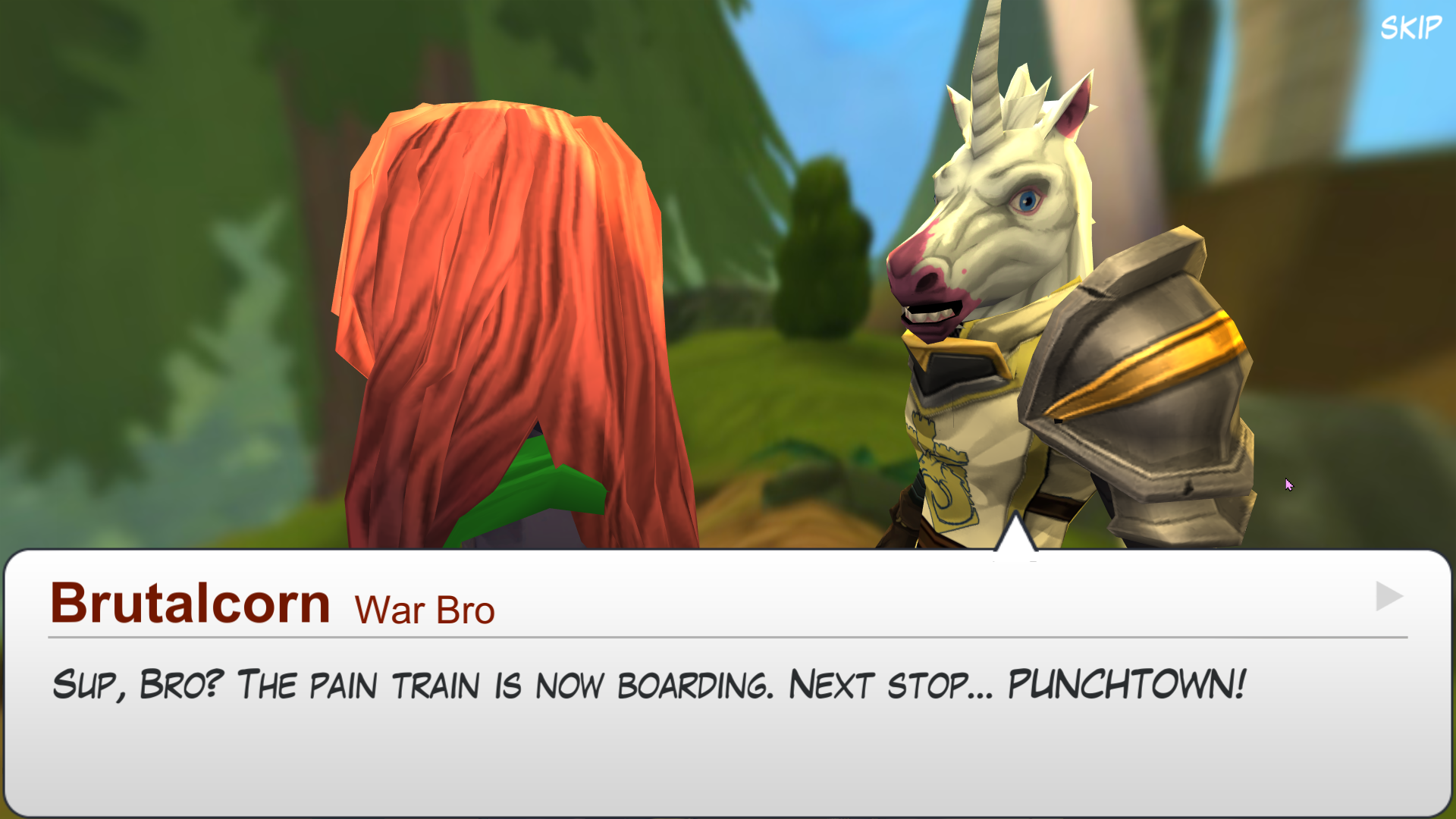 As ever, polling will wrap up at 1:00 p.m. EDT this coming Friday, August 7th. In the meantime, I think I’ll keep this one on the shelf and see how voting unfolds. Hopefully the Moglomancer will begin to grow on me.

I love this game!!!
Moglomancer is fun/silly class to play, but can be a little tough solo since you actually have to pay a little attention instead of just spamming skills. It makes an ok support class when in a party though, since the bluffs also affect nearby party members.

You should definitely check out the concert!!

You should unlock your Ranger! I’m loving that class. It’s what finally got me playing the game more regularly.

I’ve not tried the Moglinmancer, but I’ve heard it’s not the easiest to master.

I would like to see an option in these lists for “Move on to the next game!”

Sometimes, the chosen one seems to have not much interest for myself, and perhaps lots of other folks as well.

Pointless to continue if no one is enjoying the experience. :)

The AQ3D community is extremely supportive of MOP, financially and otherwise. The last poll had 120 votes. I’m sure there are a lot of readers enjoying it.