Yesterday, the Wall Street Journal published an explosive piece that compounded the ongoing Activision-Blizzard sexual harassment and discrimination lawsuits and scandal. The Journal detailed accusations against CEO Bobby Kotick himself, including the fact that he threatened to have an assistant killed, as well as asserted that he knew about but withheld multiple incidents and lawsuits at Activision from stockholders. The report also included quotes from former company executive Jen Oneal, who quit the company after a three-month stint co-heading Blizzard, during which she said she was “tokenized, marginalized, and discriminated against.” The exposé led to a walkout by Activision-Blizzard employees yesterday and demands from the internal workers alliance, A Better ABK, that Kotick step down or be removed under his own “zero tolerance” policy. Kotick refused, and the ATVI board of directors issued a statement supporting him.

So it’s the stockholders who are adding their angry voices today, or at least some of them. As first reported by the Washington Post, a group of shareholders have issued a letter demanding that Bobby Kotick resign, along with Chairman Brian Kelly and Lead Independent Director Robert J. Morgado, the two longest-server board members.

The group is led by an organization that will be familiar to our readers: It’s the Strategic Organizing Center Investment Group, formerly CtW Group, which is essentially the “shareholder engagement arm” of a coalition of labor unions with long-term investment in pension funds, including the union supporting Activision-Blizzard’s own workers alliance. The group has watchdogged Activision-Blizzard, along with several other companies, on the topic of executive pay and labor abuses for years now.

But in this call to action, it is not entirely alone. The letter demanding the ousting of Kotick, Kelly, and Morgado is signed by multiple shareholder groups, not just SOC, including SHARE, NEI Investments, Verve Super, and Future Super. Together, the groups say they are “Activision Blizzard, Inc. shareholders representing $329 billion in assets under management or advisory.” WAPO dug into the specific investor groups acting as signatories here, noting that some of them represent Canadian and Australian investor funds and at least one holds no shares. Apart from NEI, the shareholders speaking up here are relatively small compared to ATVI’s largest investors, like Vanguard and BlackRock; NEI has apparently been decreasing its exposure in the company since July.

“We, the undersigned, write to you as Activision Blizzard, Inc. shareholders representing $329 billion in assets under management or advisory. Our company faces an unprecedented workplace crisis of its own making. As new reporting indicates, and in contrast to past company statements, CEO Bobby Kotick was aware of many incidents of sexual harassment, sexual assault, and gender discrimination at Activision Blizzard, but failed either to ensure that the executives and managers responsible were terminated, or to recognize and address the systemic nature of the company’s hostile workplace culture. Moreover, and despite numerous government investigations, settlements, and top executives’ departures that have negatively affected both the company’s public reputation and its share price, the board has been almost entirely silent. We, therefore, call on Mr. Kotick to resign as CEO of the company, and on the board of directors to take responsibility for failing to recognize and address what the California Department of Fair Employment and Housing has described as a ‘frat boy’ workplace culture to flourish. In order to ensure that the board has leadership capable of leading this effort, we urge Chairman Brian Kelly and Lead Independent Director Robert J. Morgado to announce their retirement no later than December 31, 2021. The board should start a search for more qualified replacements immediately.”

The groups also call for a genuinely independent review of workplace practices, which thus far has not occurred, along with a refreshment of the board for diversity and inclusion, and/or the “reduction in total CEO pay in [Kotick’s] employment contract for at least five years and auto-renew it if the stated workplace goals are not met.”

It is unclear whether these groups will find traction with their fellow investors, though the fact that ATVI has lost almost 30% of its stock value in half a year and investors came within a hair’s breadth of successfully challenging executive pay earlier in 2021 might be a clue. 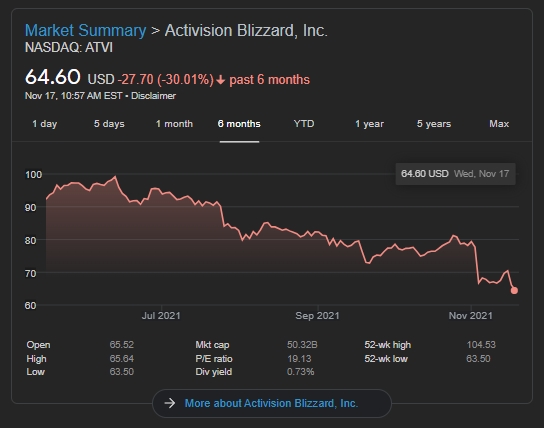 Today over 500 current ABK employees and contractors signed a petition calling for the removal of Bobby Kotick as our CEO https://t.co/QP9sOJ76bK