It has been a long week for the developers and followers of Shroud of the Avatar. The problems began when developer Catnip Games sought to put out Release 106 at the end of September, but a housing lot bug caused the game to be forced offline. Worse yet, the in-testing build rolled back as far as August.

We can now confirm that after some additional QA testing, R106 has indeed come online over this past weekend, but the game is online with that rolled-back database just as players feared might happen; the features of R106 are available, but character progress is not, while fixes and stipends appear to still be in the process of being handed out.

Community manager Ravalox was left to deliver the bad news:

A rollback is like using a time machine. When the Live game server was restored and brought on-line, all progress, stats, etc. are as they were on August 24th at 8am CT. This impacts the following in addition to other aspects of your character’s status:

New Characters: If you created a new character during this window it will be missing, please re-create the character and reach out to support for assistance in having any earned XP reallocated to your XP Pool.

Skills: XP has been placed on your account in the XP pool. We are unable to restore XP to specific skills, so any skill level changes to your character will need to be re-trained.

COTOS/Website Purchases: Any COTOs or store items purchased from 8/24 – 9/29 and throughout the outage will be (re) delivered via the Rewards Chest in game.

Houses/Lots: If you claimed a lot or placed a house during the period of time the rollback covers, you will need to reclaim.

POTs: IF you upgraded or purchased a New POT during the time frame, we are working to re-apply the new or upgraded town to the game.

NOTE: We cannot restore decoration work done on lots or in POTs.

Taxes/House expiration timer:
We have suspended the eviction timer and will keep that in place until at least November 18th. During this time we will be working to determine the best feasible way to address back taxes.

If the deed was obtained prior to 8/24 @ 0800 CT then the deed should be where it was previously: in your bank, Inventory, or storage.

Messages within SOTA’s Discord offer a bit more information on R106’s rollout. Subscribers are getting R105 and R106 rewards in one bundle, September and October login rewards are being bundled together, and some special items are being handed out on top, such as a special title to mark the affair.

The game’s community manager also confirmed the devs are working on integrating gold recovery and helping players with re-purchasing things that were on sale. “We understand we cannot recover and return your time to you. Thank you for hanging in there with us over the last week,” reads the message. “This was the storm before the calm. […] We are not done.” 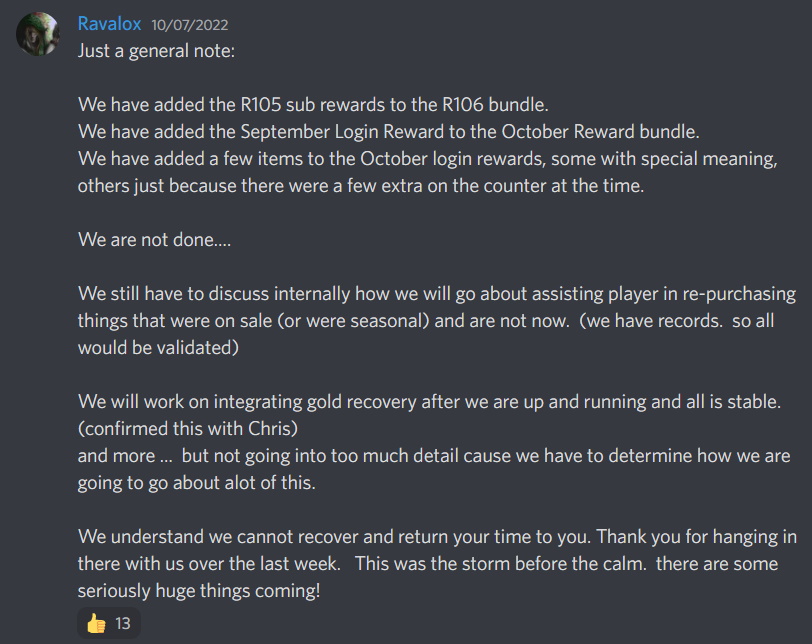 sources: official forums (1, 2, 3), official site, Twitter (1, 2), Discord
Longtime MOP readers will know that Shroud of the Avatar is a controversial game in the MMO space. Kickstarted in 2013, the project has been criticized for cutting promised features, crowdfunding excessively, delaying Kickstarter rewards, obfuscating its corporate leadership and office status, and neglecting SEC filings legally required by the game’s equity crowdfunding. In 2019, Richard Garriott company Portalarium sold SOTA to its lead dev and all but exited the game. Press inquires were met with stonewalling and insults, and equity crowdfund investors were abandoned without notice or any semblance of accountability; moreover, the groups are now building a blockchain MMO. SOTA itself does still have a tiny playerbase and is technically still receiving minimal development.
Advertisement