If you’re looking for an alternate vision of futuristic science fiction, you would do well to dive back into the worlds of 19th century author Jules Verne. His forward-thinking designs and stories influenced movies such as Back to the Future Part III and theme parks such as Euro Disneyland and Tokyo Disneysea.

Jules Verne’s imaginary worlds also became the inspiration behind an exciting MMORPG that we never actually got: Lost Continents. Announced back at the beginning of the millennium, Lost Continents teased players with an amazing setting: “Somewhere from a world of myth and mystery will rise an epic hero… you!”

Today, let’s take a look at this genuinely neat game and mourn together the fact that we never got to actually play it. 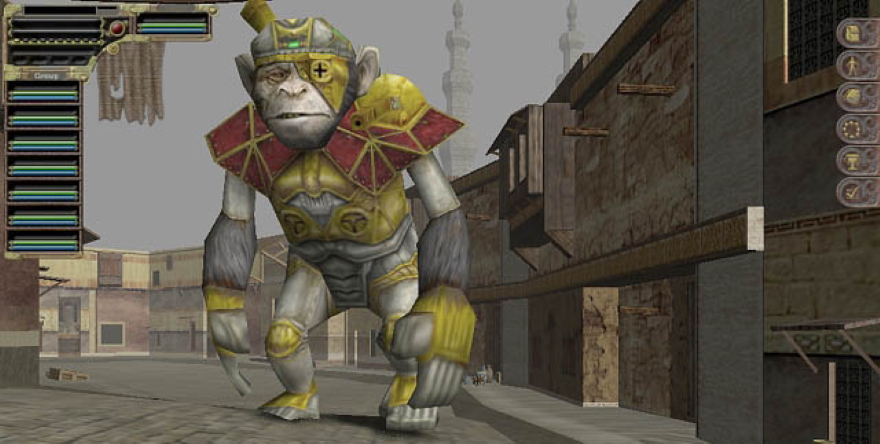 Back in 2001, a Colorado-based studio named VR1 Entertainment sent out a press release announcing that an ambitious project called Lost Continents was underway. VR1 was already a proven entity in the field, having produced a title called NightCaster for the Xbox that same year.

“[Lost Continents] is inspired by the classic adventure stories of Jules Verne and the pulp adventure serials of the 1930s. Players will assume the role of a hero, and they will explore lost cities, fight off supernatural and sci-fi creatures, and uncover mysterious secrets,” the release said.

The concept of Lost Continents was to merge together the steampunk scifi with the pulp adventures of the 1930s. Basically, it was “Jules Verne meets Indiana Jones,” and if that doesn’t get your imagination roaring, then you have to be legally dead.

Some of the innovations that VR1 touted with this game was private instances (which weren’t common back in 2001), an ongoing story arc, interactive elements that would challenge players’ skills, and broad character development.

“We’ll be taking the genre in an entirely fresh direction with its setting, and with the addition of Private Zones™, we’ll bring the game’s focus onto each individual player.” said VR1 Executive Producer John Blakely in 2001. And yes, they trademarked “private zones” there. The idea of these instances was to allow for permanent change to happen to certain areas for storytelling purposes, as well to combat “anti-social behavior” that the team saw happening in open world MMORPGs.

The team was pretty psyched about the possibilities. In an interview, it shared some of the vision of how the game might function: “Dramatic fights on a moving vehicle are a staple of pulp adventure, so you’ll definitely find yourself battling evil in a zeppelin far over the lands below and we’re working with the idea of combat on a moving train […] You won’t be walking through a tunnel and find yourself entering a new zone. Instead, you’ll board a plane or boat or hop into a jeep and watch your travels across the map of Africa as the red-dotted line makes its progress.”

The core gameplay loop of Lost Continents revolved around “expeditions,” which were instanced quests that offered a variety of possible solutions.

“While many expeditions will involve combat, there are multiple answers to every situation,” said VR1’s Keith Baker. “Where the burly hunter may try to fight his way past the guardians of an ancient tomb, the clever archaeologist may slip past the guardians, dodge the traps, grab the treasure, and escape without firing a single shot.”

Initially, Lost Continents was slated for a 2003 release, but the project didn’t make it that far. In April 2002, just five months after its initial announcement, VR1 sent out a press release in which it said that it was suspending development of the MMORPG after two-and-a-half years of development at the pre-alpha stage. This is, of course, why you’ve never heard of the game.

“While we believe strongly in the viability of the game, it is a massive undertaking and the company is taking a step back to evaluate whether we’ll be able to do it justice,” the announcement said. “The Lost Continents team extends our heartfelt thanks and apologies to the many fans that have gathered in the scant few months since it became known that we were working on the title.”

There was some slim hope that VR1 might have figured out a way to resume development after that point. The studio said that summer that it had been “surreptitiously working on Lost Continents” following layoffs, but nothing else came after that.

If you’re curious about this game, you can revisit its now-defunct website courtesy of the Internet Wayback Machine and listen to brief bits of its music over at RPGdot.