Destiny 2 players are… actually probably playing something else right now, if my own spouse is any guide, as the game suffered a nasty outage last night that’s continued to this morning.

Yesterday, Bungie announced that it was pulling the game offline to “investigate an ongoing issue causing certain Triumphs, Seals, and Catalysts to lose progress for players.” A few hours later, the studio said the investigation was still ongoing, and then just before midnight on the east coast, the team admitted it wouldn’t “be resolved tonight.”

“We are estimating a timeline of 3-4 AM PST tomorrow, January 25, for our fix to get deployed,” the studio wrote overnight. “Timeline subject to change.” That’s 6 or 7 a.m. EST, so basically as I’m typing this. The downside is that Bungie also said it’ll be “rolling back all player accounts to their state as of 8:20 a.m. PST, prior to hotfix 6.3.0.5 going live.” That’s a rollback to yesterday morning, mind you.

The Destiny 2 Reddit is… well, grumpy, but more chill than most gaming Reddits after their game is offline a day and has suffered a rollback after a major patch malfunction. We’ll update when Bungie posts more this morning. 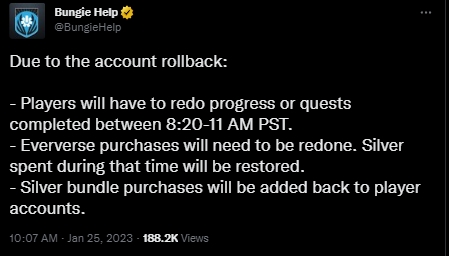 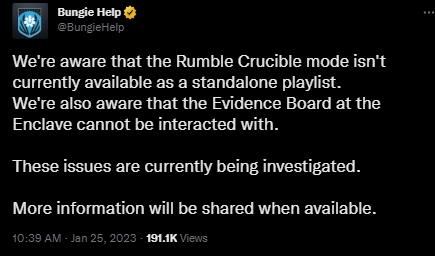