Last week I checked in with indie airship battler Guns of Icarus, and I figured why not check in with the dev team at Muse while I was at it. CEO Howard Tsao graciously fielded my questions about GoI’s upcoming PvE mode, and he filled us in on everything from enemy AI to factional gameplay to new airships that are coming soon.

Join us past the cut for the full interview.

MassivelyOP: How’s work progressing on the PvE and adventure mode side of the game? Would you say that Alliance Mode is one of the more challenging developmental tasks to this point?

Howard Tsao: After a long struggle, we’ve recently been making a lot of progress and are looking to start delivering prototype builds to our Kickstarter backers very soon. We’re testing from the ground up, starting with our game modes. Introducing PvE has had significant impacts on our core gameplay, so we want to tune the formula just right. It’s been a long road!

Alliance Mode has absolutely been the most challenging project we’ve undertaken. You would think a DLC is a small endeavor, but in fact it’s been the largest project for us to date. Adding AI behaviors to enemies is no small task. Our team has been spending the bulk of our time refining these mechanics. 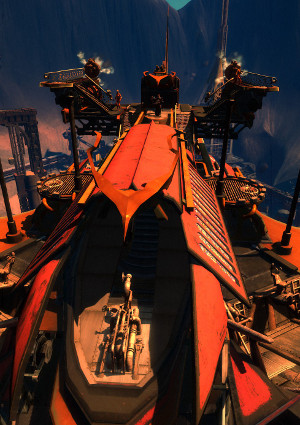 It’s been a long process of research and constant testing. We’ve been looking at our existing player base and their strategies and trying to teach our AI to do much of the same. People can still expect some pretty wild airship combat, but this time against AI enemies. Not only are we thinking about each enemy, but also what the entire enemy team is doing. We’re measuring player tension and scaling difficulty based on how well each match is being played. There’s going to be a good degree of variation from match to match to keep things exciting. Think about games like Left 4 Dead, they’re serving as excellent examples and inspirations for us.

On top of that, we’re bringing a larger sense of progression into the game. Players will be able to fight for unique factions and make an impact in our new world progression system. Players will be battling on three different game modes, with more to come in the future, to aid their faction in dominating the world. We’re looking to fill in the gaps in the current game with this DLC for a more complete game world experience. People will have more to fight for now, and much more at stake.

Do you have any plans for new ships or ship types in the near future?

Definitely. Not only will Alliance have new AI enemy ships, fighter planes, and bosses, but there will be a variety of new player ships as well. When players fight against each faction, they’ll have their own visually distinct set of enemies with varying strategies. For example, you’ll want to approach the Anglean Republic differently than the Fjord Baronies. New player ships will also be visually faction-themed.

Have you thought about tuning Guns of Icarus for high visibility competitive play in order to grow the player base? Do you think that the squad-based tactics and the relatively slow pace of matches would have to change in order to appeal to a large audience?

That’s something we want to do more of. We have a small but dedicated competitive community, and players regularly host and stream competitive events. Growing this has been a challenge, since neither our team nor our player base is very large. So far, the competitive matches are very tactical and skillful (so much so that when we participate in competitive events we usually get creamed). Pacing wise, we are slower paced with squad-based tactics, but competitive matches generally last no more than 20 minutes. To accentuate combat and engagement, we added a new feature some months ago called Stamina, and it enables Pilots to give their ship an additional short burst of speed to engage and disengage combat much more easily. Gunners and engineers have their own stamina boosts as well to intensify moment-to-moment fighting and repairing.

We have a few talented players who’ve been helping us stream, and they’ve done a good job capturing the tension of a competitive match when teams are searching each other out and positioning before an ambush or onslaught. People have been having fun with competitive play, but we’ll also need to do a lot more to support and grow the community.

It’s been pretty surreal to have gotten this far, and I’m truly humbled. Given that we were once told/threatened by a publisher that they would copy the game, launched in the middle of a hurricane, and survived DDoS attacks, we definitely consider ourselves to be very lucky. And if we get to support and grow the game til the summer of 2018, we could look back in old age (by gamer standards, we’d think 6 years is pretty old!) with a lot of pride.

In addition to growing the very core of the expansion, with new PvE game modes, AI enemies, player ships, and weapons, we’re also putting a lot more emphasis on new ways to progress in the game via factions and the world. When players take over territories and go to war with other factions, our systems will be recording these and logging them into the annals of history. Maybe a certain clan made a contribution to the Arashi League in this war. We want to remember that and allow players to craft their own stories around these events. It would be amazing to look back in 2018 and see how the player history of the game evolved over the space of three years.

And hey, if three years from now, if people see a whale in the sky, who are we to argue.

Sounds great, thanks for updating us!