So it finally happened. Really and for truly! Landmark launched into the realm of released games. I can officially remove the alpha/beta tag off this column. But other than that, what does launch mean? How did it go?

Other than the game being offline for a couple days, it felt very business as usual. There weren’t any major crashes or load queues that I personally experienced (granted I also didn’t try to play the days that there were network issues that prevented logging in on multiple Daybreak games), but there also weren’t really any mega wow-factor features. Except for having to experience character creation — and all those subsequent a Luminary was made messages each time someone else did so — I might have not been able to really distinguish launch from any other day. 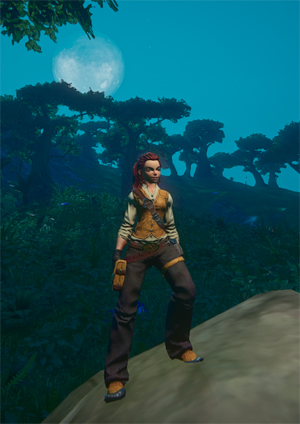 So one awesome thing was that I got to finally make my character for real. No more wipes! Sadly, unless there was one more hairstyle slipped in (I checked, but didn’t notice any), there wasn’t anything new to character creation. No new races; no new options. Things are still pretty limited. I can always hope that there will be more robust options later, but you’d think launch would be a great time to implement that, especially since players have to stick with the first character they ever make if they want to keep their reimbursements for all items and Marketplace purchases; rerolling even once will strip your account of those things as the reimbursement goes only to the first created character.

Luckily, there is some good news on that front. The main new thing I experienced for launch was the addition of a special barbershop. For the price of a few Lumens (which are gathered during gameplay), players can change all the appearance characteristics of their characters at will. Tired of your hairstyle? Grab a new one! Recolor your hair – or eyes – for a special party. The only thing you cannot alter is the gender of the character you made or her the size. This gives me hope that more options are definitely in the works, and the devs are making sure players don’t lose out on their stuff when they decide they like the new looks better and want to change. I can definitely appreciate this.

One thing about character creation that I think needs to be fixed immediately is that horrible announcement that is broadcast to the entire game each and every time a player joins the game with a new character. Especially at the beginning, it was spammy and distracting and annoying. There are a few character names I wish I could unsee! This also occurs each time someone crafts certain weapons. I’d rather see and play the game without having LEETPWNERbutts has become an Assassin! thrust in my face.

Starting over one last time

I admit, for the last little while I have just not been very enthused about Landmark. I couldn’t log in often. That’s pretty normal when an impending wipe looms. I still enjoyed the game, but I just didn’t have it in me to devote more time to doing stuff that was going to be gone again. There was just so much else I could focus on. But now, that excitement is back! From here on out it is all for keeps, so I was definitely more energized to dive in and begin my life again. Harvesting was fun once again since I wouldn’t be redoing the same stuff over and over. Now I need it all.  All the resources are belong to me!

One I logged in during the head start (and had my own personal message broadcast to everyone), I was pleased to find that the Pioneer Island bug that plagued me the first time it was introduced was fixed. I did indeed get a totally flat claim on the totally flat island. Not that I plan to build there, but it was nice that I was granted it since you cannot replace a claim there if you don’t have one. I personally find the flatness to be unappealing; I can see where it will really help brand-new players flexing their building skills for the very first time, but I also wonder if it might be a real visual turn off. How many will look at the lackluster landscape and think, blech? How long before they know they can travel to the more diverse islands and see the variety of biomes out there in the world?

While a launch that didn’t make me wait for hours to get in because of crashes or load queues was really great, that doesn’t mean everything was perfect. The main server I was dumped on, Determination, was pretty laggy since every Luminary was being born there. That was mostly remedied by just moving to my preferred one, Serenity. The game definitely didn’t feel very optimized, though, as even my main gaming rig was experiencing less-than-ideal FPS. Is there still going to be an optimization pass? While I definitely want one, the idea of it scares me a little since doing that sometimes causes major issues that necessitate a do over — and I do not want any more wipes! That would be very very bad for Landmark. I know my enthusiasm would be severely curtailed if I had to start over yet again.

The main bug that I was bitten by involved the chaos caverns. A friend found an absolutely stunning coliseum… or so he said. He logged out at that outpost, and then when I logged in, I teleported to him to behold its awesomeness. Unfortunately, another outpost also spawned on top of it! So in the middle of what was a massive and intricate build, there is another build set down, destroying huge chunks of the first. It was a mishmash of angles and styles. Why a second outpost randomly generated right on the first we have no idea, but it made me a sad panda to miss out on the grandeur of the coliseum that I heard so much about. Am hoping my next trip in allows me to see that coliseum untouched. (I also hear it is absolutely crawling with mobs, so I will make sure to have a friend or two with me before that return!)

Although the launch itself was pretty humdrum and lackluster (not always a bad thing), I am excited for the start of Landmark. I look forward to finally realizing my underground maze adventure. I’m excited to delve deeply into the storytelling features, and unlike naysayers and Steam reviewers, I am confident this system — and the game itself — will continue to get updates. There’s already been a really big patch with some changes and a hefty dose of bug squashing.

If you haven’t experienced the outposts in the chaos caverns, you are missing out on a chunk of Landmark’s new PvE. All these player-designed places are populated with NPCs of various races to give a real dungeon dive to those who prefer to adventure than to build. And finding treasure chests is awesome for anyone! I’ve been having lots of fun in them with friends. Of course, I still like experiencing player-made dungeons, and more are cropping up all the time. I can’t wait to see what all there is to do as time goes by. I already found Fippy Darkpaw storming the Qeynos gates!

I am very happy to be here to experience Landmark. Will you be joining me? If you are, look me up: I’m Emy in game. The game is buy-to-play and is now on Steam. See you there!