May I respectfully make a request to my fellow gamers? Let’s lay off the hate. It’s time to for us to throw down that torch (extinguished, of course!) and and stop trying to burn down the gaming industry. Let’s stop trying to tear things down before they actually crumble and we lose it all.

I could very easily be talking about just any game, but today I am focused on Landmark. The formally-known-as-voxels sandbox had had a fair share of hate heaped upon it, sometimes deservedly so, sometimes not. But it has continued, and in cases this hate is to an extreme that is not only unnecessary but damaging — to the industry, the community, and even the haters themselves.

That is not to say that we shouldn’t hold studios and developers accountable. I am not saying we shouldn’t express disappointment. What I am saying is there reaches a point when we need to move on, to focus instead on how the studio is making strides to improve Landmark. Sure, there may still be missteps, but the game is going in a positive direction. And that is a good thing! So let’s hear more about that. 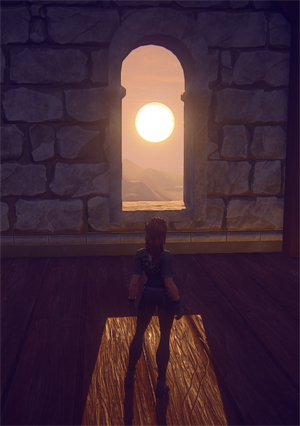 Don’t feel like trusting Daybreak after the past year and a half? That’s understandable. Much has happened in that time, including plenty of squashed dreams. It is also a given that re-earning any type of trust and goodwill is a long and arduous process. And to its credit, Daybreak is working on that. Maybe not in the way I think is best (we’ll discuss that in a bit), but there is forward moving progress that gets overshadowed by the trumpeted hate.

Positive: Landmark is getting updates. How long did fans suffer through radio silence? For many months we heard nothing, saw nothing. That has changed, and the fact that the game is getting biweekly updates since the end of May is a good thing.

Many of these updates are focused on the storytelling system, which is arguably the highlight of the game. This system is becoming more robust, with features that expand the control players have in designing, populating, and scripting their events/dungeons. We now have a good selection of races to spawn, we have customizable NPC dialogue, and we have a variety of nodes to control everything from pathing to timers damage. There are even scoreboards now! On top of that, the play mode is improved to allow builders more customization, like whether folks can grapple or fly through the claim.

Positive: Some of these updates are exactly what players had been asking for. How long have we all wanted to have different appearance options and various races? A long while. Now players have the ability to alter appearance, size, and gender through the Crimson parlor. With the fantasy pack, you can make your character into another race. And more recently, Landmark introduced cosmetic pets.

Positive: Landmark is improving the experience for the non-builder. The improvements to the Chaos Caverns makes them a better and more interesting dungeon-crawl experience. Sure, the team has a long way to go, but with these and the ability to dungeon-dive player builds, there is something to do even if you aren’t into the construction aspect.

Made you sing! On a more serious note, if Landmark is not the game for you, or you feel too burned by the company to want to invest in any other products, that’s cool. I understand. I hope that folks in this position can find other games that they do enjoy and are worth their attention. Yes, I hope that folks can move on to better-for-them things.

I am not advocating they forgive or forget (though I do personally think forgiveness helps the forgiver more than anything, but that’s another topic). I am not advocating for people to like the game. I do, however, hope individuals with no interest in Landmark or in seeing it succeed will move on and let the game develop — or flop — on its own. Hanging around and bashing the game, the devs, and the studio does no one any good. In fact, it does bad — just not to intended target.

In the wise words of a ball of green wrinkles, “Anger leads to hate. Hate leads to suffering.” Yoda’s definitely on to something! Anger is a natural thing, and plenty is going to happen in gaming to make us angry. (Even me!) Anger likes to bust through the door unannounced, but that doesn’t mean we need to wrap our arms around it and snuggle. Clinging to and feeding anger brings more suffering upon the angry person. It rarely has any significant effect on the target of said anger. Why put yourself through that? Why subject yourself to something you don’t like?

Worse than those who just want to heap negativity are those who cross the line. Unfortunately, we’ve seen that for whatever reason, there are a few who just can’t leave it alone. To those I say: Stop. Just stop. Haters gonna hate? If that’s the case, the haters can be quiet about it. Let the rest of us enjoy the game and look forward to what it can become. Those who are spewing vile vitriol at Landmark and everything connected to it need to cease and desist. We get it. You don’t like the game, the studio, the devs, or someone’s socks. You wish terrible things on the game and all involved. You insult any fans. You fill comment sections with your rants. But I have had enough, and I know I am not alone in that sentiment. If you hate the game/company/devs enough to go far past criticism into outright viciousness, just don’t bother — keep it to yourself.

To be clear, I am not saying that everyone should be delusionally happy about everything, nor should fans necessarily avoid expressing negative feelings. That’s absurd. We can carry on discussions. We can and should still hold studios accountable, and we should still temper enthusiasm with skepticism whenever warranted. We can be happy about forward progress even while questioning decisions. Heck, it’s pretty clear that I am a fan, and even I don’t think all of the decisions lately have been best; just look at the implementation of the cosmetic pets. I just don’t feel that those who express nothing more than the downfall of Landmark or wish evil things on others have anything of actual value to add to the conversation. It’s a waste of your time — and ours.