Patch 7.1 is just around the corner for World of Warcraft, and it makes me just a little bit anxious. Why? Because the expansion has been out for a pretty short span of time, that’s why, and I remember the last expansion where we got a plethora of big patches early and then had a long stretch of nothing. That was Mists of Pandaria, and while that was, strictly speaking, better than what happened with Warlords of Draenor, it’s still not good…

But that’s not what I want to focus on today. No, today I want to talk about the lore going on just beneath the surface of Legion because it may be our best chance to do exactly that before things kick into high gear. After all, while we’re happily preparing to dive headlong into Karazhan, there are much bigger implications about the nature of what we’re really dealing with… and the not-so-subtle implication that Sargeras isn’t the enemy we once thought he was. 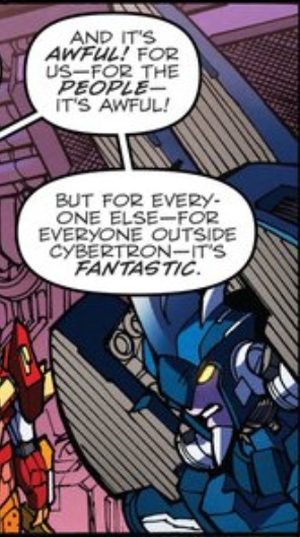 There’s a scene in Transformers: More Than Meets The Eye that sums the situation up pretty well: After traveling back in time, Rewind realizes that allowing an alternate history to develop will be terrible for every Transformer… but wonderful for every other race in the galaxy. He actively turns around and works toward it because he reasons that this is, at the end of the day, better for more people.

And that’s what Sargeras wants. He’s not simply destroying worlds; he’s destroying worlds that could grow to be Titans because if one of those Titans comes out corrupted by the Old Gods… well, that’s it. Existence is over for everyone. And Azeroth is the last of those worlds, and it’s already corrupted… possibly.

The fact is that this puts players and the story of the game in an interesting place. What we’ve always been working with has been a fairly simple binary conflict: Sargeras bad, Old Gods bad, Titans good, Azeroth good. What we now realize is that none of that is entirely true. The Titans were primarily concerned with making more of themselves and preventing those new spawn from being corrupted monsters, while Sargeras wants to cut off those corrupted monsters at the root, and the Old Gods want something else entirely. Something alien, really.

This means that, again, the races on Azeroth aren’t really fighting a grand struggle for good, just a grand struggle for our survival. At the end of everything, we’re not actually sure whether we’re fighting for something that won’t lead to the destruction of the entire universe because we don’t know how deep Azeroth’s corruption runs. We just know that Sargeras wants our world destroyed and he might be right.

This is an inverting to a lot of what we’ve known from the beginning about almost everything. Where shall we start? The Draenei, why not?

What we’ve always been told is that Kil’jaeden and Archimonde accepted Sargeras because he promised them power, while Velen rejected him. That’s the story everyone knows. But is it the true story? What if Sargeras told all three of them the truth? Suddenly, it’s quite possible that the other two leaders of the Eredar accepted not because they wanted power but because they realized that this was the one certain way to save their people. On the cosmic stage, the choice was between becoming demons or risk total annihilation.

Sure, Velen hasn’t ever said anything about this to anyone. But would you? If you were playing your last gambit to try avoiding the genocide of a universe when you weren’t sure you were right, would you tell everyone, or would you keep it quiet?

We’re told multiple times that this Legion is not the Legion Azeroth has faced before, and it’s true: It’s not. The previous advances of the Legion were meant to overrun the world, yes, but we had never borne the brunt of the assault. The Legion prefers to act with subtlety and avoid outright confrontation for many reasons, and part of it is avoiding the Old Gods and the Void Lords; the last thing Sargeras wants is to force a confrontation that could lead to exactly the sort of universal destruction he’s trying to avoid. This, however, is a full-on invasion, an attack that’s being put forth with all of the Legion’s resources so that they can stop this cancer before it spreads any further.

“Are you arguing that Sargeras is good?” Heck no. I don’t think there is good in this scenario. I think there’s existence and nonexistence, and our characters just happen to be caught in the crossfire between factions far bigger than themselves. We’re following the Titans because they’re the only option that allows us to get to continue existing, but the reality is that there are other factions at play here. We, as players, have only the barest glimpse of this. 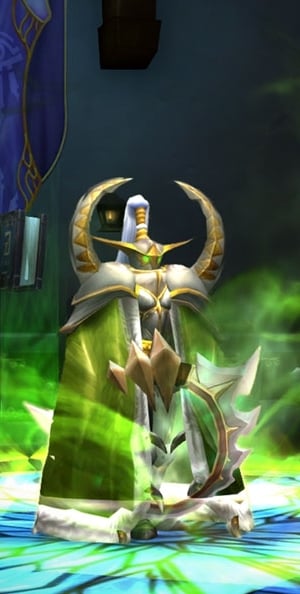 And I think that makes this expansion particularly interesting, not because it means we can fail – let’s be real, we are always going to wrap up this expansion by kicking the Legion out – but because it means that there’s ambiguity about what happens next. The very nature of the game means that we will more than likely win, but it doesn’t necessarily tell us what will happen next.

Far too often, this is a game in which conflicts are extended because writers can think of nothing more interesting for characters to be doing, a continued fight simply for the purpose of having a continued fight. Here, though, we know that this struggle is a very real one for the fate of all of Azeroth and beyond. And our next port of call could be literally almost anywhere and could involve facing off against all sorts of enemies, because the Legion itself is not our greatest foe. It’s not really our foe at all, in fact; it just needs to get rid of our world to make sure that the universe is still here tomorrow, and our continued presence is unfortunate but ultimately not the Legion’s problem.

It’s possible, of course, that I’m putting more thought into the surrounding lore and conflicts than Blizzard’s actual writers have. But it still strikes me as a pretty cool implication just the same, and I’d love to see the future of the game work on unpacking all of this.

As always, feedback is welcome in the comments below or via mail to eliot@massivelyop.com. Next time around, 7.1 will be live, and so I’m going to start examining that patch and letting you know just what I think of all that’s contained therein. (You know, beyond the obvious criticism of the dumb-as-heck Mythic-only option. I’ve talked about that before.)