END_OF_DOCUMENT_TOKEN_TO_BE_REPLACED
After some of the major flaws with Knights of the Fallen Empire, I wasn’t expecting much from Star Wars: The Old Republic‘s latest expansion Knights of the Eternal Throne. It was more than clear, given the last two chapters of KOTFE, that the previous expansion was a setup for the current expansion. In fact, that’s probably the biggest flaw for KOTET: It doesn’t stand on its own. However, BioWare has taken lessons from its previous mistakes and made an expansion that not only is entertaining as a story — which BioWare has never had a problem with — but features mechanics that are interesting and a vast improvement over the boring murder-tunnels of the last expansion.

Games ultimately prompt us to ask the question, “Is it worth the money?” I don’t have an exact quantifiable measurement for fun had in a game versus its cost, but if we took my typical judgment that one fun hour should equal to one dollar spent, then at the cost of $15 dollars for a month’s subscription (which earns you the expansion), it’s a steal. I did have a couple of hours of interruptions, but I started playing the expansion when it first launched at 9 a.m until about 3 a.m. last night. I could have given my first impression on the first few chapters of the expansion, but the truth is that I didn’t want to stop playing.

“I could have given my first impression on the first few chapters of the expansion, but the truth is that I didn’t want to stop playing.”
We will dive into some of the elements of the single-player campaign, but I promise not to mention parts of the story that were not already talked about by the developers or that didn’t occur in Fallen Empire. If you want to remain completely untainted by story elements, then you can stop reading here and subscribe to SWTOR and experience The Eternal Throne for yourself. Otherwise, continue reading — we’ve got some fun things to talk about.

Doing what BioWare does best

Knights of the Eternal Throne picks up almost immediately after the dissatisfying ending of the Knights of the Fallen Empire. Although the now-Empress Vaylin had time to change her headgear and rip the sleeves from her shirt to expose her tattooed arms, no one else in the story even had time to change shirts. Even Theron Shan is wearing what has to be the dingiest jacket in the history of Star Wars since Luke Skywalker’s clothes from Dagobah.

I really cannot talk about some of the major story elements of The Eternal Throne without major spoilers, but I can convey my feelings regarding the endings of the last two expansions without spoiling the specifics of The Eternal Throne‘s ending. It’s hard to explain why people need closure, but it was clear that when Arcann escaped with his mother in the last chapter of Fallen Empire, there wasn’t any closure. After seeing The Eternal Throne storyline to the end, I now understand that choice on the writer’s part. In fact, The Eternal Throne cleans up so nicely that I find it difficult to imagine what BioWare will do in the next expansion.

Wacky side note: Read my wild speculation about KOTET that I wrote in July, and see which story elements I got right before the last chapter of KOTFE was released.

Making up for the previous expansion

A repeated theme in many of my reviews of the former expansion’s chapters was that the mechanics were far too easy and unfun because of it. Most of the time, the bosses could be downed by players who just DPSed-through any mechanics that they did have. Even some of the more complicated mechanics like the Arcann fight were made uninteresting because the risk was so low.

I hate to admit this, but I died a during a couple of the fights in the story-mode version of the main-story playthrough of The Eternal Throne. It’s possible that I am just bad, but I like to think that I’ve learned a thing or two about the game after having played it for the last five years. No, I really think that the mechanics of these boss fights are more interesting and nuanced than they were during the last expansion.

It’s no secret that you eventually fight Vaylin. I’m not going to reveal all the mechanics of that fight, but unlike some of the fights in the previous chapters, you can’t just sit there and absorb everything that she throws at you. Even in my Advanced 216 armor, I wasn’t able to just soak everything. I had to step out of certain mechanics and even employ some interrupt abilities to even survive the fight.

Overall, the fights aren’t difficult if you’re familiar with MMO mechanics, but they are interesting enough to make repeating some of the chapters more fun. 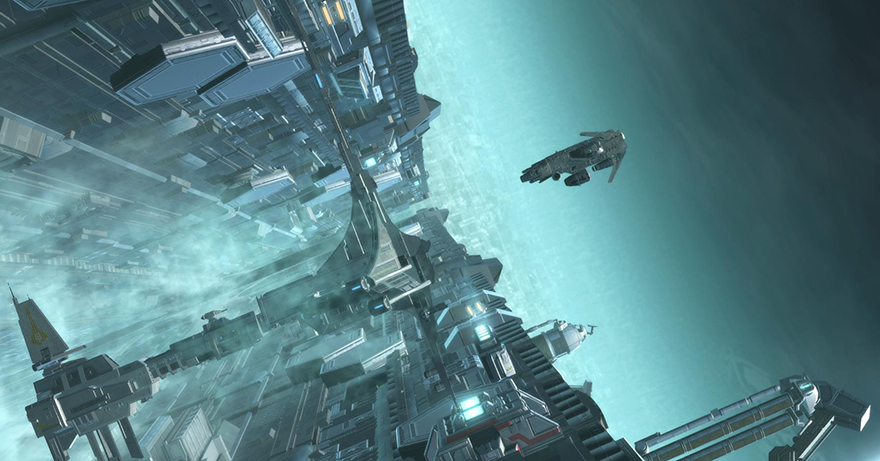 If you’re in early access for Knights of the Eternal Throne, I hope you’re enjoying it, and we will be able to talk about some of the deeper story elements once the expansion goes live for everyone. For everyone else, if you’ve not subscribed to Star Wars: The Old Republic yet, then I certainly recommend that you do that now. If you’re a returning player, you might want to jump into this expansion with fresh eyes, even make a new character. Many elements, like multiple class quests, are no longer a part of the game, so it might be disappointing from that perspective. However, if you take the last two expansions by themselves, then you have a very interesting and engaging set of stories.

Knights of the Eternal Throne officially launches tomorrow, December 2nd. All you have to do is subscribe for a month to get it, which is $15 US. You’ll get at least a full day’s worth of gameplay and storytelling besides the new group content and repeatable story and veteran modes of both KOTFE and KOTET chapters. I highly recommend you try it out, if for no other reason than to see where the game has grown over the last five years. But you should really buy into it because BioWare is still making engaging and exciting Star Wars stories.

The Daily Grind: How long are you willing to wait for...