Who else was disappointed by the Star Wars: The Old Republic presentation at Star Wars Celebration over the weekend? I had really hoped that it would be more, but I guess it’s difficult to give too much information about a story-driven expansion when the last expansion hasn’t even finished its story yet. But that doesn’t mean they couldn’t tease something other than a vague slide key art.

Today, to make up for the lack of information, I am going to propose some wild speculation about Knights of the Eternal Throne. As I do this, I should warn you now about two things. First, there will be spoilers contained in here. If you don’t want to hear about some of the things that happened in the latest Knights of the Fallen Empire chapter, then stop reading. Secondly, everything that I am speculating about is just that: speculation.

If you’re still reading, let’s have some fun.

Now that Scorpio sits on the Eternal Throne, she will need some followers. Vaylin is far too wild to side with the Outlander and the Odessen Alliance, and I seriously doubt that we will actually kill Vaylin at the end of Knights of the Fallen Empire. No, I think that she will survive and make it back to Zakuul after the battle of Odessen. In fact, I think she will make it back to Zakuul and ally with a kindred spirit: Scorpio.

It’s been speculated for a long time that the player might ultimately have one of the twins as a companion, but mostly I think that was a misinterpretation of the teaser page for Knights of the Fallen Empire. However, I think it would be a very interesting twist if we actually had to eventually take him as a companion. I believe that Arcann will be captured at the end of KOTFE and will become a key player in KOTET.

Anyone who knows about Zakuulan society will no trouble understanding this speculation. The majority of citizens of the Eternal Empire want for nothing and were extremely distraught when Kaliyo Djannis knocked out their droid’s power. Zakuulans rely on those droids to do everything for them already, so it’s not a big step for them to accept a droid as a supreme overlord, especially if Scorpio maintains the status quo for them. 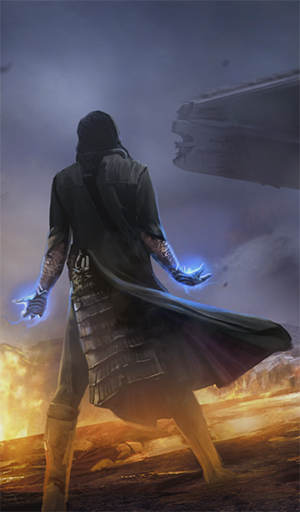 I’m going to say that it will be a raid because I’m hopeful. Producer Ben Irving explained in the latest producer livestream that the SWTOR development team was working on new group content. I do hope that it’s a raid. Regardless, it will be group content, and I believe that it will take place on a shattered Odessen. But who will be the main boss? I’m going to go with Vaylin. She teams up with Scorpio, as I said, and commands an army of droids that are essentially holding Odessen hostage.

We all know that BioWare is no larger making new individual, factional class stories. And in the latest warzone, you can be teamed up with players from the opposite faction. The next logical step is to get rid of factions all together. Of course, we will still have the class stories and general PvP, but anything beyond the main story will pair up both faction in a single instance. I also believe that BioWare will push towards PvP and other endgame content to be cross-faction as well.

SWTOR Central made this speculation, too, and I’m going to ride with him on it. I think we will see two new classes or more likely, one new class and two advanced classes. I’m thinking that this will be an instant 60 class only. And its story will be a short five levels. I believe you’ll see where I’m going with this when I say that the class name is Zakuul Knight.

I’m not sure where this will fall in the story. It might even happen at the end of KOTFE. I believe the reason for Valkorian’s disappearance is so that he can infect Scorpio. I don’t know that he will succeed, but it will be a key point to ultimately dethroning the droid. Perhaps that’s what he planned all along; I can’t be sure. But you know he knew what Scorpio was when he first saw her through your eyes in the Lady of Sorrow’s chapter.

You lead the Zakuul Knights

It might be obvious given the title of the next expansion, but the Knights will eventually fall under your command. Here’s the thing: Scorpio would clearly rather have droids protecting her, and Vaylin really dislikes the Knights all together, what with her calling them incompetent all the time. Where are the Knights supposed to go? To you, of course. And if I’m right about the new class, then we know for sure that the Knights will join you.

Travel to the Chiss Ascendancy

One of the biggest mysteries surrounding vanilla SWTOR was the Chiss Ascendancy. We know that ultimately this group becomes reclusive again, and we know that before SWTOR the Chiss were isolationists. But we never found out why the Chiss ultimately signed a treaty with the Sith Empire, nor why the Emperor didn’t attempt to conquer them. I believe that it has to do with the proximity of Zakuul to Csilla and the other Chiss worlds. I believe the reason they joined up was because Valkorion convinced them to, and the reason why will come to light in KOTET.

Vitiate will end up on the throne again

Regardless of what happens in the interim, at the end of KOTET, Vitiate/Valkorion will end up on the throne. I believe that everything has to ultimately come full circle and the ultimate enemy has to take the seat of ultimate power.

I’m probably wrong about all of these, but which ones are your favorites? Which are the most likely; which are the least likely? Would you be more likely to play KOTET if all these things became true? Let me know in the comments, and I will see you next week.