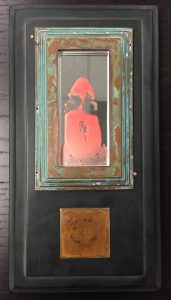 … that time when Richard Garriott sold his blood for Shroud of the Avatar, as we wrote in a pair of articles over the summer.

The real story is a little bit more complicated, of course. Shroud of the Avatar’s Richard “Lord British” Garriott and Starr “Darkstarr” Long donated their blood to be used in 10 pieces of “blood reliquary” artwork created by Steve Brudniak; the artwork was then put on Ebay for an initial bid of $5000, though they were moved to the game’s website following what was likely an issue with Ebay’s rules. The price has increased as each one sells, and they do indeed sell; as I write this, in December, only one Lord British reliquary remains for sale (at $13,000), while two Darkstarr pieces remain (at $12,000 and $13,000).

Proceeds from the sales benefit both the game and a designated medical charity, which is actually pretty cool.

The blood thing wasn’t the first such story for SOTA, nor was it to be the last. In fact, Richard Garriott gave away part of his rat tail in January as part of a promotion and donated an in-game replica of his skull to a player tavern in November. Hey, it made headlines — and it helps keep the game online.

As a fun side-note, the gamer who won the rat tail, Sara Dreygon, dropped by our comments a few months back. Naturally, we asked her what she did with such a weird item. Here’s what she told us:

“He sent it to me in a nice silver reliquary (once again, for free) and it’s sitting in my game room next to some of my awards. I figure with Richard Garriott being a visionary in the role-playing industry with Ultima, Ultima Online (both of which I’m huge fans of from growing up), and soon to be SOTA (if you’ve followed the development for the last few years you’ll know how well the game has come along), it might just be worth some money some day. Especially seeing as two pledges that contained his blood reliquaries (among a ton of other digital items such as a castle lot deed) sold for $6k and $8k in the first day after they were put up for sale.”

Thanks for playing along with our weirdest stories countdown, and don’t forget to check out our annual MMORPG awards and our blooper awards!