END_OF_DOCUMENT_TOKEN_TO_BE_REPLACED
If you have yet to experience the conclusion to the traitor storyline from the latest story update to Star Wars: The Old Republic and you wish to remain unsullied by the twists and turns, then you will want to turn back now because we are going to be diving into spoiler territory here. Here we go… three… two… one… Darth Vader is Luke’s father! OK, seriously, you’ll want to read this later if you’ve not played through Update 5.9.

The traitor story left us with a lot more questions as to where the story was going, but it was oddly satisfying at the same time. I wanted more, but I felt that the end answered enough immediate questions without answering all of them. There were so many questions at the end of the storyline that it might even be considered a cliffhanger.

Today, I’m going to do one of my favorite things to do with SWTOR: I’m going to speculate. I’m going to take what I’ve seen from the past of the game and attempt to predict its future. I have three unanswered questions that will shape the future of SWTOR. And we will start with the big one.

Which faction will we join?

At the end of the traitor story, the Outlander is asked which faction he (I’ll say “he” because that’s what my character is; apply your own gender or lack thereof as you like) would like to side with. Unfortunately, Hutts were not one of those factions, but I will make do with Imperial or Republic because those are the primary factions that have been in the game since launch. To add another faction at this point would just make things more complicated than necessary.

I am hoping that this choice is an important choice. I hope this choice actually places my character in that faction. That means, if my character is Imperial and chooses to side with the Republic, then he would be able to visit Republic-only territory. For instance, it would be great if I could now visit Coruscant unrestricted. Or maybe I could visit Republic territory on Nar Shaddaa without being attacked by the guard droids. But that would also mean that I am a Sith Warrior who is now attacked by Imperial NPCs because I am seen as a traitor.

As an added bonus, I would like to hear some dialogue changes that reflect the change in faction. I don’t just mean during the cutscenes, which is obvious. I would like to hear people around Carrick Station whisper, “Didn’t he used to be an Imperial? I don’t know if I can trust him.” 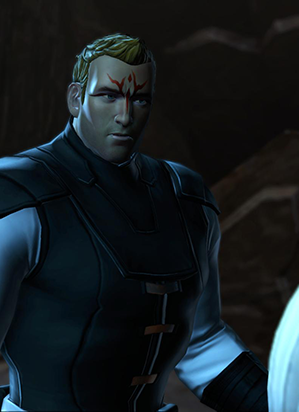 Can SWTOR go back to its roots?

I would have to dig up the article on the old Massively website to properly express how excited I was about the Forged Alliances storyline that was the precursor to the Shadow of Revan expansion. But to sum up: I thought that SWTOR was finally getting back on the right track by focusing on the conflict that made the game interesting in the first place: the Republic-v-Empire war.

As a group, the fans of SWTOR weren’t too excited about Rise of the Hutt Cartel, but one of the features that I believe everyone enjoyed was the idea that the Republic story was completely independent of the Imperial storyline. Although one story fed off the other, the storyline itself was different based on whether I was a Republic character or Imperial.

Given the disparity in storylines now — Is Acina alive? Am I romancing Koth? Is Arcann on our side? —  the potential for diverse and interesting stories even within each faction will add enough flavor to make a good story a great story. For instance, I loved the way that Nathema was handled. Depending on your class and depending on your choices within that class, a different character talked to you before sending out the Temple Guardian boss.

Can my character remain mine?

When SWTOR first launched, my Sith Warrior felt just like every other Sith Warrior because the armor, ship, and companion that I had was the same as everyone else because it was either the one that was given to us by default or it was the best one to have because of game mechanics.

Since launch, SWTOR has added a plethora of things to help make my character feel unique. I can now dress the way that I like regardless of what my armor stats are thanks to the outfit designer. The variety of different weapons has also increased dramatically, despite that I have to stick with dual sabers as a Marauder or a long rifle as a Sniper. Strongholds have also played a major role in keeping characters unique. But for all of these changes, there is one downfall: You have to spend real-life money to keep up with the Joneses.

I never liked the idea of loot boxes, and unfortunately, that was the only way to get the best looking armor in the game. I am very thankful that early SWTOR designer Damion Shubert helped institute the idea that everything sold on the Market could be sold on the Galactic Trade Network (auction house). But I believe that it should really go beyond that: There needs to be exciting armor, weapons, and other cosmetic items that are available just by playing the game.

The Traitor Among the Chiss and the Nathema Conspiracy updates gave us some excellent additions in both categories. I really thought the two different Chiss outfits added to the replayability of that flashpoint, and although I didn’t replay Nathema a whole lot, I can see why some people did because the decorations in that flashpoint were really good.

As an aside: I understand that a game cannot live on just a subscription or box-price any longer because of the sheer size of the team needed to create an excellent-looking game. So I’m not opposed to the Cartel Market (cash shop) itself. In fact, the way that SWTOR is handling many of the items in the market now is great. BioWare is doing limited-time sales, which I know will frustrate some people, but understand the necessity of them. BioWare needs to create a sense of limited quantity. But most of the items now are not lootboxes or lockboxes. What you see is what you get, and I am very happy about that. I’ve even started buying more things off the market now that I know what I’m getting.

I think it’s working, and we will definitely need to see more great items come out of updates and more direct sales on the Cartel Market.

What do you think? Do you think these additions will add more of what’s needed for the game? And bonus question: Do you think you can come at SWTOR with fresh eyes? Do you think if you could that your opinion of the game would be different now? Let me know your thoughts in the comments.